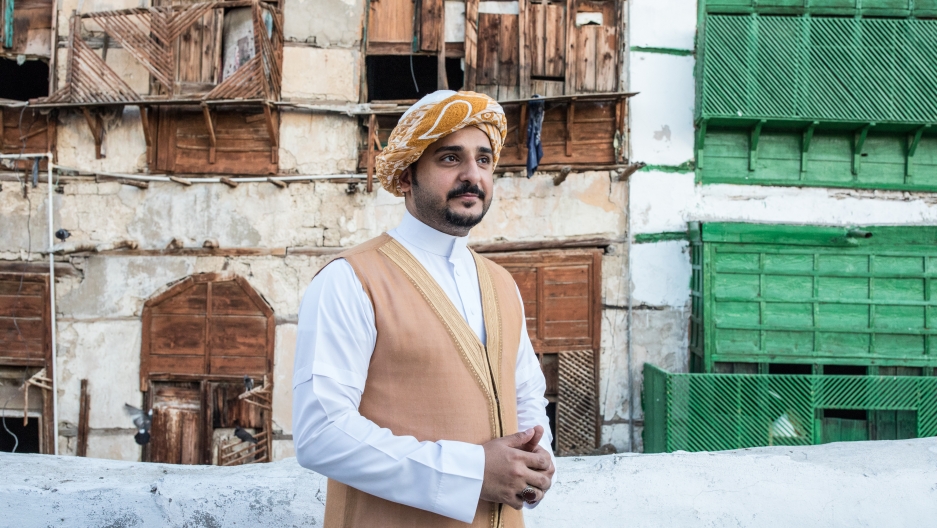 Kamal, a tour guide in Jeddah, Saudi Arabia, is passionate about showing people his hometown.

Twenty-something Kamal, a software engineer by day, moonlights as a tour guide in Jeddah, Saudi Arabia, in the evenings.

Kamal, who didn’t give his full name, doesn’t get paid to do this and isn't employed by an agency or anything. He was born and raised in the old port city, al-Balad, or The Town, and his family has been here for generations.

“A lot of people, when they finish their job, they stay at home or go gather with their friends. When I finish work, I like to come here.”

So, it’s personal for him, a kind of passion project. “A lot of people, when they finish their job, they stay at home or go gather with their friends. When I finish work, I like to come here,” said the bubbly Kamal, standing near where a gate used to be, the place where people once entered the old town on camels. “This is the route that people used to take from here straight to Mecca. They used to ride on camels, horses or just walked.”

Although Kamal is a volunteer, sometimes people are so charmed by his tours, they go out of their way to repay him. “One time, I gave an American guy who was living in Saudi Arabia a tour for free,” Kamal recounted. “He said, 'Take this money,' and I said, "I am not taking it." The next day, he invited me to his house, and he gave me a gift worth 1,000 Saudi rials [about $260]. I was embarrassed to take it, but it was a gift so I did.” 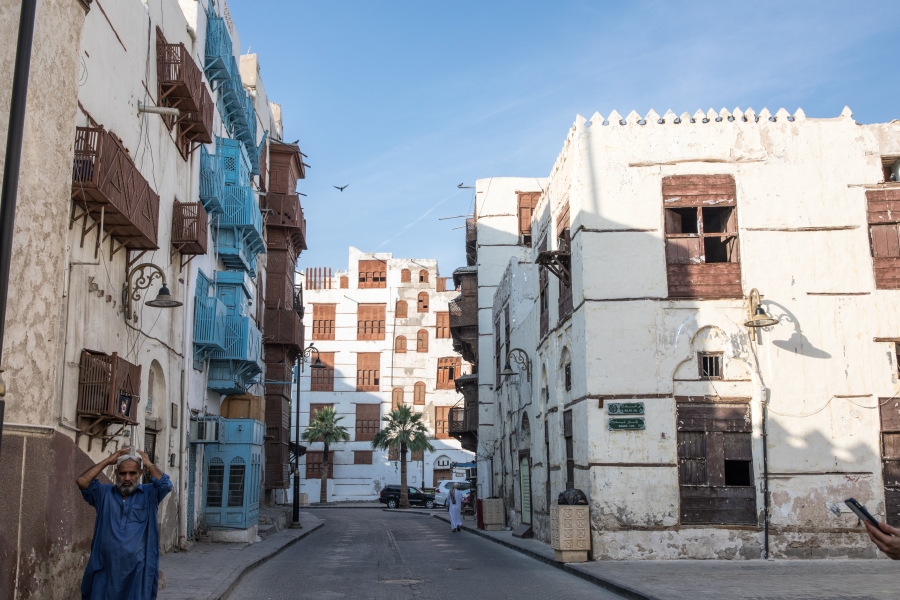 Al-Balad, the historic part of Jeddah, Saudi Arabia, is one location authorities are hoping more tourists will visit over the next decade.

Making Jeddah and other Saudi cities a bigger draw to national and international tourists is something that the government is banking on, too. Crown Prince Mohammed bin Salman al-Saud laid out in his Vision 2030, his blueprint for the next decade, a plan to transform Saudi Arabia into a popular tourist destination. It’s one way that the crown prince, more commonly known as MBS, is looking to diversify the kingdom’s economy. Getting women behind the wheel, and into the workforce, as well as opening up nontraditional types of jobs, are also part of the larger plan to steer the country away from oil.

According to the World Bank, in 2016, about 18 million people visited Saudi Arabia, slightly higher than the previous year. MBS wants to up that number to 30 million visitors by 2030. Saudi officials have announced plans for several major entertainment projects including theme parks, cinemas and a $500 billion futuristic city run by robots.

Muzzammil Ahussain, executive vice president of Almosafer, a Saudi online travel platform, said in the Arab News, “The impact of these investments on travel is yet to be seen, but we believe there will be an overall positive trend for the travel industry in the Kingdom, boosted by the promotion of domestic travel and staycations around events in the Kingdom, as well as potential increased inbound tourism to Saudi in line with major events such as the recent Formula E Racing event in Riyadh.”

He said his group projects that in 2019, “some of the travel trends for Saudi consumers will be increased duration of stay, continued momentum and growth around religious tourism, and more interest in resort-based destinations.”

There has been some pushback from some Saudis, though, about “the potentially corrupting effects of increasing numbers of tourists, but the government has made efforts to avoid provoking more conservative elements in Saudi society," a Foreign Policy article says.

For a long time, besides pilgrimage, Saudi Arabia didn’t see tourism as essential for its economy. Rich in oil, the kingdom wasn’t pressed to look for other sources of income.

“Historically, Saudi Arabia has been a relatively isolated country.”

“Of course, it’s quite connected to the global economy,” Diwan added. “But in terms of being welcoming, to have people come in, visit, it’s been a rather difficult country to visit.”

Related: At the Riyadh mall, Saudi women sell everything from lingerie to popcorn. Meet the kingdom’s new workforce.

The segregation of men and women in public, ban on alcohol, strict rules on how women dress — all that didn’t exactly scream summer vacation to most outsiders.

But more recently, Saudi rulers have relaxed some of its rules in the push to attract more tourists. In 2018, it began issuing tourist visas, including electronic permits. Still, there are plenty of hurdles, especially for women visiting the kingdom. “Female solo travellers over the age of 25 will be able to obtain a 30-day tourist visa, but those under 25 will have to be accompanied by a family member,” the Telegraph reports.

But the recent murder of journalist Jamal Khashoggi, arrests of women's rights activists and the bombing and starving of civilians in Yemen could make tourism a harder sell.

“The problem is both the killing of Jamal Khashoggi and also the arrest and alleged torture of women activists, that completely runs counter to the new image they [the Saudis] were trying to project.”

“The problem is both the killing of Jamal Khashoggi and also the arrest and alleged torture of women activists, that completely runs counter to the new image they [the Saudis] were trying to project,” said Diwan.

Diwan thinks the recent events are a problem for the kingdom’s ambitions. Yet, she says, Saudi Arabia’s reputation as a place where tourists don’t go might actually work in its favor.

"The selling point for Saudi Arabia will be that it’s a new site and that it will bring in some of those people that are curious to see a country that hasn’t been visited as much and to see new sites that haven’t been developed," she said.

For now, Diwan thinks the government's main target is Saudis themselves. Many vacation abroad and the government wants them to spend that money at home.

Jeddah, a port city on the Red Sea, is a gateway to two of Islam’s holiest cities — Mecca and Medina.

For decades, pilgrims from all around the globe descended on the city. They came from the sea and brought with them their food, culture and language.

That’s why you’ll find a Chinatown. Dumplings with a good dose of hot sauce is a favorite street food here.

Today, Kamal wears a crisp, white robe, tan vest and a traditional hat that’s similar to a turban — his uniform on these tours — as he strolls through the narrow, cobblestone alleys. Usually, he approaches visitors and offers to show them around. 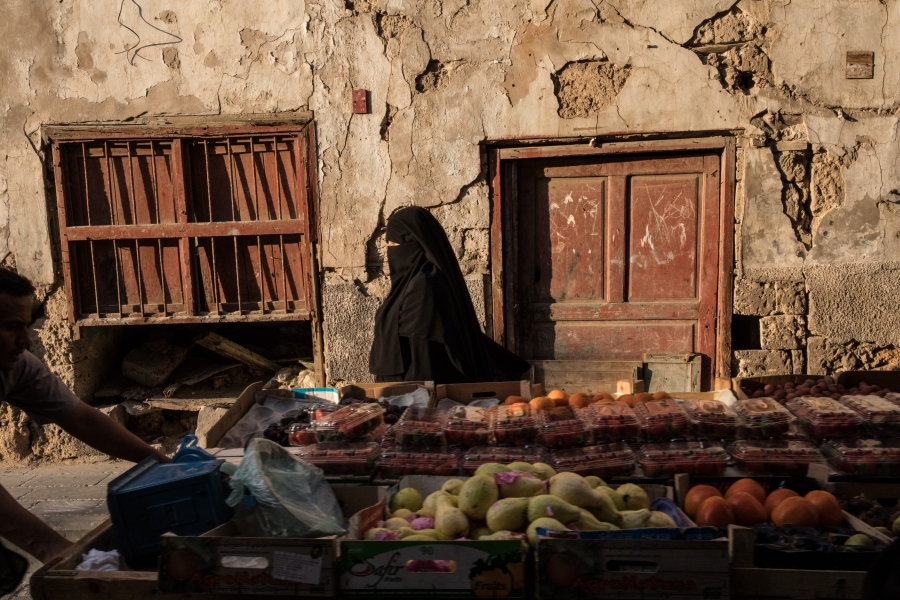 A woman passes a cart carrying produce in al-Balad, Jeddah.

During his tours, he points to major landmarks in addition to some of his favorite sights, like where he played soccer as a kid — a narrow alley. He has fond memories from just about every corner, he says.

Kamal says that over the past few years, the Saudi government has managed to get several of the country's historic sites to be included in the UNESCO World Heritage list. The old town itself was added to the list in 2014. In addition to the government trying to make it easier for foreigners to get a tourist visa, it has promised scholarships to Saudis looking to study tourism, as well.

Of course, Kamal is partial to Jeddah and its old town. It's a very unique part of the country, he says, because of the architecture. The houses, for instance, which date back to the 7th century, are made from coral stones and wood. There's also the famous Corniche Beach, a floating mosque on the Red Sea and King Fahd's Fountain, which is said to be the world's tallest, of its type. 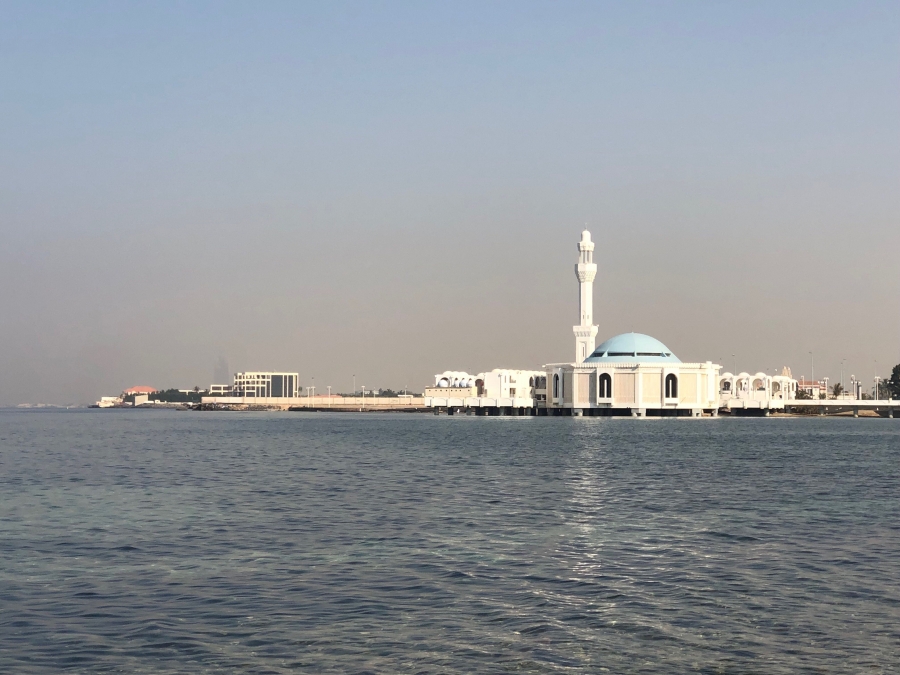 The floating mosque can be found alongside the famous Corniche in Jeddah, Saudi Arabia.

In his spare time, Kamal reads a lot about the area's history. Also, his father was born here, and he learns a lot from him, too. “This is like the fun time for me,” he said.

On this mild winter day, carts pass by carrying heaps of red tomatoes. A handful of men sits on a street corner, in a circle, taking their afternoon tea. It's an informal affair, but there's a table with a fiery red tablecloth.

Among them is 72-year-old Salem al-Qurashi, a retired civil servant. He says he lived in Miami for a while. So did his four sons. Qurashi says he comes here every day to meet up with his friends, drink tea and discuss the day's news. Today's topics: the US government shutdown, Donald Trump's wall and Saudi politics.

But there's one topic he didn't want to broach: Jamal Khashoggi’s murder and whether it's changed people’s perception of his country. "Why are you talking about Khashoggi?" he asked, fuming. "It’s a small problem. The Turkish, they’re making a big deal [out of it]." 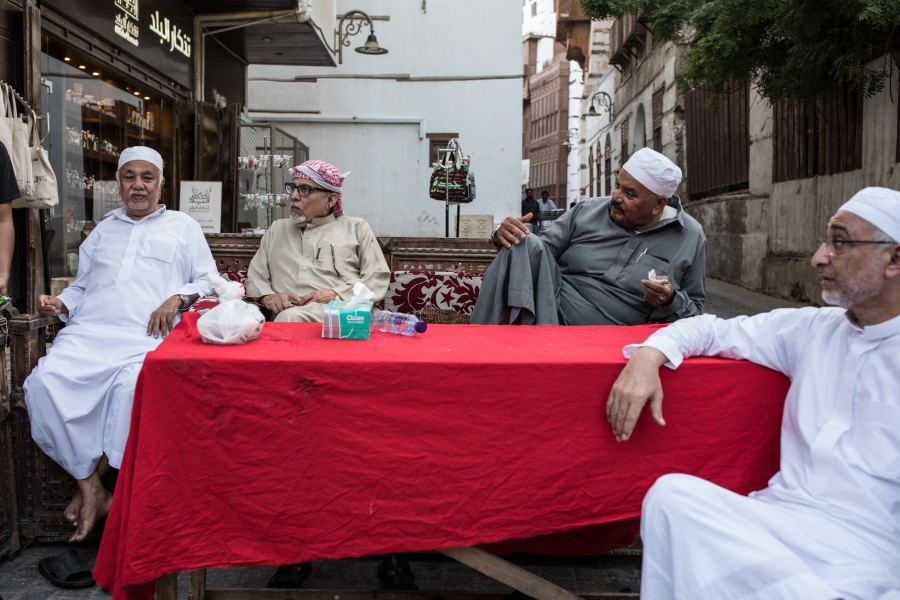 The way Qurashi sees it, the Khashoggi story was played up by Saudi Arabia’s rivals such as Turkey and Qatar, with the goal to undermine the kingdom.

"There is a problem all over the world, but we are better than the others. Really. We feel it."

"There is a problem all over the world, but we are better than the others. Really. We feel it," he said.

Shortly thereafter, the long, winding tour with Kamal drew to a close.

Kamal is optimistic that tourists will visit this place that is near and dear to him — and maybe even bring a few more good restaurant options to the port city along the Red Sea.

And when people do come, he says, he’ll be on hand to show them around.

Editor's note: The Saudi government requires visiting reporters to be accompanied by a government minder at all times.