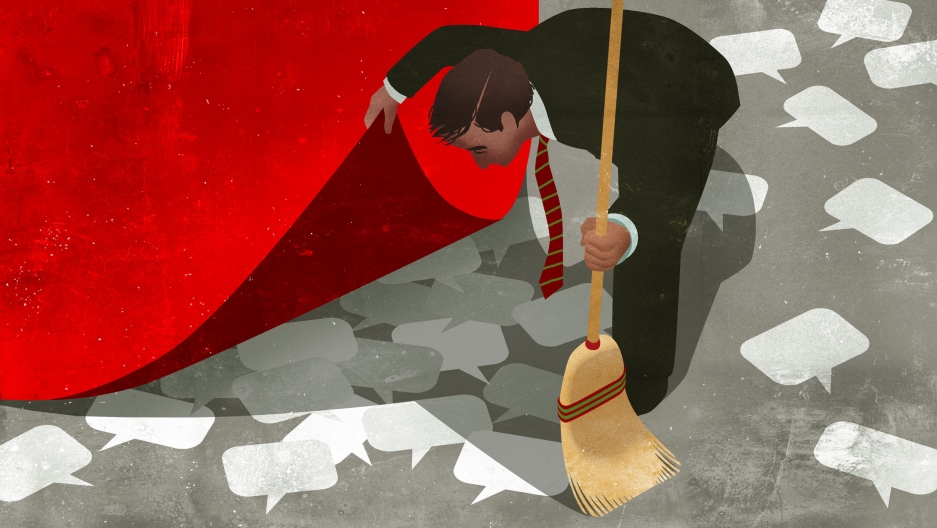 When opposition politicians in Hungary were thrown out of the offices of the national public broadcaster MTVA in December, the incident was reported by news organizations around the world. But MTVA was silent about both the event and the anti-government protests taking place outside its own building.

Hungary now ranks 73rd out of 180 countries on the Press Freedom Index, developed by Reporters Without Borders — that's a drop of 50 places since Viktor Orbán returned to power in 2010.

Hungary now ranks 73rd out of 180 countries on the Press Freedom Index, developed by Reporters Without Borders — a drop of 50 places since Viktor Orbán returned to power in 2010.

A video of the opposition politicians being forcibly removed from the television building was filmed by Bernadett Szél, a member of parliament. She says the politicians wanted to have a list of their demands read out loud on air. The demands related to recent changes made to the country’s labor laws, dubbed the “slave laws” by trade unionists. Under the new laws, workers could be forced to work 400 hours of overtime a year — and employers can withold payment for up to three years.

Szél says the opposition’s views are rarely broadcast on state television. The lawmakers requested to speak to station managers, but instead, security guards were sent to escort them from the premises. The video shows her fellow MP Ákos Hadházy being physically dragged along the floor of the TV offices towards the exit. 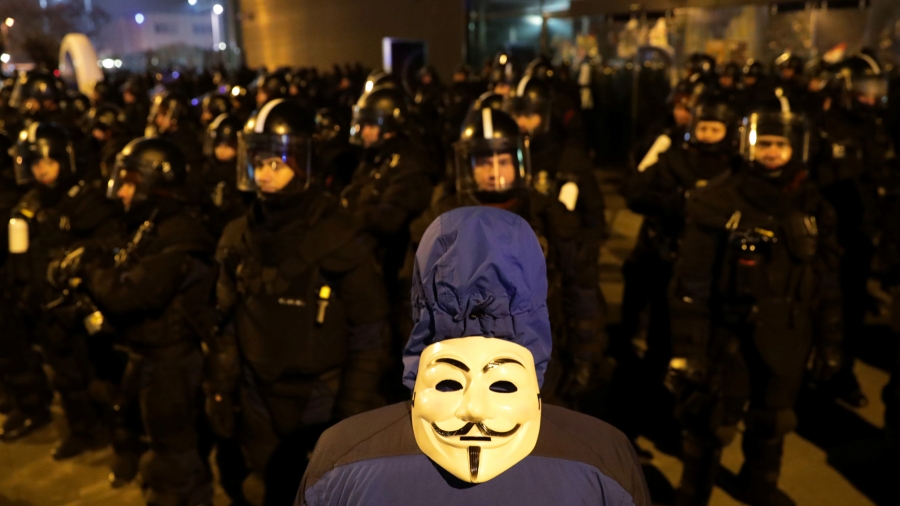 A demonstrator wears a Guy Fawkes mask on the back of his head while facing rows of police wearing riot gear during a Dec. 17, 2018 protest against a proposed new labor law, billed as the "slave law," outside the headquarters of Hungarian state television in Budapest.

Origo, the second most-read news website in Hungary, is a good example of how the media landscape has changed during Orbán’s tenure. The site is openly pro-government and regularly features negative stories on immigration and critical features about opposition politicians. It wasn’t always like this.

András Petho is the co-founder of investigative news site Direkt 36 and formerly a senior news reporter with Origo.

András Petho, co-founder of investigative news site Direkt 36, was formerly a senior news reporter with Origo. He says the site, which was owned by the Hungarian company Magyar Telekom, encouraged investigative journalism and critical stories about all politicians and parties. Then in 2014, he began to notice a change in the direction of the site. Journalists started to feel pressure from management about the content they were producing.

“They came to us with very unusual requests,” Petho says. “Not to pursue certain stories. And then later, to remove other stories from the website.”

The reporters always refused, Petho says, but things came to a head when editor-in-chief Gergo Saling was fired in the summer of 2014. His dismissal was related to a story Petho wrote.

“It was a simple story, about the unusually high hotel expenses of a senior government official,” Petho says.

Petho says he had no option but to resign, too.

Details of what happened are murky but by 2015, the site was sold to the family of Viktor Orbán’s former finance minister. 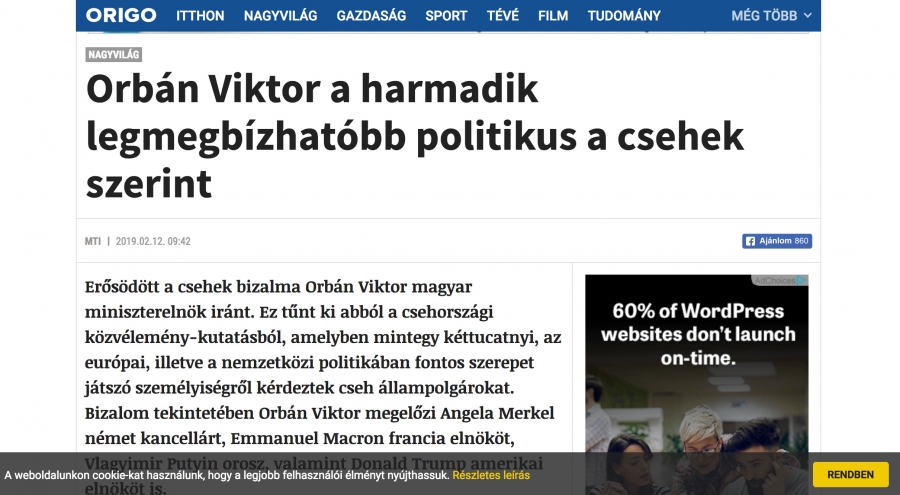 The headline on this Feb. 12, 2018, story on Origo translates to "Viktor Orbán is the third most trusted politician, according to Czechs." Origo is the second-most read news site in Hungary. The site is openly pro-government and regularly features negative stories on immigration and critical features about opposition politicians.

Current news editor András Kovács says it is no secret where the political leanings of the site lie. He says that staff who left the organization in 2015 were simply ready to move on to other news outlets.

The changing media landscape has not gone unnoticed among other European leaders. The European Parliament recommended disciplinary action against Hungary in 2018, citing concerns about freedom of expression, academic freedom, judicial independence and the treatment of asylum-seekers.

Pauline Adès Mével, head of the European Union and Balkans desk at Reporters Without Borders, says she welcomes the move, but worries EU bodies lack any real power to alter the situation. The problem, according to Adès Mével, is that any action against Hungary effectively requires a unanimous vote by the European Council, and countries such as Poland are unlikely to support such action.

The press watchdog was further alarmed when the owners of hundreds of private news outlets announced last November that they were donating their companies to the Central European Press and Media Foundation, a huge right-wing media conglomerate. Many of the publications were owned by allies of Orbán. The foundation now includes cable news channels, tabloid newspapers, all of Hungary’s regional newspapers and several radio stations.

Independent media outlets do exist in Hungary, but they struggle financially. State-owned companies are among the biggest advertisers on media but are unlikely to advertise with independent news sites.

Daniel Rényi is a political journalist with 444, an independent news organization, which depends on advertising and reader donations to survive. Rényi says Hungarian companies are, in general, nervous to be seen advertising with media organizations that are critical of the current regime.

“We are aware of the fact that many companies are not willing to put advertisements on 444,” he says. “Not that they are directly threatened by the government, but they receive the signs that money could come from a better place.”

"The government has such enormous power in Hungary."

Èva Bognàr, senior program officer with the Center for Media, Data and Society at the Central European University in Budapest, agrees. She says state-owned companies make up the largest chunk of media advertising.

“It means some pro-government media outlets have money flowing into them, while other independent sites have to close their business through lack of funding,” she says.

Independent news sites can also find themselves effectively ignored by the government. An EU parliamentary report in 2018 concluded that while media in Hungary is concentrated in the hands of pro-Orbán oligarchs, journalists from publications that are not pro-government are often banned from parliament. Investigative news website Direkt36 rarely receives a reply from the government on stories linked to state officials or their dealings.

Co-founder András Petho tries to remain optimistic. He says despite pressure from pro-Orbán publications, their readership continues to grow. He says he believes there is a real thirst among young Hungarians for independent and critical news coverage.

Rényi of 444 says he believes it could be worse.

“The government has such enormous power in Hungary,” Rényi says. “They could go further. They have many tools they could use to be more critical of us. I think they are aware that they need to leave some air for opposition voices.”