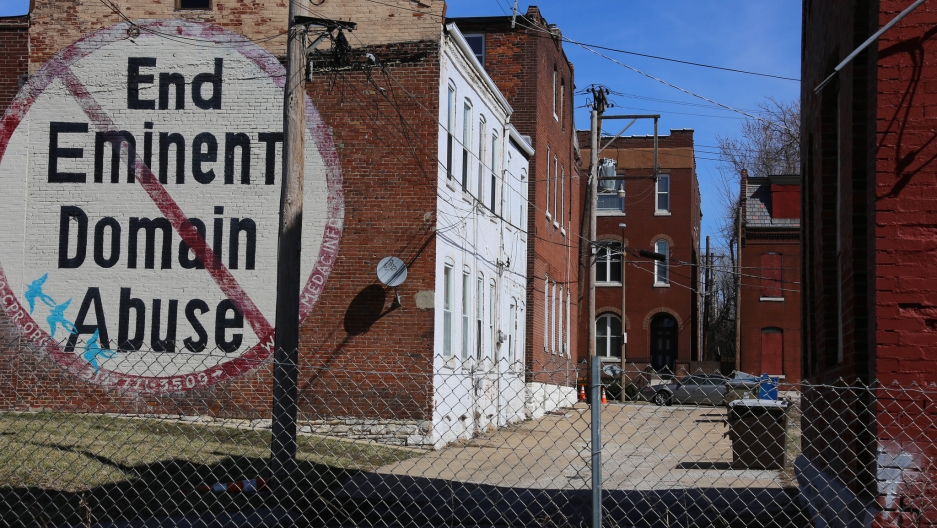 A government's power to seize private property for the public good often conflicts with residents' desire to hold on to property they have owned and lived in for years. In many cases, "just compensation" does not make up for the loss of a farmer's land or a person's home.

In the United States, a deed is defined as a binding legal document that grants you ownership over a house or a piece of land until you sell or pass that property on to your heirs. But at any time, the government can use its power of eminent domain to take that property for a project that it considers to be for the greater public good.

The project might be an unpopular oil pipeline, a highway — or a border wall.

If the Trump administration wants to build a southern border wall, it will have to rely on its power of eminent domain to acquire much of the necessary land.

Even when the project offers a substantial payout, some people just don't want to leave their homes, and a fierce legal battle can ensue. The issue of eminent domain has gotten increased public attention recently because if the Trump administration wants to build a southern border wall, it will have to rely on its power of eminent domain to acquire much of the necessary land.

Eminent domain has long been recognized as a power belonging to any sovereign government. In the US Constitution, this power is implicit in the wording of the Fifth Amendment, which says, “nor shall private property be taken for public use, without just compensation.”

“‘Just compensation’ has long been interpreted as market value, which is inherently problematic,” explains Howard Mansfield, whose new book, "The Habit of Turning the World Upside Down," takes readers to places where differing American ideas about property ownership have collided, with mixed and sometimes tragic results.

To many people, land is worth far more than its market value, Mansfield points out. It is a beloved place and a home. Claims of eminent domain “pit a quality, a feeling, a way of life against something that's quantified,” he says. “The other problem with eminent domain is that the party taking the property ends up setting the price, even if you appeal, and that's basically a broken market.”

Historically, and particularly in the 19th century, Mansfield says, individuals bore the burden of the government’s goal of broad economic improvement. This was expected and arose from “a definite belief in economic progress that everybody shared,” he notes. A legal textbook from 1895 is quite clear on this subject. It reads, "The quiet citizen must keep out of the way of the exuberantly active one."

“In other words, the burden of proof is on you, the quiet citizen, to explain why your pursuit of happiness should stop property in motion,” Mansfield says.

As a good sample case, Mansfield relates the following story: In the 1890s, a big railroad is coming through a town. In order to build it, the company destroys a farmer’s land. “The farmer goes to court, where the judge tells him, ‘Too bad. You're going to benefit from the overall economic well-being as it improves the town,’” Mansfield explains.

“Essentially, that man is now stuck subsidizing this project,” Mansfield says. “He’s been assigned risk and expense that he didn't choose. So, there's a great injustice there.”

For Indigenous populations, not only was there no legal recourse but federal and state governments acted as if these people literally did not exist, Mansfield notes. Old maps were all about boundaries and not about what or who occupied the land inside these boundaries. According to these maps, tribes who lived in areas claimed by the government to make way for railroads, for example, had no fixed boundaries and, therefore, no property rights.

Often, to these tribes, the land was holy space. The land taken by the US in the Gadsden purchase of 1853-1854, for example, contained the sacred peak of the Tohono O’odham people.

But often, to these tribes, the land was holy space, Mansfield says. The land taken by the US in the Gadsden purchase of 1853-1854, for example, contained the sacred peak of the Tohono O’odham people.

“So, you have two different views of land,” he explains. “It’s somebody's land deal and it's somebody’s holy land. And there's that clash.”

Today, citizens are not quite so powerless. While battles against eminent domain can be fierce and exhausting, they can also be won, Mansfield says. He points to the recent victory of New England residents over Kinder Morgan, America’s largest infrastructure company, who wanted to build a new gas pipeline through the region.

“The [people] were dogged,” Mansfield says. “They immediately learned the process, what rights they had and what rights were lacking. They contacted every possible representative; they learned the energy issues way deep; they sat up late at night learning all about the needs for natural gas … They were actually model citizens when you look at it, and they fought tooth and nail. They showed up, they testified and then they showed up and testified again. They spoke truth to power. And they won.”