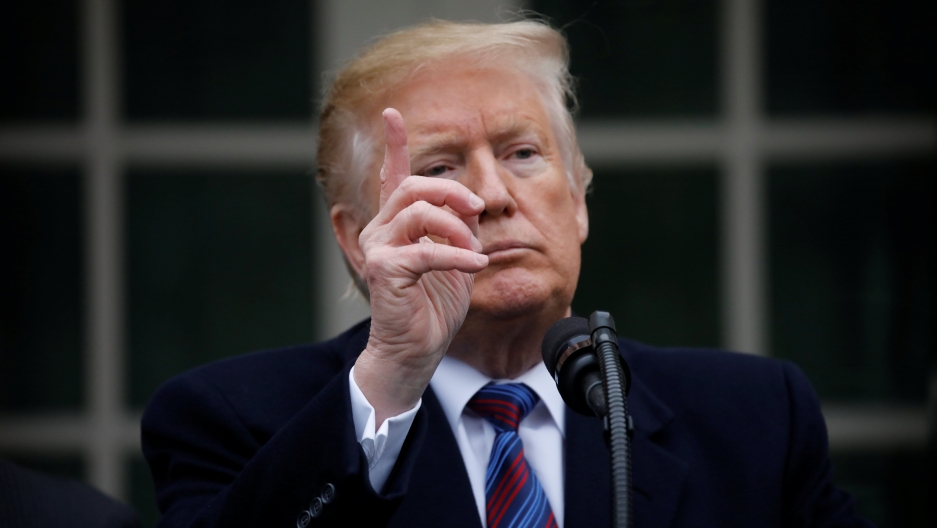 US President Donald Trump speaks to reporters in the Rose Garden after a meeting with US Congressional leaders about the government shutdown and border security at the White House in Washington, DC, Jan. 4, 2019.

President Donald Trump will address the country on Tuesday night about what he says is a "crisis" at the US-Mexico border. The president has even raised the prospect of declaring an emergency and demand the military to build the wall.

US law does allow for emergency presidential powers, but as Elizabeth Goitein says, invoking them is not a step to be taken lightly.

Goitein co-directs the Liberty and National Security Program at New York University's Brennan Center and recently wrote a piece for The Atlantic. Host Marco Werman spoke with her on Tuesday, ahead of President Donald Trump's State of the Union address.

What is the difference between a national emergency and a state of emergency?

We've heard of states of emergency when there are disasters like hurricanes or tornadoes, deep snow falls and ice. This doesn't seem to be one of those. I mean, does it make sense to you?

Well, there have also been states of emergency around terrorist attacks. For example, 9/11 certainly generated a state of emergency. You know, emergencies come in all different forms and shapes and all different kinds of things can cause an emergency. But this is not one of them. I mean there's absolutely no evidence or any reason to consider this a crisis in the way that is supposed to be used as a legal matter. The point of emergency powers is to give the president needed flexibility when there is an urgent, unforeseen disaster of some kind that Congress can't handle quickly enough. And that's clearly not the situation we're in here. So, it's a massive abuse of authority for the president to declare a national emergency in this instance.

How much extra power does the president get and for how long?

He gets powers that Congress has granted him, a number of different statutes. But it's important to remember that these powers are specific. They're not unlimited. The president just doesn't get to do whatever he wants just because there's a state of emergency. And so really the question here is: are there specific statutes that would allow the president to do what he wants to here — which is to build the wall — during a national emergency? There are a couple of laws that have been floated and that certainly the president's team is looking at very closely. But in my view, neither of those laws are a perfect fit. So, there would certainly be legal challenges if the president were to rely on them and it would be a real fight in the courts.

What checks and balances does the US have on emergency powers in the White House?

Not enough. The actual discretion to declare an emergency is almost unlimited. I mean, Congress has not set any limits. Congress hasn't provided any definition of national emergency or required the president to make any showing. He can really just sign his name to a piece of paper. At that point, the president needs to report to Congress every six months on the money he's spending under the emergency. And probably most important: Congress is supposed to meet every six months, while an emergency is in effect, to consider a vote on whether to terminate the emergency. And that was written into the 1976 law. But even though that law has been in place for 40 years, there have been states of emergency in effect during every one of those 40 years. [And] Congress has never voted on whether to end a state of emergency. So that part of the law, that check, the important check that was put in there has just been entirely ignored.

If there isn't an adequate enough check on the president, could someone take this to court? And who would that be?

Yeah, definitely there could and there would be legal challenges brought in court. And they would probably be brought by people who are directly affected by the construction of the wall and those are going to be people who live along the border, maybe officials in border towns whose economies might be affected or farmers whose lands might be affected. Those people would have standing to bring a lawsuit. There absolutely will be legal challenges and so this is not an easy path for the president to take by any means. It's not like he can snap his fingers, say "there's an emergency" and get it done.

Elizabeth, do you know if this has happened before, where there was a prospect of a president to declare a national emergency, and most everyone's like, "What emergency?"

That's a really good question. There are emergencies that are declared almost every year, sometimes more than once a year — under something called the International Emergency Economic Powers Act —that most Americans don't even know are happening. And so, it's not a situation where Americans are saying "what emergency," because they don't really even know that these emergency declarations go into effect. I think if there were more sort of public attention to that, I think he would have a lot of Americans saying, "wait a minute."

That's happened a little bit, I guess when President Obama declared a national emergency around Venezuela in order to impose sanctions against officials in Venezuela. That generated a brief panic as people said, "Well, wait a minute" or "Are we under threat from Venezuela?" And the president actually had to say, "No, no, no we don't really have any kind of national security threat coming from Venezuela." That's just what I had to say under the law in order to trigger these emergency powers. So that was sort of a surprisingly frank admission that these powers are sometimes used to just achieve ordinary policy goals.

On a scale of 1 to 10, how scared are you that President Trump will abuse emergency powers if he does invoke a state of emergency?

I'd say probably about a nine. And then there's the question of what that abuse looks like and how severe it is. You know, there are sort of petty abuses that have happened before. I mean, President Trump relied on the 9/11 state of emergency back in 2017 to fill a chronic shortage in Air Force pilots. That was an abuse of the 9/11 state of emergency. But it wasn't an abuse that anyone noticed or that had a dramatic impact on anyone's lives. So, I think it's almost a certainty that we would see misuses, abuses of emergency powers.

My concern is that it could be the kinds of abuses that really could undermine our democracy.

Just out of curiosity, is the 9/11 state of emergency still active today?

Absolutely. It's been renewed every year by every president and Congress has shown no interest, at least until now, in acting to try to end that state of emergency. And there's no incentive for any president to actually terminate it because it provides the president with tremendous flexibility in how he uses the military.