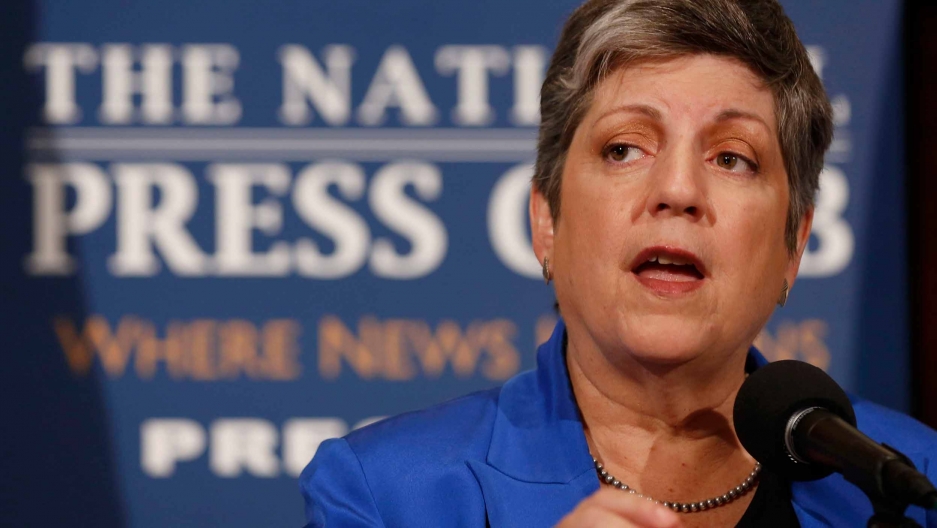 Former US Secretary of Homeland Security Janet Napolitano gives her final official speech at the National Press Club in Washington on August 27, 2013.

Former Homeland Security Secretary Janet Napolitano started her career in law enforcement and sent human traffickers and cross-border drug smugglers to jail. She also served as the governor of Arizona from 2003 to 2009. Although she's in favor of adding a few new barriers in strategic locations on the US-Mexico border, Napolitano says building a wall from "sea to shining sea" would be wasteful.

Napolitano, who led the department under former President Barack Obama, has a book coming out next month called, "How Safe Are We? Homeland Security Since 9/11."

The World: Do you appreciate the White House taking this focus on issues at the border with Trump's visit?

Janet Napolitano: That trip is what I would term a photo op. It's not a real opportunity for a serious discussion about border security. As a former governor of a border state, as a former Secretary of Homeland Security, I know that border very, very well, and it needs to be managed and it needs to be controlled. But it's certainly not in a crisis situation.

When you were governor of Arizona you and a bipartisan group of lawmakers backed the construction of a physical barrier near Yuma, Arizona. The White House has pointed to it as a success story. Was it a success?

Yes. And there has been roughly 700 miles of fencing constructed along the portions of the border, where it made sense, where it would help direct traffic so that illegal traffic was easier to observe and be intercepted where it was near an urban area to prevent illegal crossings there.

But having some places where you have strategically placed fencing or another type of barrier is very different than saying you're going to build a 1,954-mile long barrier across the entire border. That doesn't make strategic sense.

So the wall made sense when you built it near Yuma. What doesn't make sense is to just simply say build a great wall from sea to shining sea. That, to me, is wasteful and ineffective.

Do you think Democrats in the White House should cut a deal that includes some physical barriers?

No. And Congress, even when it was under the control of the Republicans, didn't pass funding for the wall.

What should happen is the president should re-engage with the Congress on what is truly needed for border security strategy. And in the meantime, they ought to reopen all the elements of the government that are currently shut down.

Where does border security fit into the larger idea of immigration reform? We need both, but which comes first?

In an ideal world, you would take both up together. Border security and funding for it would be part of a comprehensive immigration reform bill. That is what the Senate, in a bipartisan way, did in 2013. And that bill provided for more funding for border security. It provided a pathway for those who were in the country illegally to get right with the law and to normalize their status in-country. And it had a number of provisions in it to reform the visa system that we have. Those are really the three pillars of an integrated comprehensive strategy.

Right now, it seems as if border security has been broken apart from that. And that has become the crux of this federal government shutdown, which, I’ve got to say, is ridiculous.

Related: In Texas border town, skepticism ahead of Trump visit to push wall

We're hearing so many mixed messages from people who work along the border. I went on a ride along a couple of years ago with two Border Patrolmen and they said a wall is not needed, more personnel are. I also hear from others in CBP that they would like a wall. Do you think the people in the trenches want a wall?

No. I think many people in the trenches want to support the president, and I respect that. I personally disagree with it.

You believe a wall is not needed, and that's what you're hearing from people and CBP. I'm also hearing from other Border Patrol people that if money and resources were reassigned to more officers and if a wall were there they could do that and they'd be freer to patrol upland 20-50 miles into the desert. Doesn’t that make sense?

I’ve heard that argument. There's already 700 miles of fencing along the border and it may make sense to add a few sections more in strategically located areas.

It would be expensive. It would take a long time to build, and it would be a real actual distraction from a border security plan that makes sense.

Related: President Trump, will Native American sovereignty make a difference when you decide to build a wall or not?

You were the first Democrat to be reelected as Arizona's governor in what was once a solidly red state. You may see ways to find a path through this current impasse. What do you think others with a different mindset are missing?

This president ought to start talking about border security, and not a wall.

And he ought to expand his thinking to include the things that have been included in CBP strategies for protecting the border. Things like extra manpower things like more technology. It's things like air cover along the border and he ought to say, “You know what? We're going to disagree on the wall. I'm still going to ask for it. It's still good to be in my presidential budget. But these are other things that make sense that I think we can agree on. So let's keep some funding for that. And I'm going to continue to fight for the wall, you're going to continue to say no, but we're going to see if over time I can persuade you that I'm right about.”