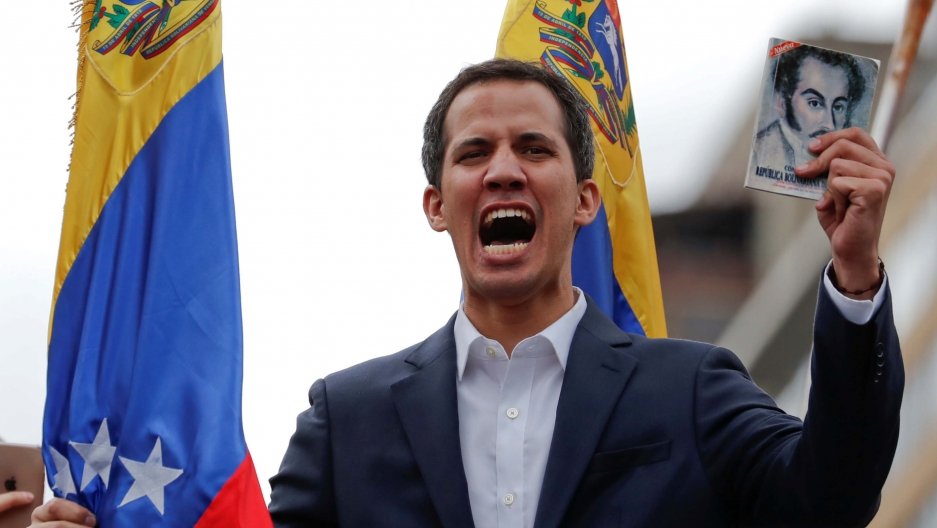 Juan Guaidó, President of Venezuela's National Assembly, holds a copy of Venezuelan constitution during a rally against Venezuelan President Nicolas Maduro's government and to commemorate the 61st anniversary of the end of the dictatorship of Marcos Perez Jimenez in Caracas, Venezuela, Jan. 23, 2019.

Venezuela's opposition on Thursday will seek to maintain pressure on isolated President Nicolás Maduro after congress chief Juan Guaidó swore himself in as interim head of state with the support of nations around the region.

Guaidó won diplomatic backing from the United States, Canada and right-leaning Latin American governments on Wednesday after declaring himself leader before ebullient supporters who thronged the streets of Caracas in hopes of change.

The European Union stopped short of recognizing Guaidó as leader but said the democratic will of Venezuelans "cannot be ignored" and called for his "civil rights, freedom and safety" to be respected. 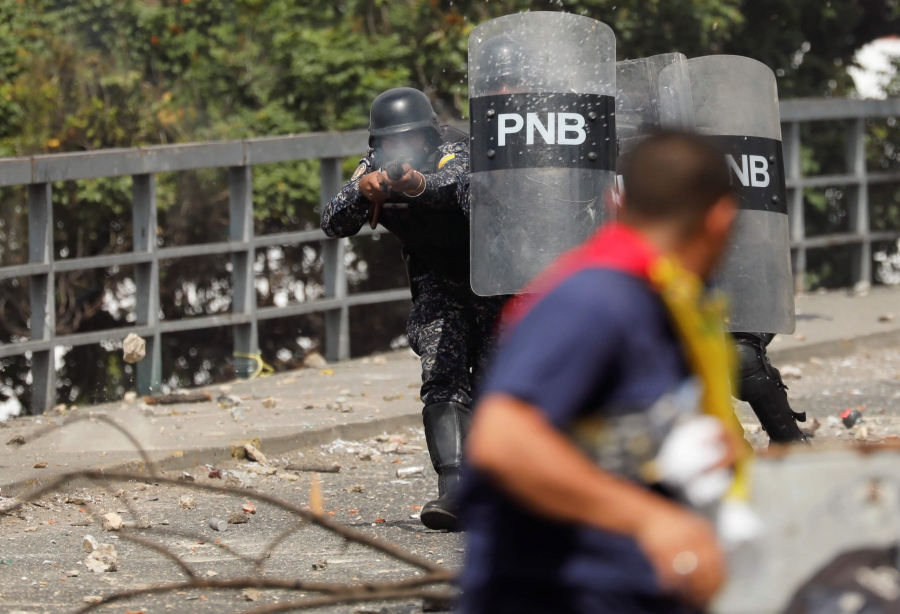 Guaidó , 35, an industrial engineer catapulted almost overnight to national leader, has promised free and fair elections, a transition government to revive the hyperinflation-riddled economy and an amnesty for military officers if they help push Maduro from power.

He faces the daunting task of pushing forward the transition plan without control over crucial state institutions and armed forces that have disavowed him.

Military commanders, including Defense Minister Vladimir Padrino, have so far promised to stick with socialist Maduro. Padrino was scheduled to speak on Thursday in support of Maduro, hours after he said the armed forces would not recognize a president "imposed by shadowy interests."

On Thursday morning, Venezuelan state television broadcast four separate messages from regional military commanders, surrounded by troops, voicing support for Maduro. The recorded messages were broadcast one after the other.

Russia, which has invested heavily in Venezuela's oil industry and provided support to its armed forces, accused Washington of trying to usurp power in the country and warned against US military intervention.

Related: Venezuelans want President Maduro out, but most would oppose foreign military intervention to remove him

Kremlin spokesman Dmitry Peskov said Russia had not received a Venezuelan request for military help and declined to say how it would respond if it did. But he said Maduro was the legitimate president.

Among investors holding defaulted debt issued by the government and state-run oil company PDVSA, the political developments fueled hopes that a resolution of the crisis might be coming closer. 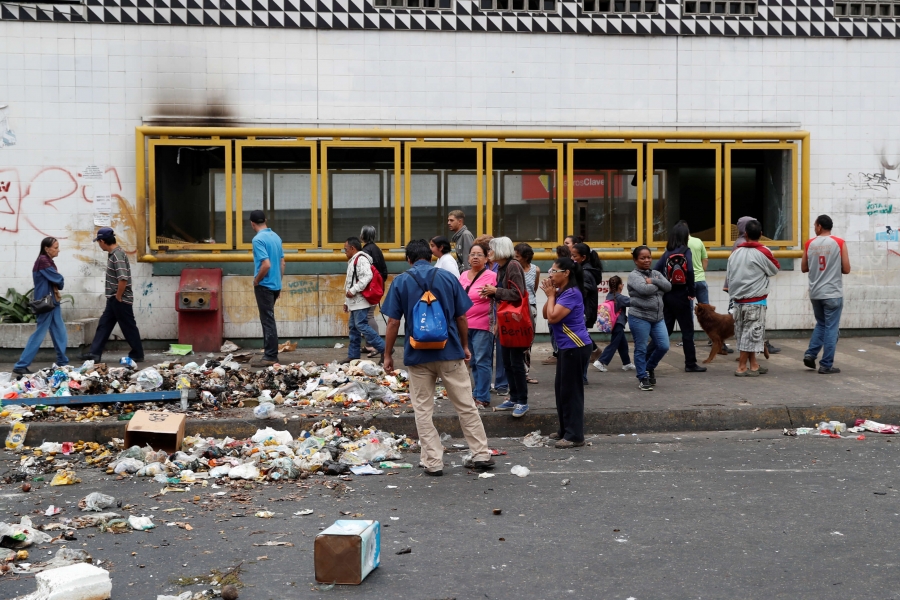 People look at damage at a metro station after a protest in Caracas, Venezuela, Jan. 24, 2019.

Sovereign dollar and PDVSA bonds extended their rally on Thursday, having surged the previous day after Washington backed Guaidó . Its 2024 sovereign dollar bond is now at its highest since autumn 2017 when Maduro publicly called for a debt restructuring.

A total of 14 people were killed in violence linked to anti-government protests on Tuesday and Wednesday, according to local rights groups Provea and the Venezuelan Observatory of Social Conflict. Some of the deaths resulted from looting.

Many opposition sympathizers are concerned Guaidó could be arrested like other political activists, including his mentor Leopoldo Lopez, who remains under house arrest for his involvement in street protests in 2014.

"While it's true that Guaidó has been recognized internationally, the real power of the state is still in the hands of Nicolás Maduro," said Ronal Rodriguez, a political science professor who focuses on Venezuela at Rosario University in Bogota. 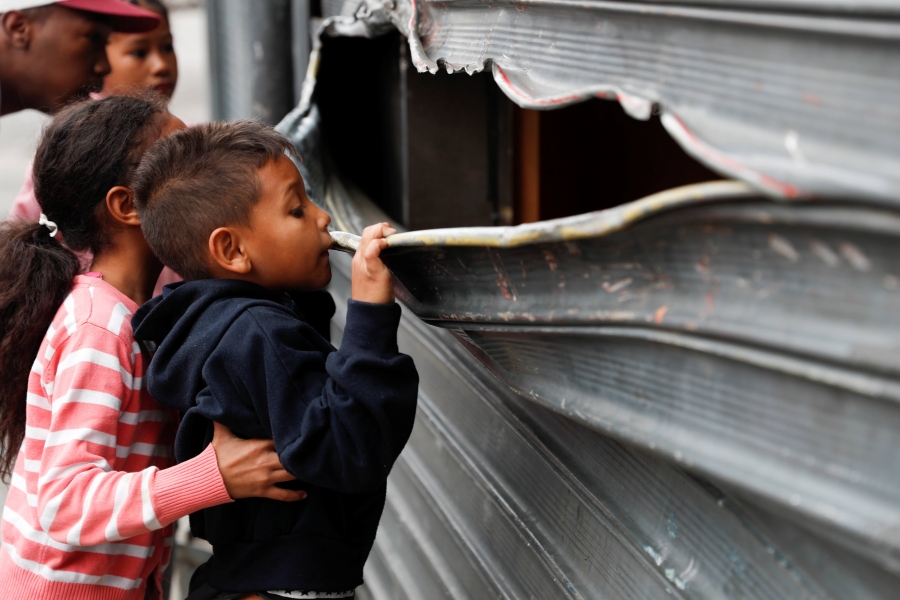 People look at the damage at a Bank of Venezuela branch after it was looted in Caracas, Venezuela, Jan. 24, 2019.

With the country's economy disintegrating and annual inflation approaching 2 million percent, Maduro has relied extensively on the military to maintain power.

Foreign backing could allow Guaidó to raise funds abroad to obtain food and medicine for a population struggling under economic crisis, Rodriguez said, but he would face challenges in getting goods through ports controlled by Maduro allies.

Guaidó on Wednesday promised that humanitarian aid would be distributed with the oversight of congress. He did not announce activities for the coming days.

Referring to Wednesday's anti-government protests, the EU said Venezuela's people had "massively called for democracy and the possibility to freely determine their own destiny. These voices cannot be ignored. 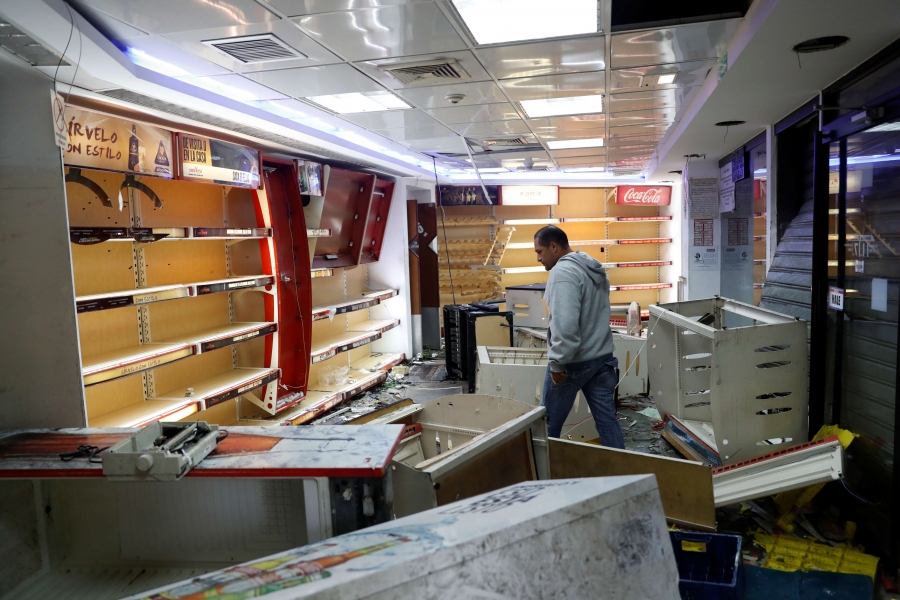 Damage is seen in a Venezuelan bank branch after it was looted in Caracas, Venezuela, Jan. 24, 2019.

"The Venezuelan people have the right to peacefully demonstrate, to freely choose its leaders and decide its future," the 28-nation bloc said in a statement.

The EU has imposed sanctions on Venezuela and boycotted Maduro's swearing-in for a second term this month following a widely-boycotted election last year that many foreign governments called a sham.

It aims to set up an international contact group with South American nations in February to seek talks between Maduro and the opposition, which diplomats said would need to include Guaidó.

European Council President Donald Tusk, who coordinates EU governments from Brussels, took to Twitter to call on "all of Europe to unite in support of democratic forces" in Venezuela. 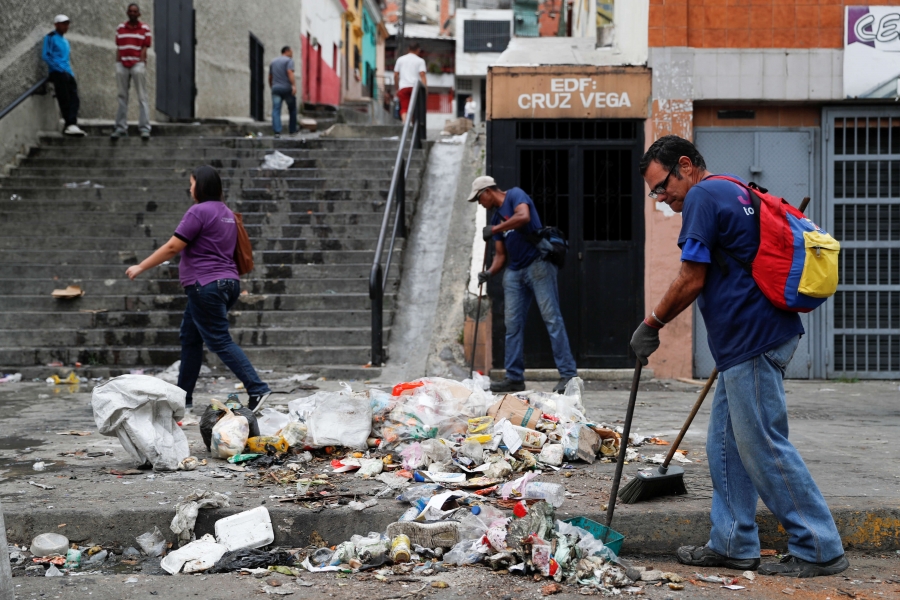 Workers clean the street after a protest in Caracas, Venezuela, Jan. 24, 2019.