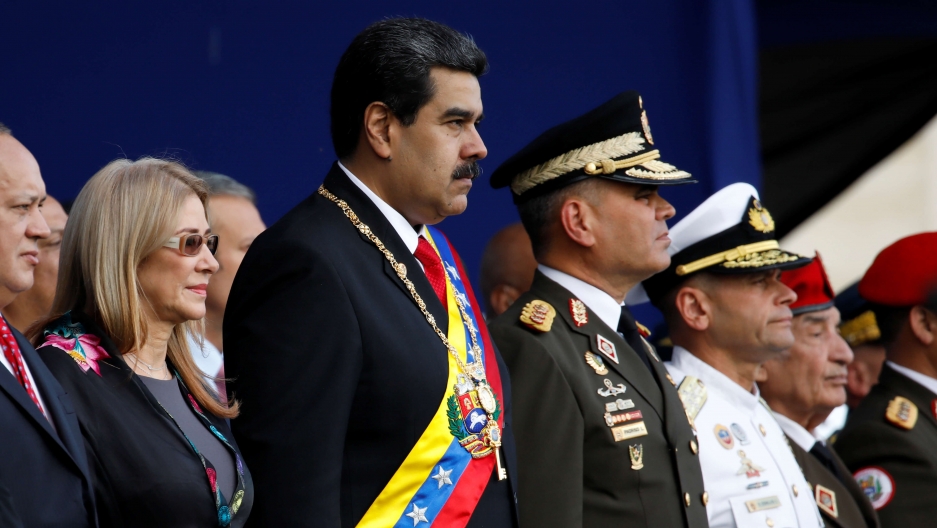 Venezuelan President Nicolas Maduro attends a ceremony, after his swearing-in for a second presidential term, at Fuerte Tiuna military base in Caracas, Venezuela Jan. 10, 2019.

Venezuelan president Nicolás Maduro, who has led his country into one of the world’s worst economic crises, was sworn in for a new six-year term on Jan. 10.

His inauguration at the Supreme Court was a lonely one: Some 40 countries — including the United States, Brazil, Colombia and the entire European Union — are refusing to recognize Maduro’s government because they believe his May 2018 re-election was rigged.

How else could a leader with a 21 percent approval rating win 68 percent of the vote?

Oil producer Venezuela, once among Latin America’s more prosperous nations, has seen severe food and medicine shortages since 2014. Thousands of people flee dire conditions in the country every day.

There are three ways that citizens can democratically demand change from poorly performing leaders: vote them out of office, protest for them to change course or resign, or make demands through face-to-face dialogue.

Venezuelans have tried all three.

The last free elections in Venezuela were held in December 2015. Opposition parties won the Venezuelan legislature in a landslide, securing a super-majority that gave them unprecedented strength to check Maduro.

His ruling United Socialist Party responded by progressively stripping the legislature of its powers and ensuring the Socialists would not lose another election.

When Maduro stood for re-election in 2018, Socialist Party officials disqualified leading opposition politicians and parties from running and forced the vote seven months early to prevent them from reorganizing.

Many Venezuelans fought for their democracy.

From April to July 2017, hundreds of thousands of demonstrators took to the streets nationwide, mostly in peaceful protest. Marchers in Caracas who neared the presidential palace or government ministries were met by police and soldiers in riot gear who scattered them using tear gas, water cannons and, often, live ammunition.

At least 124 people were killed during Venezuela’s 2017 protests. Another 4,000 were injured and 5,000 were arrested, according to the Inter-American Human Rights Council. Dozens, perhaps hundreds, were tortured.

Amid all of this, Venezuela’s opposition also tried talking with Maduro’s government.

But dialogues in 2014, 2016 and 2018 — including one mediated by the Vatican — achieved little. Arguably, the talks weakened the opposition-led protest movement by giving the appearance of government concessions.

In August 2017, shortly after the US slapped economic sanctions on President Maduro himself, President Donald Trump said that the United States was considering a “military option” in Venezuela.

“Venezuela is not very far away and the people are suffering, and they are dying,” Trump said. “We have many options for Venezuela, including a possible military option if necessary.”

Administration officials even met with Venezuelan military officials plotting a coup before declining to support their plan.

But some exiled Venezuela leaders have embraced the idea.

“Military intervention by a coalition of regional forces may be the only way to end a man-made famine threatening millions of lives,” the former Venezuelan minister and Harvard professor Ricardo Hausmann wrote in a January 2018 Project Syndicate column.

Hausmann pointed to the 1989 US invasion of Panama and World War II as positive precedents of foreign interventions that ended tyrannical regimes.

Former Caracas mayor Antonio Ledezma has used euphemistic language to justify a foreign-backed removal of Maduro, saying it would be a “humanitarian intervention.”

Comparing the crisis there to the Rwandan genocide of the 1990s, Secretary General of the Organization of American States Luis Almagro has suggested that military intervention could be justified under international law, which includes the “responsibility to protect.”

In the view of “military option” supporters, Venezuelans would welcome such an operation if it ended their suffering.

Intervention would be “extremely popular” in Venezuela, according to Diego Arria, a former Venezuelan ambassador to the United Nations and a prominent Maduro critic.

My research in Venezuela suggests otherwise.

All credible polling in Venezuela says that most Venezuelans desperately want Maduro out. But that does not necessarily mean they are open to desperate measures.

In November 2018, I worked with Datanálisis, one of Venezuela’s most respected polling companies, to add several questions about about military intervention and potential negotiations to its nationwide tracking poll.

When asked whether they would support “a foreign military intervention to remove President Maduro from his position,” only 35 percent said yes — hardly the warm welcome predicted by advocates. More than half — 54 percent — would reject such an operation.

Venezuelans are also skeptical of renewed talks with Maduro.

Only 37 percent would “agree with a new dialogue between the government and the opposition.” Forty percent are “indifferent” to renewed talks or did not answer the question.

So what do Venezuelans want?

Given how poorly past engagement with Maduro’s government has gone, their doubts are understandable.

Interest in further talks balloons, however, if the same question is reframed to include a positive result.

When respondents were asked about “a negotiated settlement to remove President Maduro from power,” 63 percent said they would support it. That makes negotiations by far the most popular option for restoring democracy in Venezuela, according to this data.

These results should boost current efforts by the European Union and the Boston Group — a coalition of Venezuelan and American politicians — to restore high-level contact between Venezuelan government figures, opposition leaders and foreign officials.

Diplomacy may be slow and frustrating. But a negotiated settlement would have the support of the people who matter most: the Venezuelans who must survive Maduro’s rule.