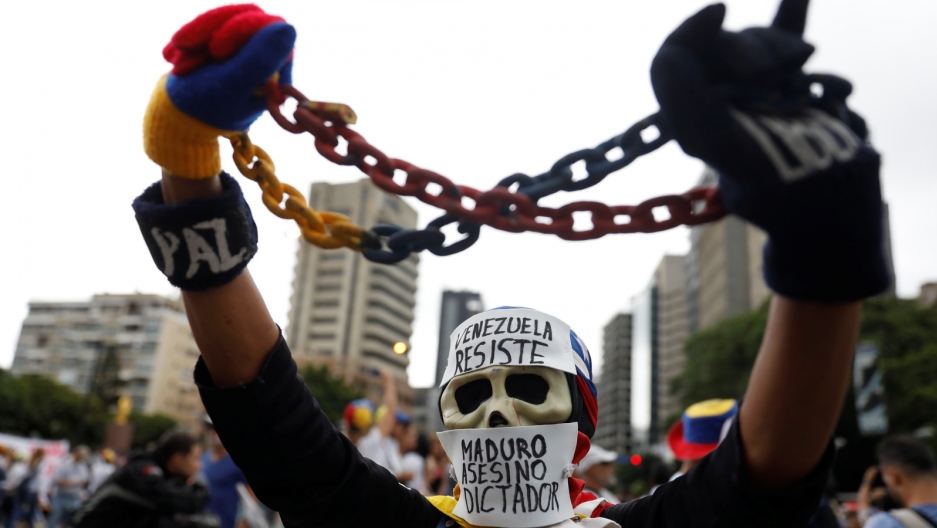 United States President Donald Trump has spoken forcefully about the humanitarian crisis in Venezuela, calling it a “human tragedy” at the United Nations General Assembly in September.

Venezuela’s humanitarian crisis — which began in late 2014 when a drop in oil prices deprived the government of its primary income source — has worsened to previously unimaginable levels. People are now dying from shortages of food and medicine.

Noting that 2 million Venezuelan refugees have escaped “the anguish inflicted by the socialist Maduro regime,” Trump asked world leaders to join forces and “seek the restoration of democracy in Venezuela.”

This sounds like strong support for my ailing native country. My academic research on political rhetoric, however, has taught me that politicians’ words often deceive.

Close analysis of Trump’s Venezuela policy shows that his administration is doing much less than it could to ease Venezuelans’ suffering. But that hasn’t stopped the president from using the country’s crisis for Republicans’ political gain ahead of November’s midterm elections.

Venezuela was once Latin America’s richest nation. Now inflation may reach 1 million percent and a recent poll found that 30 percent of Venezuelans eat only once a day.

To pressure Venezuelan president Nicolás Maduro to “restore democratic order,” the US in September imposed sanctions on his wife, the country’s defense minister and head of its Constituent Assembly, an all-powerful body created in 2017 to supersede the opposition-led legislature.

This is the fourth round of sanctions on Venezuelan leadership since Trump took office in 2017. 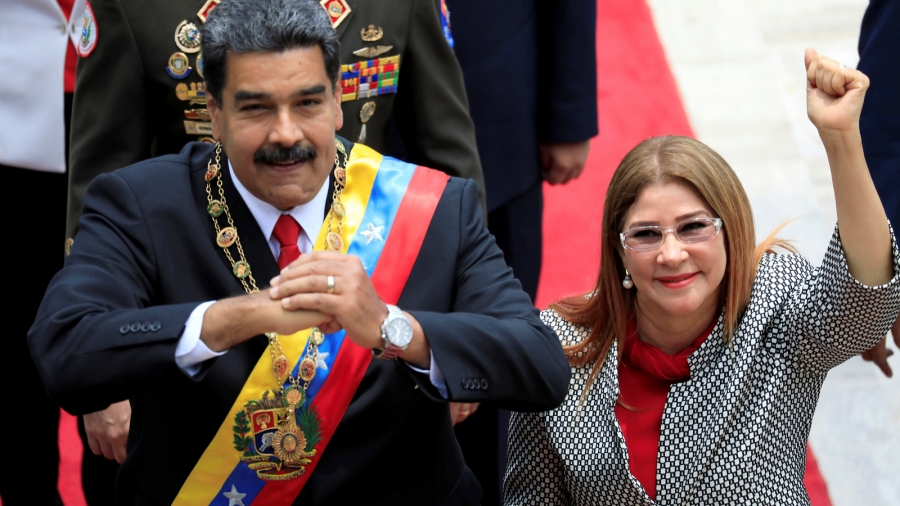 Venezuela's President Nicolás Maduro and his wife Cilia Flores gesture during arrival for a special session of the National Constituent Assembly to take oath as re-elected President at the Palacio Federal Legislativo in Caracas, Venezuela, May 24, 2018.

As conditions in Venezuela worsen, a massive and growing number of people are fleeing to neighboring nations. The United Nations High Commissioner for Refugees estimates that 5,000 people leave every day.

The Venezuelan exodus “is on the scale of Syria,” said Matthew Raynolds, of the UN refugee agency.

The influx of migrants is straining resources in Brazil and Colombia, where border cities have seen flare-ups of xenophobia and violent attacks on refugees.

The US says it will allocate an additional $48 million in humanitarian aid to fund US agencies that are providing disaster and food relief to Venezuelan migrants in Latin America.

Combined with the $46.8 million already earmarked as humanitarian aid for Venezuelan refugees this fiscal year, US foreign aid for the South American nation totals $94.8 million — up from $14 million in 2017.

But even with that big boost, foreign assistance for Venezuela is just a fraction of the $475 million given last year to Colombia and only slightly higher than the Latin American regional average of $62 million in annual aid. 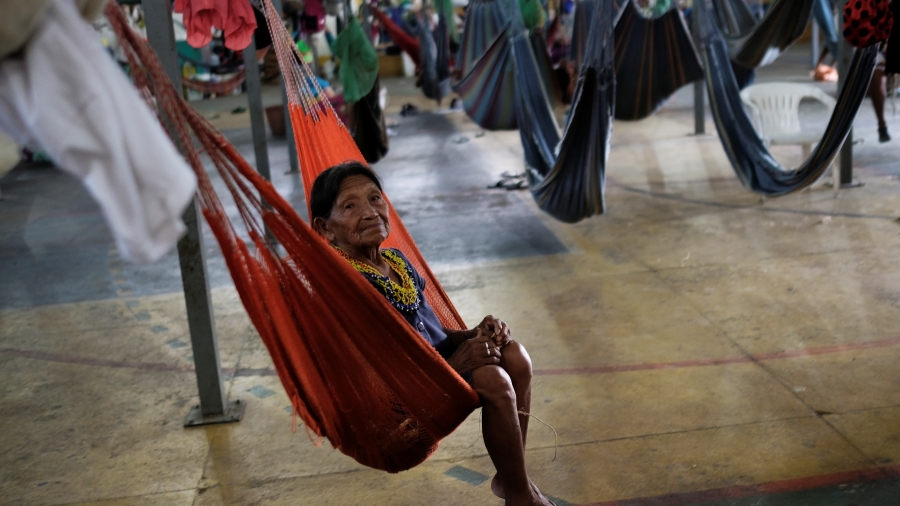 An indigenous Warao woman from the Orinoco Delta in eastern Venezuela is pictured on a hammock at a shelter in Boa Vista, Roraima state, Brazil, Aug. 11, 2018.

Despite Trump’s statements of sympathy for Venezuelan refugees, they are not exempt from his administration’s immigration crackdown.

And though Vice President Pence recognized that “violence and tyranny” rule the country, Venezuelans are routinely denied political asylum. Over the past five years, immigration judges have denied nearly 50 percent of all Venezuelan asylum applications.

Venezuelans now represent the biggest group of asylum-seekers in the US, surpassing Central Americans in 2016. Last year, Venezuelan refugees filed 27,629 asylum claims, more than 10 times the 2,181 petitions made in 2014.

Immigration attorneys in Miami say the US Consulate there has also been revoking tourist visas from Venezuelans, and the federal government has drastically reduced the number of non-immigrant visas issued to Venezuelans, from 239,772 in 2015 to 47,942 last year.

In Florida, home to the largest Venezuelan community in the US, politicians from both parties — including Senators Bill Nelson and Marco Rubio — say they would support giving Temporary Protective Status to Venezuelans that would allow migrants to remain legally in the US until Venezuela stabilizes.

Previous administrations have granted TPS to Nicaraguans, Hondurans and Sudanese during similar times of crisis.

But the Trump administration, which is in a court fight over its termination of TPS for most immigrant groups, says Venezuelans do not qualify for protected status.

Administration officials met secretly with dissidents from Venezuela’s armed forces over the last year to discuss plans to overthrow Maduro, according to a New York Times story.

Ultimately, the US declined to participate in a coup. But Maduro’s regime “could be toppled very quickly by the military,” Trump has said, evidently referring to the Venezuelan armed forces.

Navy Vice Adm. Craig Faller, nominated to lead the US military’s Southern Command, recently told a Senate panel that he was unaware of any plan for military action in Venezuela.

“We are not doing anything other than normal prudent planning … to prepare for a range of contingencies,” he said.

Eleven nations in the region, including refugee-saturated Brazil and Colombia, recently agreed to accept more Venezuelans, including those whose documents have expired. Many Venezuelans cannot obtain a passport or renew their national identity cards because of the Maduro regime’s slow, dysfunctional and corrupt bureaucracy.

‘They want to turn America into Venezuela!’

The White House’s failure to act on Venezuela has not stopped Trump from using its crisis for electoral gain in November’s midterm elections.

“The new Democrats are radical socialists who want to model America’s economy after Venezuela,” Trump wrote in an Oct. 10 USA Today op-ed.

And at an event in Tennessee earlier this month, Trump insisted that Democrats “want to shut down American energy and replace freedom with socialism.”

They “want to turn America into Venezuela!” he yelled.

Bellicose rhetoric against Maduro’s regime coupled with expressions of compassion for its victims may play well with Trump’s base.

But it will not help those living through the worst humanitarian crisis the Americas have ever seen.

Marco Aponte-Moreno is an assistant professor of global business at St Mary's College of California.