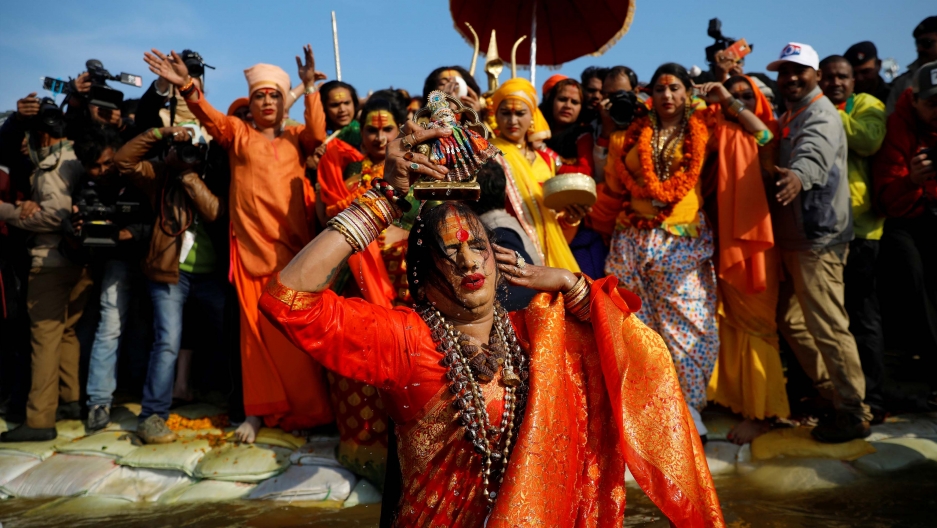 Laxmi Narayan Tripathi, chief of the Kinnar Akhara congregation for transgender people, takes a dip during the first Shahi Snan (grand bath) during Kumbh Mela, or "festival of the pitcher," in Prayagraj, India, on Jan. 15, 2019.

In a desert tent guarded by armed police and a thick-set bouncer, Laxmi Narayan Tripathi is blessing a constant stream of pilgrims, who garland her with marigolds and kneel to touch her feet.

Tripathi, a tattooed transgender leader and a former reality TV star, has become an unlikely icon at India's Kumbh Mela, a huge religious festival being held on the banks of the Ganges river in the city of Prayagraj. Up to 150 million people are expected to attend by the time the festival ends in March.

On Tuesday, her religious movement, called the Kinnar Akhada, became the first transgender group to bathe at the confluence of the holy Ganges and the Yamuna rivers on the first day of the ancient festival, traditionally reserved for reclusive Hindu priests, almost all of whom are men.

"After centuries down the line, it was when the community finally got its due," Tripathi told Reuters, seated on a pedestal next to her Michael Kors bag, juggling calls on an iPhone.

Many at the festival cheer Tripathi for reclaiming the lost place in Hinduism for India's "third gender," known as the hijras and worshipped as demi-gods for thousands of years, but ridiculed and sidelined during British colonial rule.

A law passed in 1871 classed the hijras as "criminals."

Little changed after independence, and hijras were pariahs, living in tribes, begging or soliciting for sustenance and harassed by police.

It was only in 2014 that the Supreme Court officially recognized transgender people as a third gender. 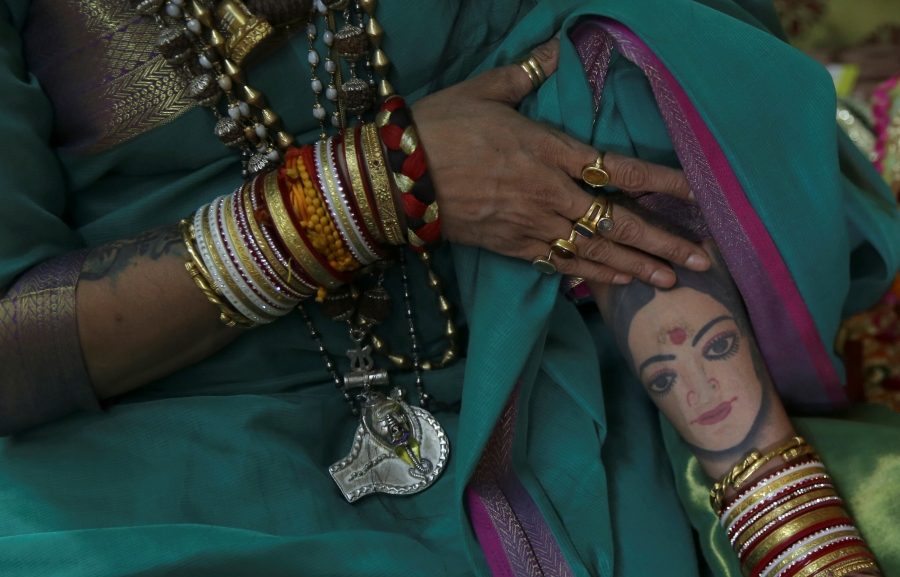 Laxmi Narayan Tripathi, who is one of India's best known transgender activists shows her tattoos during the Kumbh Mela festival Jan. 16, 2019.

Tripathi is one of the best known. But her support for building a controversial Hindu temple on the site of a demolished mosque has angered some in the LGBT community, who allege she is courting support from India's powerful religious right to further her own influence.

The place of hijras in Indian culture dates back to the Ramayana, a more-than 2,000-year-old Hindu epic poem venerated and performed across India.

In the text, the god-king Ram is exiled from the holy city of Ayodhya, with the entire kingdom following him into the forest. He orders them to turn back, but returning after 14 years, finds the hijras waiting for him in the same spot. Impressed by their devotion, he grants them the power to invoke blessings and curses on people.

For centuries, though their lives were far from easy, hijras held a special role in India's royal courts, tasked with guarding harems and rising to influential positions.

Today, despite their legal recognition, many still face prejudice in what is a conservative country, forced into sex work or seeking alms at weddings and births, a long-held practice among hijras. Hate crimes against them are common, and HIV prevalence within the community is many times higher than the general population.

"The ritual seeking of alms is now seen as begging," said Anindya Hajra, a transgender activist at the Pratyay Gender Trust. "It criminalizes and pushes an already vulnerable community to its very brink."

Born in 1979 in Thane, a suburb of India's financial capital Mumbai, Tripathi says she had a difficult childhood scarred with abuse by a close relative. A sickly child who was bullied at school for being feminine, she grew in confidence after learning Bharatanatyam, a classical Indian dance.

"I chose not to remember the prejudice," she said. "Rather I think (about) the good things that have happened to me, and be a flamboyant rainbow."

Long recognized as one of the most influential figures in the LGBT community in India, she become famous across the country when she appeared on reality TV show "Bigg Boss" in 2011. She was a petitioner in the landmark court ruling that recognized transgender people.

In 2015, she founded her Akhara and began a campaign to have hijras represented at the at the first "Shahi Snan," or royal bath, of the Kumbh Mela.

"It all started to reclaim the lost position in the dharma," Tripathi said, referring to the Hindu cosmic law underlying correct behavior and social order. "I was not very religious until 2015 — life changed."

Devout Hindus believe bathing in the waters of the Ganges absolves people of sins and doing so at the time of the Kumbh Mela, or the "festival of the pitcher," brings salvation from the cycle of life and death.

At the festival, 13 religious orders, or Akharas, set up camp on the banks of the Ganges.

The umbrella body overseeing the Akharas initially refused to recognize the Kinnar Akhara as the 14th order.

But Tripathi has forged close bonds with the largest of the other holy orders at the Kumbh Mela, the Juna Akhara. They agreed to bathe together.

On the first royal bathing day on Tuesday, Tripathi rose at 4 a.m., dressed in a saffron sari and applied her makeup. She and her dozens of disciples then began the long procession to the river on a fleet of elaborately decorated trucks.

At the banks of the Ganges, they waited for their turn to bathe. Tripathi met with Hari Giri, the leader of Juna Akhara.

Her Kinnar Akhara "was there, is there, and will always be there", Giri told Tripathi.

Shortly after sunrise, she plunged into the waters, to the cheers of the crowds who gathered to watch. 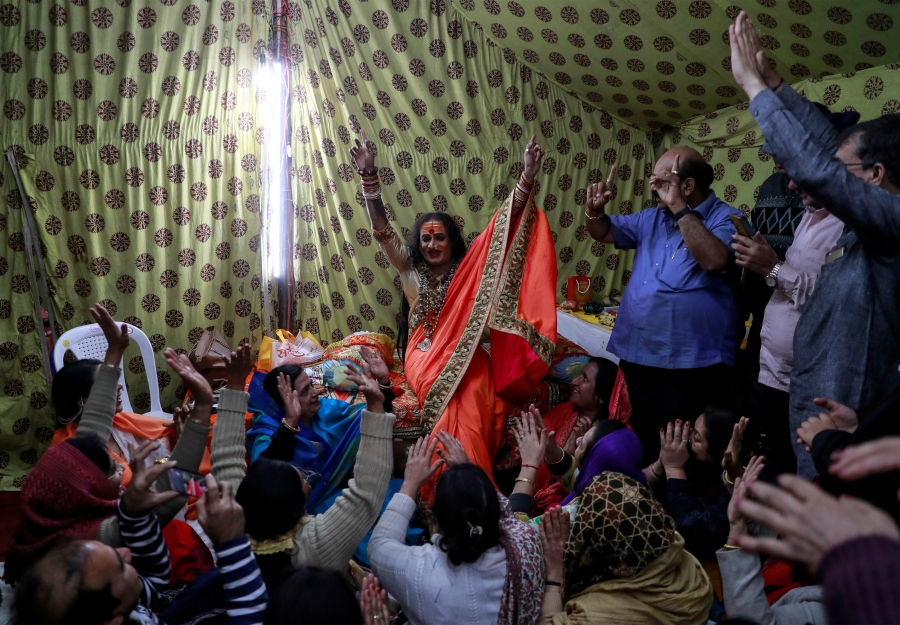 Laxmi Narayan Tripathi sings with her followers during the Kumbh Mela festival Jan. 14, 2019. Tripathi has become a controversial figure, advocating for to rebuild a temple on the site of a former mosque, a move also supported by activists of India's ruling Hindu nationalist Bharatiya Janata Party.

Tripathi has courted controversy with support for the building of a temple dedicated to Ram on the site of a former mosque in Ayodhya, which was demolished by hardline Hindus in 1992, leading to riots in which thousands died.

Many Hindus claim the mosque was built over an ancient temple that marked the birthplace of Ram, and the row is expected to be a major issue in a general election due to be held in the country by May. Many activists of India's ruling Hindu nationalist Bharatiya Janata Party have been agitating for the construction of a temple at the site, alarming the country's sizeable Muslim minority.

"There has been an attempt by the right to co-opt trans voices to suit a certain version of history," said Hajra, the activist. "Our apprehension is also that some are trying to further [their] own personal career moves."

A letter signed in November by hundreds of transgender people and rights groups accused Tripathi of fuelling "the right-wing politics of communal hatred."

"Where my Lord Ram was born, there the temple has to come," she said. The Mughals "brought [the temple] down and then they enslaved us all," she said, referring to the Muslim emperors who ruled India in the 16th and 17th century.

Tripathi plans to spend the rest of the Kumbh festival at her Akhara, receiving visitors among her colorful band of followers, who have little in common with the holy men living monastic lives in the other camps.

"We are not celibate," she said. "We are demi-gods, not saints. We have our own rules."