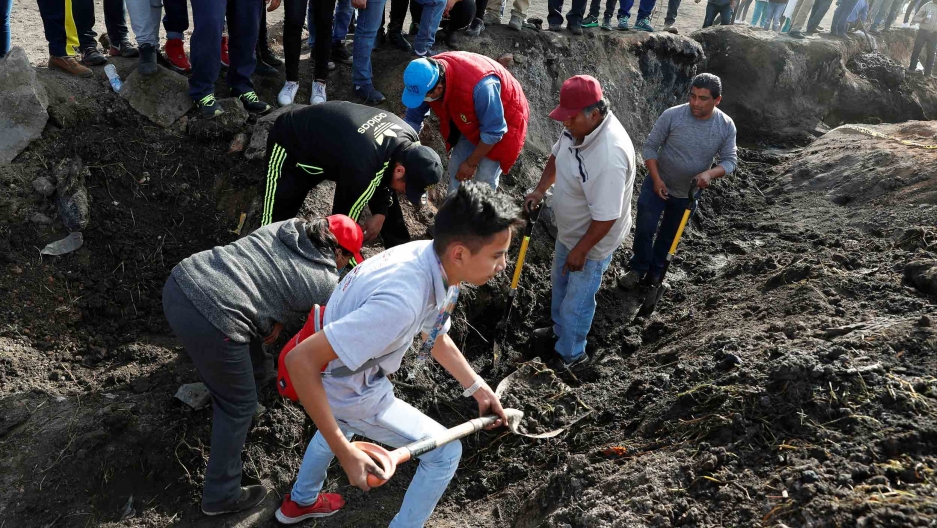 Residents search for human remains and items that could help to identify their missing relatives and friends at the site where a pipeline ruptured by oil thieves exploded, in the municipality of Tlahuelilpan, state of Hidalgo, Mexico on Jan. 20, 2019.

Nearly a month after Mexico's new president launched an ambitious plan to stamp out growing fuel theft, the strategy meant to crush corruption and organized crime is under heightened scrutiny.

On Friday, at least 89 people died from a powerful explosion at a gasoline pipeline in central Mexico that had been punctured by fuel thieves. Relatives of some of the victims said fuel shortages stemming from the government's crackdown led people to risk their lives filling plastic containers from the leak.

President Andres Manuel López Obrador, who took office in December, said the tragedy has not weakened his faith in the plan. Since late December, he has closed six major pipelines where criminal gangs and other thieves have siphoned off stolen fuel worth billions of dollars. 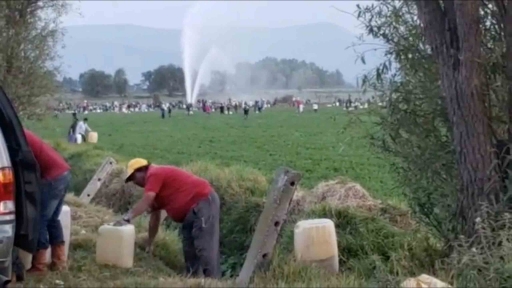 People gather at the site of a ruptured pipeline in the municipality of Tlahuelilpan, in Hidalgo, Mexico, on Jan. 18, 2019 in this still image taken from a video obtained from social media. In the hours before the pipeline exploded, gas gushed from the pipleine and people came to fill plastic gas containers from the leak. At least 89 were killed and 51 injured in the blast.

López Obrador is moving distribution to trucks, but that switch has caused delivery delays and long lines at gas stations, threatening to crimp the economy and hurt his popularity if shortages persist.

Since Friday's explosion, funerals for those who could be identified have began, while relatives have begun searching through the remains of the explosion themselves. 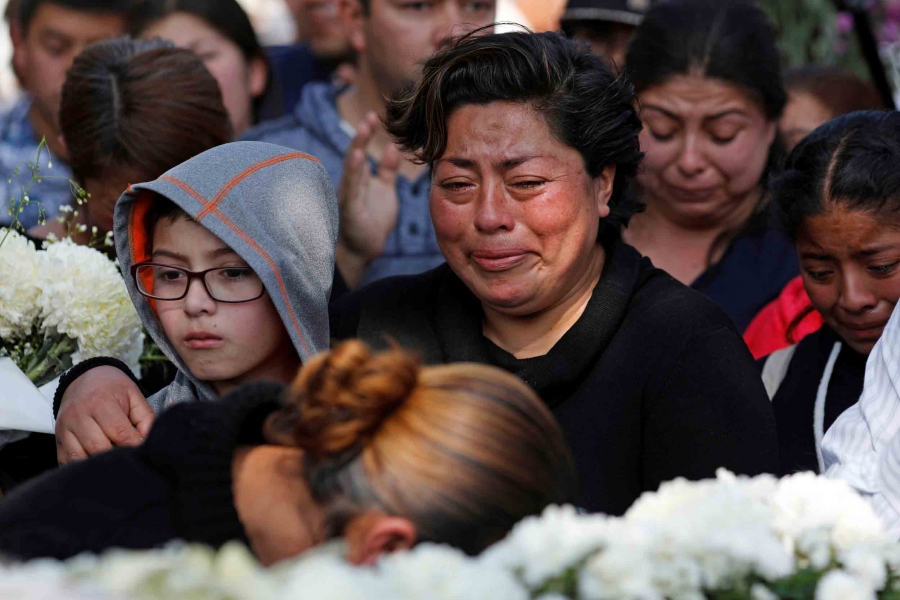 Relatives of Cesar Jimenez Brito, 40, who died during the explosion of a fuel pipeline ruptured by oil thieves, mourn during his funeral service at the cemetery in the municipality of Tlahuelilpan, state of Hidalgo, Mexico, on Jan. 20, 2019.

Why is there so much fuel theft in Mexico?

Mexico's fast-growing motor fuel market is a juicy target for thieves. It is the world's sixth biggest, according to energy ministry data, featuring a total daily demand of nearly 1.18 million barrels of gasoline and diesel.

The Mexican government's lack of attention has allowed organized groups to open clandestine taps along Pemex's main pipelines. Internal complicity at Pemex refineries and terminals have also opened the door for theft of entire trucks loaded with fuel.

Fuel stolen from Pemex's infrastructure mostly ends in the hands of the same retailers that legally sell Pemex gasoline and diesel. 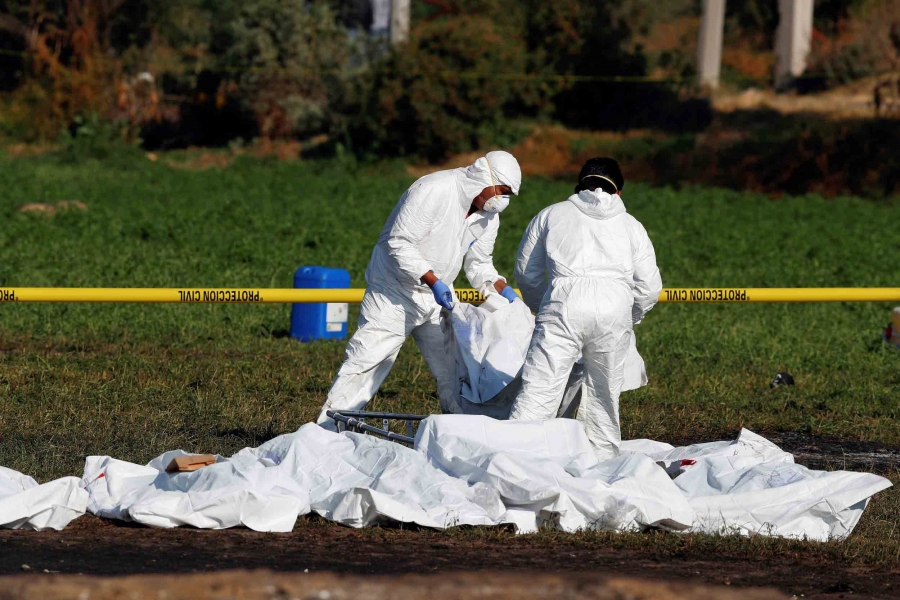 How did fuel theft start and who is responsible?

Fuel theft has been a problem in Mexico for decades but it has been growing in recent years. The crackdown on the drug war has caused gangs to turn to other forms of theft, and the nation's network of pipelines proved to be ripe targets.

Theft escalated in recent years following reforms to the country's oil sector by previous President Enrique Pena Nieto, who liberalized the industry for foreign investment. In turn, retail prices rose, giving cartels an opportunity to undercut those prices through black-market sales of gasoline.

Thieves tap into pipelines and are currently siphoning off the equivalent of around one-fifth of total national gasoline consumption, about 150,000 barrels per day (bpd) according to Reuters calculations based on official data. They then re-sell mostly to complicit gas stations.

Pemex documented more than 12,500 illegal taps to its fuel pipeline network during the first 10 months of 2018, more than in the previous year. The widespread theft costs Pemex more than $3 billion annually, according to official numbers.

López Obrador has said upwards of 80 percent of the theft is organized by Pemex employees, though he has not provided evidence. He has also pointed to reports that the union has been restricting access to parts of the company's operations.

Central and western states including Queretaro, Guanajuato, Hidalgo, Michoacan and Jalisco are most afflicted by the pipeline theft, as well as Pemex's Salamanca refinery, which has been especially plagued by organized crime and violent disruptions. 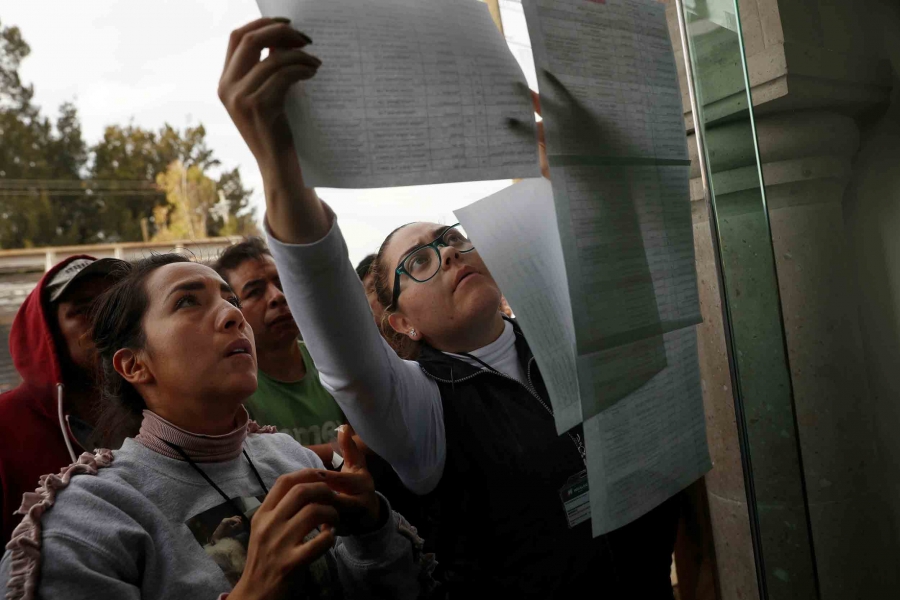 A woman places a list with names of people injured during the explosion of a fuel pipeline ruptured by suspected oil thieves on Jan. 19, 2019.

For years, Pemex's six domestic oil refineries have operated well below their capacity, due to a mix of underinvestment, deferred maintenance and frequent accidents, including deadly explosions that have provoked costly stoppages.

Last year, the refineries operated at about a third of their 1.63-million-barrel-per day crude processing capacity, compared with 2013, when they processed nearly 1.4 million barrels of crude a day. 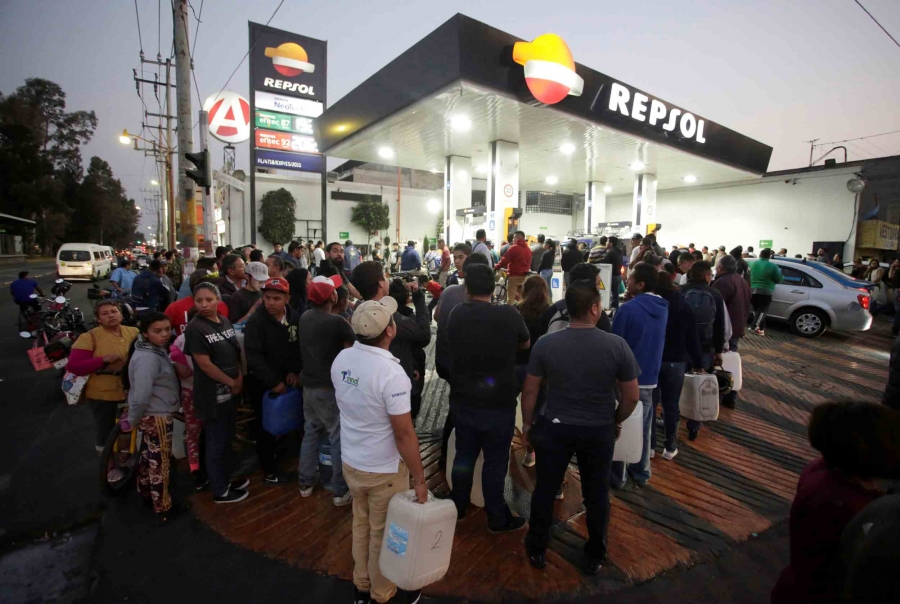 People stand in line at a gas station, in Mexico City, Mexico, on Jan. 9, 2019. When President López Obrador closed gas pipelines, it caused shortages around the country.

How does Mexico meet its fuel needs?

Mexico has grown increasingly dependent on fuel imports in recent years, with imported gasoline, distillates and liquefied petroleum gas growing last year to about two-thirds of total demand. In 2016, imports and domestic production each accounted for roughly half.

Mexico has 16 marine terminals capable of receiving imported fuel, plus 74 storage facilities and over 8,800 kilometers of pipelines. The imports flow mainly through the Pajaritos, Tuxpan and Veracruz terminals on the country's Gulf coast, which have recently turned into bottlenecks for the imports.

Mexico is a critical export market for US refiners and trading firms, and is the biggest buyer of US gasoline and diesel. In October, the United States exported 621,000 bpd of gasoline to Mexico, accounting for roughly 60 percent of the 1.03 million bpd exported that month, according to the U.S. Energy Information Administration (EIA).

While the volumes are much lower than supplies transported by sea, rail shipments of fuels across the U.S.-Mexico land border have also grown substantially as U.S. firms have capitalized on Mexico's growing demand, hitting record highs several times since early 2017, according to data from the Association of American Railroads, the largest U.S. rail trade group.

What is the government doing?

The new government began the closure of major fuel pipelines on Dec. 27. Production at Pemex's Gulf coast Madero and Minatitlan refineries has also been partially or completely halted, which contributes to the need for imported fuels as a replacement.

López Obrador hopes some 5,000 tanker trucks can distribute supplies to more than 11,000 gas stations scattered across the country. While the vast majority of the stations are Pemex franchises, a growing number belong to new private entrants, including giant Exxon Mobil Corp and trading firm Glencore Plc, which in some cases import their own fuel.

The cost of transporting gasoline and diesel by tanker trucks is nearly 14 times more expensive than via pipelines, according to a study by Mexico's Federal Commission for Economic Competition, or Cofece.

Both Pemex and López Obrador have sought to assure an increasingly restless public that there is plenty of gasoline and that refineries and other key installations are being supervised by 4,000 soldiers. He has also pleaded with citizens to be patient while the new distribution system is normalized.

López Obrador's team has yet to explain how it will finance the much more expensive distribution costs it is now incurring.