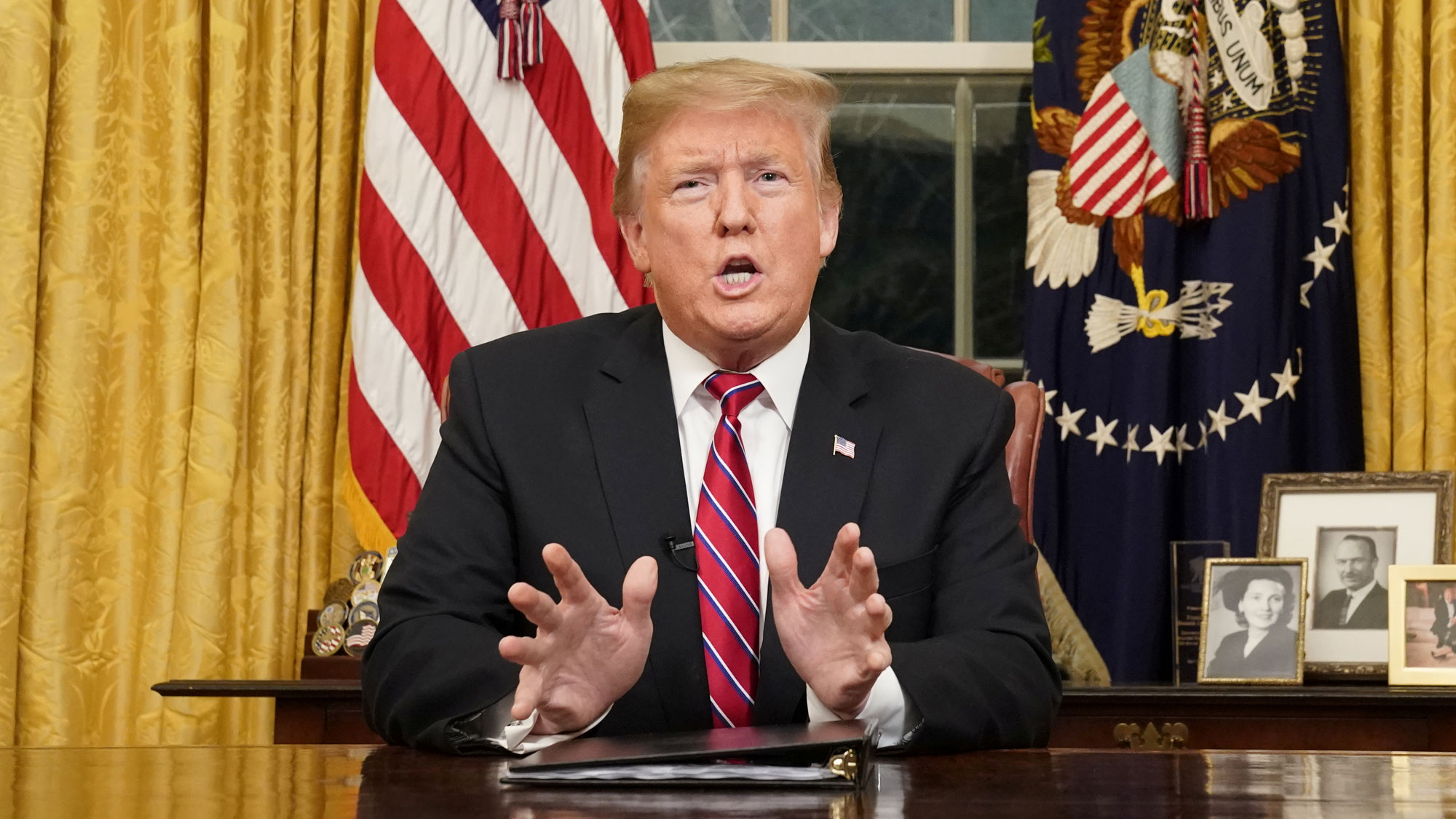 US President Donald Trump delivers a televised address to the nation from his desk in the Oval Office, Jan. 8, 2019.

Facing opposition in Congress to a wall that he has promised to build, President Donald Trump, in his first prime-time address from the Oval Office, said that there was a growing security and humanitarian crisis at the US-Mexico border and called for $5.7 billion to help construct a wall along the border.

Using blunt language in an attempt to win public support, the Republican president said illegal immigrants and drugs flowing across the southern border posed a serious threat to American safety.

"How much more American blood must be shed before Congress does its job?" he said, recounting gruesome details of murders he said were committed by illegal immigrants.

But after days of hinting he might use presidential powers to declare an emergency as a first step toward directing money for the wall without congressional approval, Trump said he would continue seeking a solution to the impasse with Congress.

Trump's speech came 18 days into a partial government shutdown precipitated by his demand for the wall. Public opposition to the shutdown is growing and that could hurt Trump, as he said last month he would be proud to close the government to fight for the wall.

Democratic leaders, in a rebuttal also carried live on national television, accused the president on Tuesday night of using fear tactics and spreading misinformation about the situation along the border.

"The president has chosen fear. We want to start with the facts," said Nancy Pelosi, Democratic speaker of the House of Representatives.

"The fact is, President Trump has chosen to hold hostage critical services for the health, safety and well-being of the American people and withhold the paychecks of 800,000 innocent workers across the nation, many of them veterans," she said.

A Reuters/Ipsos poll released on Tuesday found that 51 percent of adults mainly blamed Trump for the shutdown, up 4 percentage points from late December, while 32 percent blamed congressional Democrats and 7 percent faulted Republicans in Congress.

Republican lawmakers have increasingly expressed concerns about Trump's handling of the long-running dispute.

But he has shown no signs of giving up. He is scheduled to visit the southwest border on Thursday and may still choose to make the national emergency declaration.

Vice President Mike Pence told reporters on Monday the president was considering the possibility and the White House counsel's office was studying its legality.

Democrats and other opponents of a wall have threatened to take legal action if Trump issues an emergency order.

They say he is manufacturing a crisis in a bid to meet his 2016 presidential campaign promise for a wall that he said at the time would be paid for by Mexico. The Mexican government has refused to provide such funds.

Trump was to meet at the White House on Wednesday with Democratic and Republican congressional leaders.

Politics colored the remarks from both sides on Tuesday.

Trump said African-Americans and Hispanics were especially hard hit by the border crisis; both groups are key Democratic constituencies. Pelosi pointedly mentioned that veterans were hurt by the shutdown; Trump has courted veterans as a candidate and as president.

Trump at times tried to adopt a softer tone. "This is a humanitarian crisis, a crisis of the heart and a crisis of the soul," he said, suggesting that women and children were among the migrants often victimized by trafficking across the border.

Hoping to demonstrate flexibility during his nearly 10-minute speech, Trump said of the border barrier he wants built: "At the request of the Democrats it will be a steel barrier and not a concrete wall."

But Democrats have opposed not just the construction materials to be used, but the extent of a project that could end up costing more than $24 billion over the long run.

Democrats also argue that a mix of fencing, which already has been constructed in many parts of the border, and higher-tech tools would be cheaper and more effective in securing the border.

Pelosi said Trump rejected bipartisan legislation to reopen the government agencies shuttered as a result of the fight over the wall, and that he was obsessed with "forcing American taxpayers to waste billions of dollars on an expensive and ineffective wall."

She has previously called the wall immoral. Trump took issue with that in his speech.

"The only thing that is immoral is the politicians to do nothing and continue to allow more innocent people to be so horribly victimized," he said.

Senate Democratic leader Chuck Schumer, who delivered a rebuttal along with Pelosi, urged the president to reopen the government while the debate over immigration policies continued.

"The symbol of America should be the Statue of Liberty, not a 30-foot wall," he said. "So our suggestion is a simple one. Mr. President: Reopen the government and we can work to resolve our differences over border security. But end this shutdown now."

By Jeff Mason and Richard Cowan/Reuters