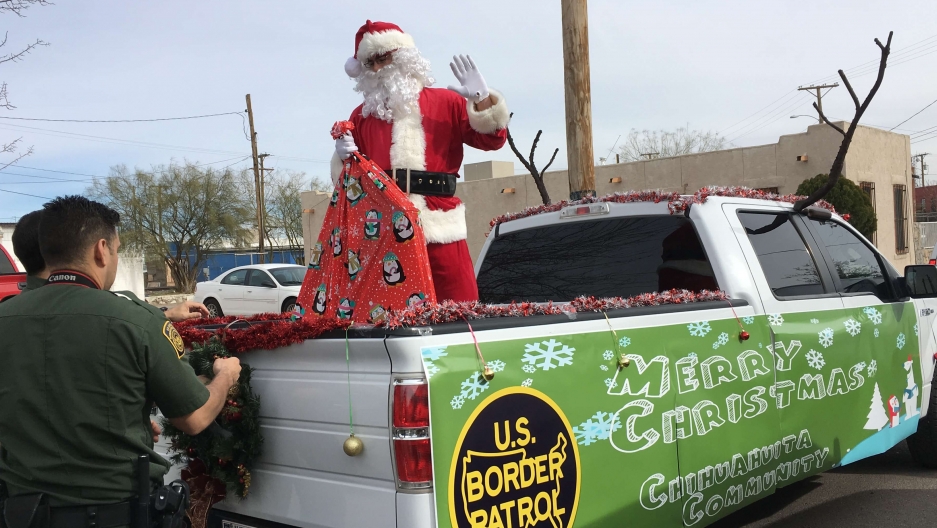 A few days before Christmas, Border Patrol agents arrive in El Paso's Chihuahuita neighbohood with Santa Claus, ready to deliver gifts. They have donated Christmas gifts to this community for at least 26 years.

A few days before Christmas, Santa Claus delivered gifts to kids in a historic neighborhood that flanks the US-Mexico border. His helper, dressed in green, wasn’t an elf — he was a Border Patrol agent.

This visit is an annual tradition in El Paso’s Chihuahuita neighborhood, where border security is an everyday concern and a decade-old border wall stretches behind people’s backyards.

Santa arrived waving from the back of a white, double-cab pickup. In past years, he’s come on horseback. A stream of cheering children always follows close behind.

Towering behind this boisterous scene is an 18-foot-tall steel mesh fence that went up beginning in 2008, financed by former President George W. Bush’s 2006 Secure Fence Act. The barrier is an awkward backdrop to a row of humble adobe homes lined up along a narrow street designed before the days of motorized traffic.

Related: Mexicans and Americans bond over a giant baby and a border wall

“We didn't like it at first,” said Mannys Rodriguez, president of the Chihuahuita neighborhood association. “But we've grown to accept it. It's helped us.”

Rodriguez held her infant grandchild against her chest, the fifth generation in her family to call this community home. Chihuahuita’s origins go back two centuries before Mexico became a republic. Now, Mexico is a two-minute sprint away, across the Rio Grande’s mostly dry riverbed. 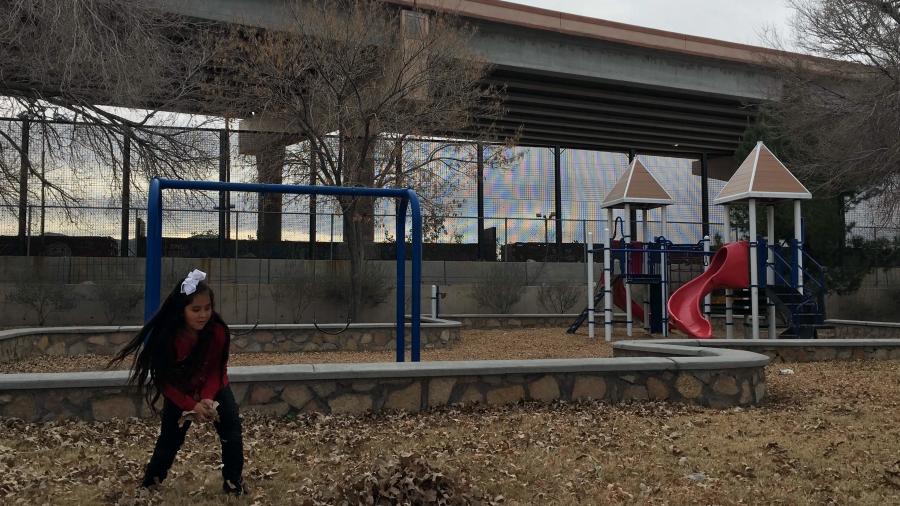 Yaretzi Sanchez, 6, plays in the Chihuahuita park where the backdrop is an 18-foot steel border fence, erected a decade ago as part of the Secure Fence Act of 2006.

“As we were growing up, they used to throw rocks over here,” she said.

Rodriguez and others in the neighborhood say they watched drug mules ferry bundles across the park and migrants run through backyards. Laundry would get snatched off the line, bikes would go missing.

“There was a time during the late 80s, especially early 90s, where this community was not safe,” said Border Patrol spokesman Joe Romero. “They had what they used to call El Puente Negro (The Black Bridge) gang.”

The gang was named for a nearby railroad bridge that connects El Paso to neighboring Ciudad Juárez.

“You're talking about a gang that lived just a stone’s throw away from us in Juárez, come across, commit a crime, and by the time we reacted, they were already back in Mexico,” he said.

Residents say Chihuahuita today is much safer due to a combination of reasons, including the border wall. It doesn’t stop people from crossing unlawfully, but it makes it harder. Border Patrol agents say it buys them more time to make an arrest before their target disappears into the surrounding urban fabric. Romero said even an extra minute or two makes a difference.

The Border Patrol’s annual Christmas visit, now going on at least 26 years, is about breaking barriers and building better relationships with the community. That can be challenging when agents are tasked with carrying out what critics call inhumane enforcement measures under the Trump administration. 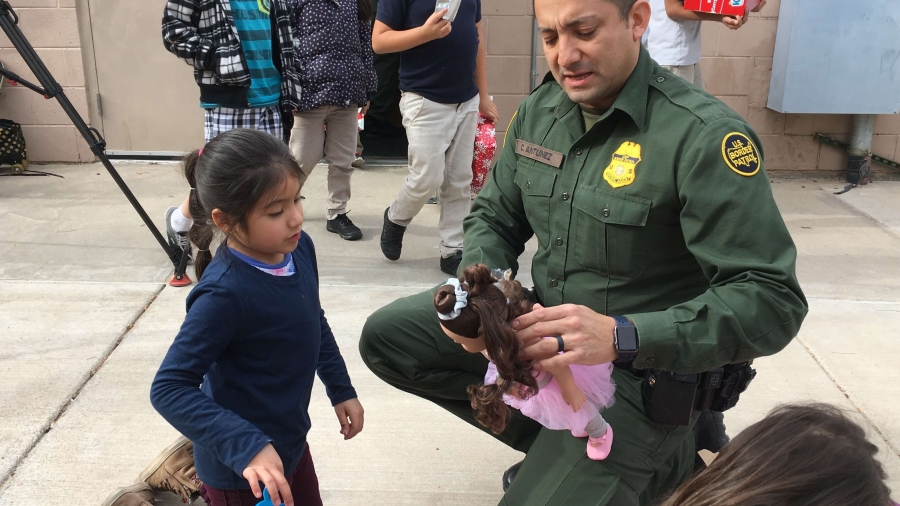 “The members that live in this community know what's happening,” Romero said. “It's very important to have that working relationship with the adults, so they understand what our mission is, what we're doing, and of course, get their feedback on what they feel is working, what isn’t working.”

For Erica Pulido, a healthcare worker and mother of three, the steel monolith outside her front door is working. She says she feels safer. But at the same time, its symbolism bothers her.

“I do have mixed feelings about it … because I have my family in Juárez, so it’s hard,” she said. “I have cousins, my great-grandparents, sisters, brothers.”

Lawmakers and the president must now decide whether funding for additional border walls is worth continuing this latest government shutdown.

The shutdown means that the border agents who keep watch over this neighborhood, like thousands of other federal employees, will work without pay until Washington comes to a consensus.