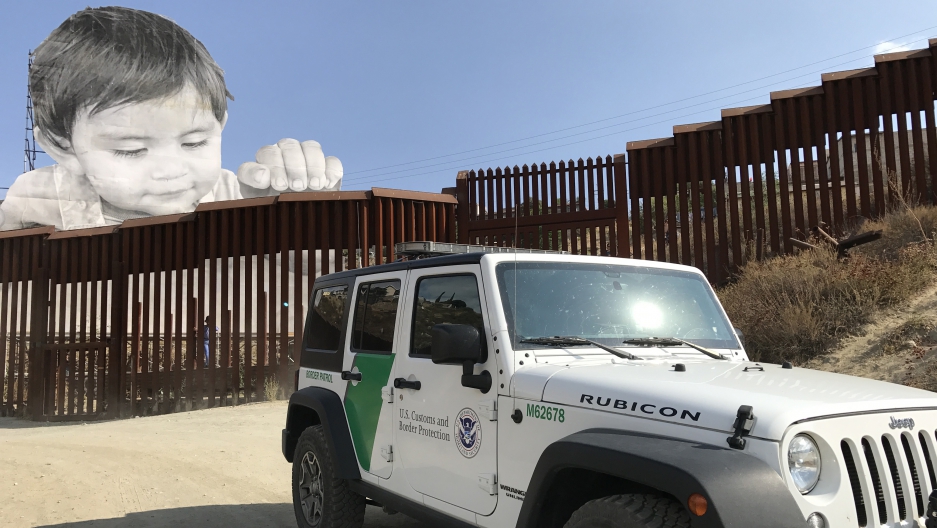 A US border patrol vehicle drives past JR’s installation in Tecate, about a 40-mile drive southeast of downtown San Diego on Sept. 9, 2017.

The US-Mexico border wall as an interactive art museum? That’s what French artist JR had in mind when he created a 65-foot-tall image of a baby looking over the wall in Tecate, California.

JR is known for pasting larger-than-life photographs of people on large public walls around the world, from Havana to Tunisia. The idea for creating this installation at the US-Mexico border came to him in a dream.

“I dream about walls because I paste on walls all day,” JR said in a phone interview from New York City. He said he kept hearing President Donald Trump talking about the US-Mexico border wall. “You can’t really explain dreams, but I think that’s how I came to think about a little kid looking over that wall.” 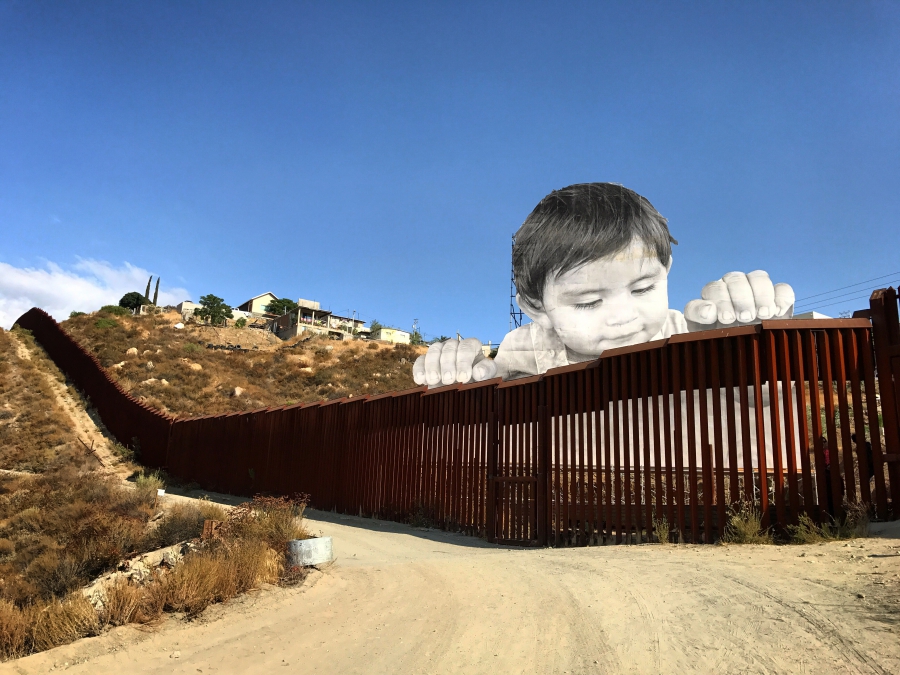 JR’s artwork towers about 40 feet over the US-Mexico border wall. There are barriers along about three-fourths of the border between San Diego County and Mexico.

It was a coincidence that the launch of JR’s piece last week coincided with the Trump administration’s reversal of the Deferred Action for Childhood Arrivals (DACA) program, which protects some undocumented immigrants who came to the US as children from deportation.

“Of course, I hadn’t planned it,” JR said. “We did the piece, and I just posted one image that says ‘work in progress,’ and that image went around the world and back. And I didn’t have the time to say what it meant. I didn’t have to because it was pretty clear already.”

On Thursday, President Trump and leaders in the Democratic Party said that they were close to a deal not to displace undocumented immigrants brought to the US as children. Democratic Senate Minority Leader Chuck Schumer and House of Representatives top Democrat Nancy Pelosi said while the deal could include increased border security, it won’t fund a complete wall along the southern border.

Trump said that "the wall is going to be built, and it will be funded later." 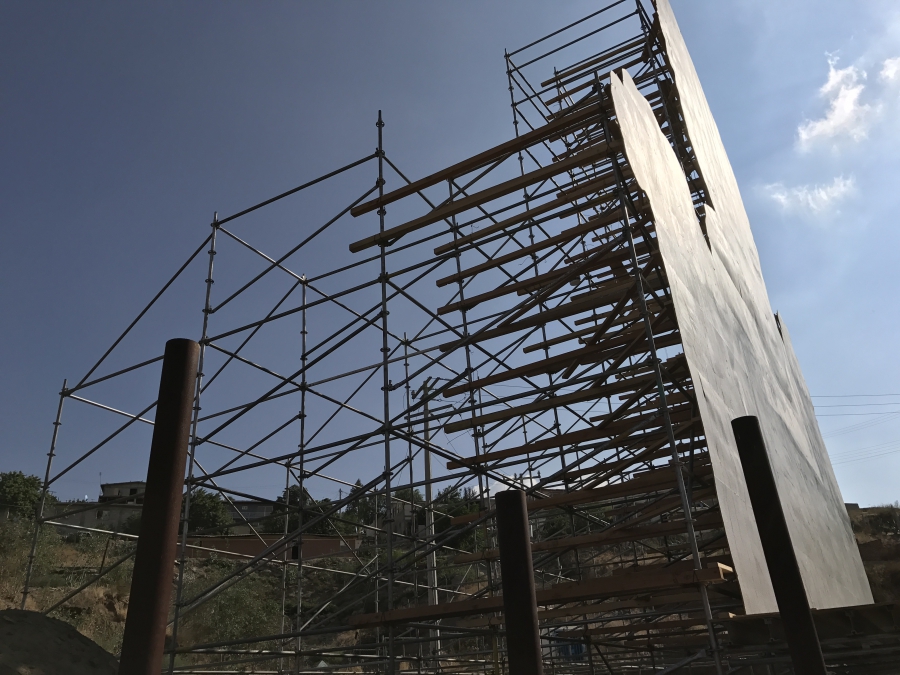 It took JR’s team a month and a half to build the scaffolding on the Mexico side, and just one day to paste the image of the boy.

Rather than making political statements, though, JR said he wants his artwork to create discussions and prompt people to interpret his pieces in their own way. “I want to see how people react on both sides,” he said.

Several months earlier, when JR scouted locations for this art project along the Mexico side of the border, he met a family living in a house next to the border wall. As he talked to the mother and daughter about his planned installation, JR saw a baby named Kikito quietly peeking over the railing of his crib.

“I said hello to the little kid, and we played a little,” JR said. “But, I didn’t think of photographing him.” Soon after JR drove away, he realized that the child resembled the boy in his dream, and he turned around. "I came back and thought then, 'He's the little kid.'"

Now, the image of the baby boy towers about 40 feet above the border wall on intricate scaffolding that took a month and a half to build. Kikito’s mother sees this enormous image of her son right in front of her home every day.

“She was so happy, and she told me she hoped the image travels around the world,” JR said. “In her own words, she said it should help people think that they are not criminals; they are not rapists, which is how she feels Mexicans are often being portrayed.”

Kikito’s mother told JR, “He’s just a little kid; he’s 1 year old, that’s why he has no political vision about the wall yet. He’s just looking at anything around him with curiosity.” 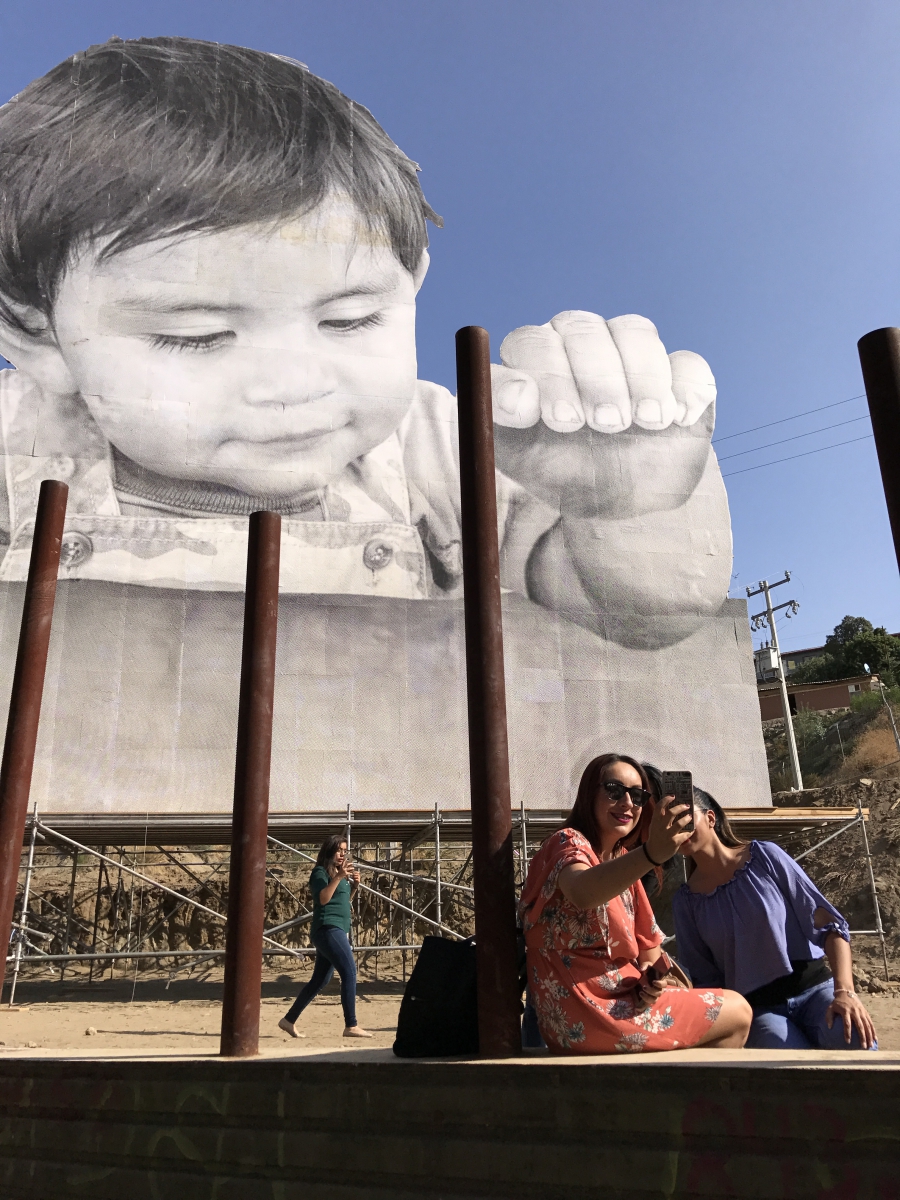 Visitors on the Mexico side take selfies with JR’s artwork.

On Sept. 8, JR posted the exact coordinates of the location on his Twitter feed. Then, he waited. Soon, people began arriving on both sides of the border.

“I love to let the interaction happen, and not have it be around the artist, but around the people,” he said.

Tecate is about an hour's drive from San Diego. To get there on the American side, you go through the small towns southeast of San Diego, and then along a winding road through rocky, hilly terrain. There’s a combination of a fence and a wall stretching for miles through the hills. 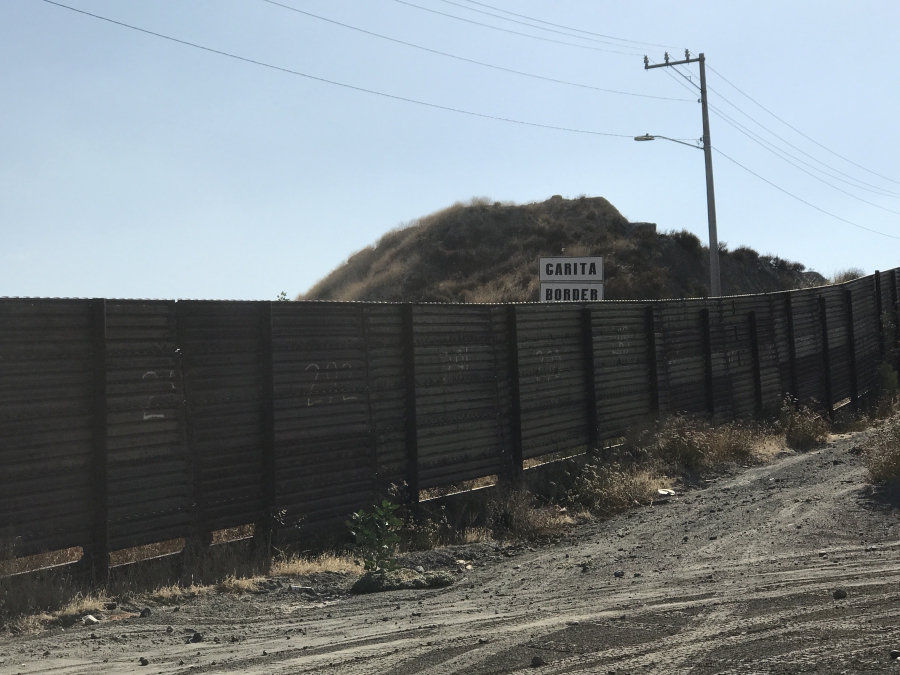 A shorter border fence separates the US and Mexico just a few minutes' drive away from the location of JR’s art piece.

“The artwork is an excuse to bring you over there,” JR said. “A lot of people, I’m sure, live maybe an hour away from the border that never saw it. So, sometimes you have to create something gigantic so that people can go and see it with their own eyes.”

The last stretch to arrive at the installation is an unpaved dirt road, a dusty two-mile stretch full of dips and bumps. Last weekend, as small groups of people made the journey, US border patrol jeeps positioned along the road did not stop the visitors.

US border patrol officers did not block JR and his team, either, when they were creating the large scaffolding on the Mexico side of the border.

“We were kind of in the middle of the road,” JR said. “We were talking with the other side frequently. We brought a lot of people to the place. And, they’ve always been very nice, and [border patrol agents] said, ‘Don’t worry, we won’t block the road.’”

“The fact that they don’t interfere basically means they let it happen. When we were doing it, they were understanding that the piece could only help in a positive way. They didn’t want to take sides with the wall or anything,” he said. “I always find out that the limits are not what I thought they were. That people are much more open than I thought they would be.”

At the end of this dirt road, the face of the 1-year-old child curiously looks over the wall, into California. Groups of people on the Mexico side also came to see JR’s artwork last weekend, as word of the installation had spread in Baja California. Visitors on both sides chatted through the slats of the fencing and passed phones back and forth to photograph each other. People on the US side took selfies through the holes of the wall with visitors on the Mexico side. At that moment, the wall almost became invisible. 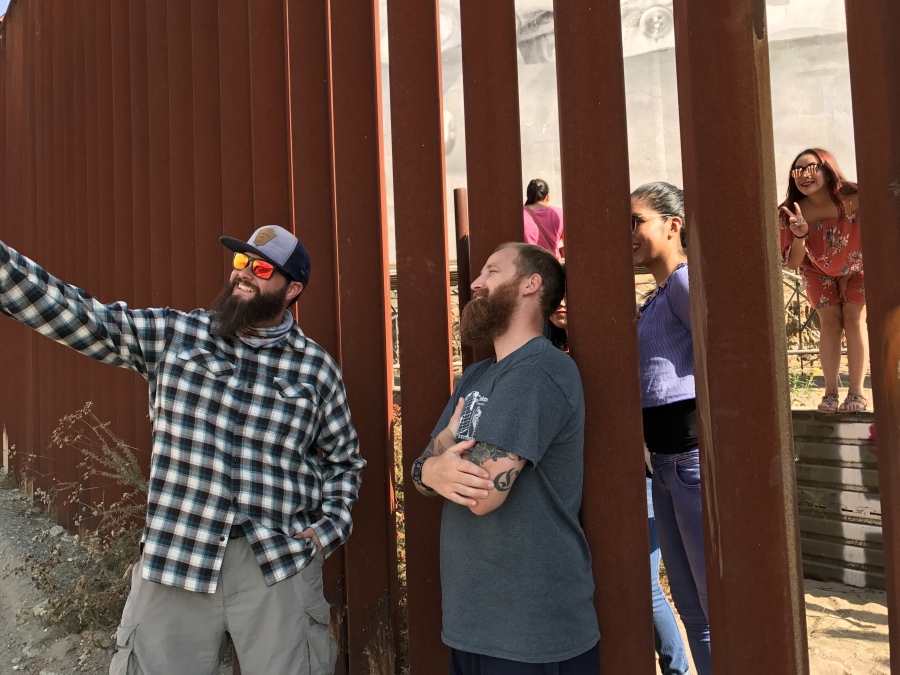 People on the US side of the border take selfies through the border wall with people in Mexico on the other side, just below JR’s art installation.

“I think that’s the most interesting part, the fact that it connects people. I always love to think as an ethnologist,” said JR. “The fact that you went there, and you tell me that people exchanged their phones through the fence and it created interaction between people that would never talk, for me, that’s the most amazing part of the project.”

JR posted photos of people who gathered on both sides of the border last weekend for his 1 million Instagram followers. He also plans to hold a small event at his installation before it comes down in less than a month.

“Most of what I do is very spontaneous,” JR said, “so there’s never any press release for anything I do. This event, I might announce a couple days before on Instagram.”

More: A giant border wall between the US and Mexico? Here are five images that show how complicated that would be.