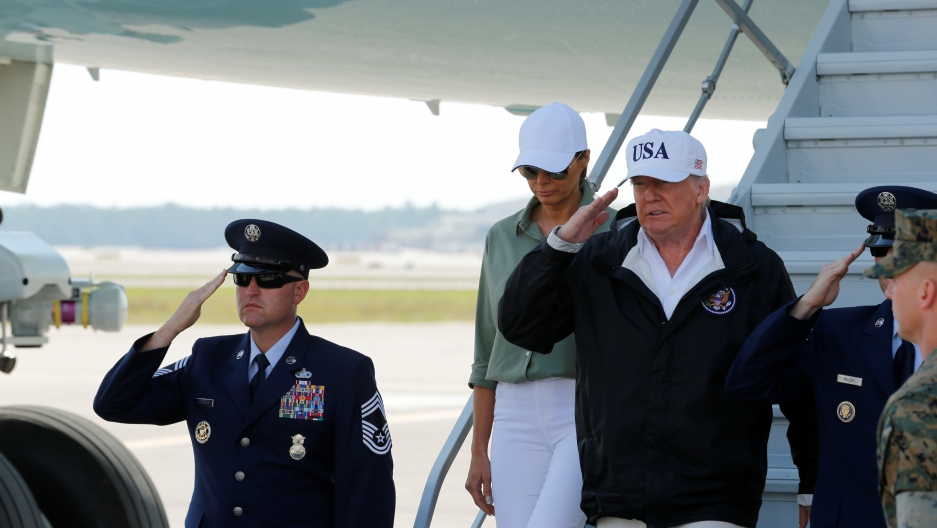 US President Donald Trump returns a salute as he and first lady Melania Trump step off Air Force One in Fort Myers, Florida, Sept. 14, 2017.

President Donald Trump said Thursday he was "fairly close" to finalizing a deal with Democrats allowing young immigrants to remain in the United States, antagonizing anti-immigration Republicans who worry he is violating his own campaign pledges.

"Does anybody really want to throw out good, educated and accomplished young people who have jobs, some serving in the military? Really!" Trump tweeted, hours after he hosted a dinner meeting with top congressional Democrats in which they discussed securing the border in exchange for protections for immigrants known as "Dreamers."

"They have been in our country for many years through no fault of their own - brought in by parents at young age," he added.

Trump was repeating a key Democratic argument for allowing young people who arrived illegally in the United States as children to stay.

Related: Why the former DHS secretary thinks DACA should continue

Trump rescinded that executive order, prompting jubilation among many in his camp, but then urged Congress to craft a legal solution within the next six months.

"I think we are fairly close but we have to get massive border security," he told reporters Thursday.

"We are working on a plan for DACA. People want to see that happen."

"There was no final deal, but... we agreed that the President would support enshrining DACA protections into law, and encourage the House and Senate to act," they said in a joint statement.

"What remains to be negotiated are the details of border security, with a mutual goal of finalizing all details as soon as possible," they added.

The package could include using new technology, drones, air support and sensors, the Democrats said.

They also said no funding for Trump's long-promised wall on the US-Mexico border would be in the DACA deal, although the president stressed that "the wall is going to be built and it will be funded later."

Also: Coming to America: A mistake? Many parents of DACA recipients are wondering.

The working dinner was the second time in a week that Trump huddled with Democrats. Last week he struck a deal with Pelosi and Schumer on bundling hurricane relief with raising the debt ceiling and extending government funding.

Trump's apparent willingness to work with top Democrats rather than his own party's leaders who control the House and Senate, and his repeated attacks on Republicans on Twitter and during campaign-style rallies, has fueled suggestions he is striking out on his own, all too willing to leave his party in the dust.

"I don't see him changing his political style just to get along with Republicans."

House Speaker Paul Ryan, who was present at last week's meeting but not Wednesday's dinner, has expressed support for legalizing hundreds of thousands of Dreamers.

But the issue has struck a chord with Trump's core supporters, many of whom expected the president to hold the line on immigration.

More: DACA recipients won’t go back into the shadows quietly

If reports of Trump's DACA deal are correct, the "Trump base is blown up, destroyed, irreparable, and disillusioned beyond repair. No promise is credible," House Republican Steve King, a fierce anti-immigration advocate, said on Twitter.

"It looks to me like he's preparing to keep (Democrat) Hillary Clinton's promise rather than his own," he added on CNN.

Even prior to Trump's DACA dealmaking, he signaled an independent streak not seen in a US president in generations.

He has hammered Republicans for failing to repeal the Affordable Care Act, sacked his chief of staff Reince Priebus — one of the most powerful party bosses in modern times — and warned Republican lawmakers he will oppose their re-election if they defy his populist agenda.

"We voted for #MAGA, not #DACA," Walsh tweeted. "Pull your head out Mr President."