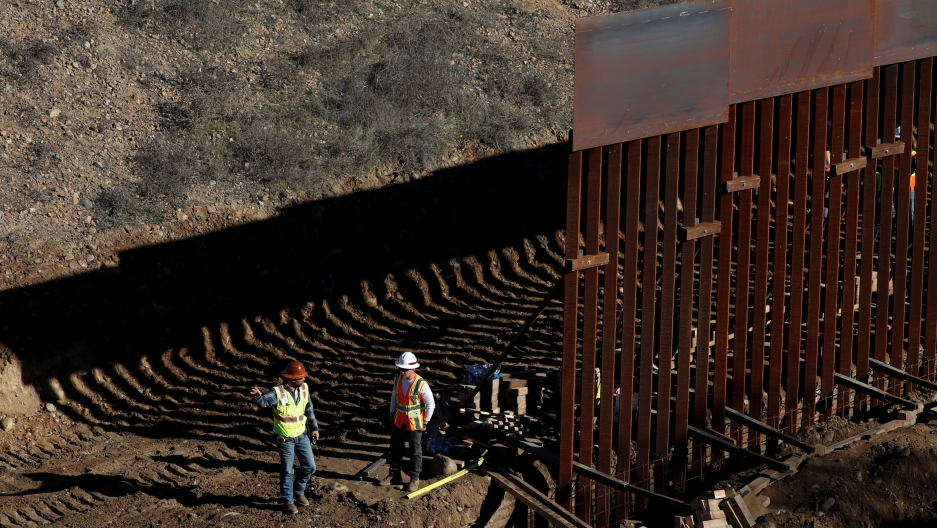 Workers on the US side, work on the border wall between Mexico and the US, as seen from Tijuana, Mexico, Dec. 13, 2018.

US President Donald Trump on Thursday said border security must be part of legislation to fund the US government, a position that raises the threat of a partial federal shutdown on Saturday.

Trump told fellow Republican leaders in Congress he will not sign a Senate-passed bill because it fails to include enough funding for border security. Republicans in the House of Representatives were scrambling to try to amend the bill to appease Trump.

"I've made my position very clear. Any measure that funds the government must include border security," Trump said at a White House event.

Trump has demanded $5 billion to put toward building a wall on the US border with Mexico that he argues is needed to keep out unauthorized immigrants and drugs, a downpayment on a massive project which Democrats have rejected as ineffective and wasteful.

Trump was expected to start a two-week vacation in Florida on Friday.

US stocks, which were already sharply lower on the session, extended losses on the possibility of a shutdown, with the S&P 500 down 1.5 percent on the day.

Trump has said he sees the border wall as a winning issue for his 2020 re-election campaign. Last week in a White House meeting with Democratic congressional leaders, he said he would be "proud to shut down the government for border security."

The Senate bill approved on Wednesday had provided a seven-week extension of existing funds for agencies, punting the funding issue into the next Congress.

Push from the right

Hard-right conservative pundits and lawmakers have urged Trump to push for border wall funding now, even if it leads to a shutdown, arguing that it would be impossible to get once Democrats take control of the House on Jan. 3.

"He [Trump] campaigned on the wall," Republican Representative Mark Meadows said. "It was the center of his campaign ... the American people's patience is running out."

The House Rules Committee was to meet later on Thursday to determine how to add the $5 billion in an amendment to the Senate bill, its chairman, Pete Sessions, told reporters.

If the House fails to pass the amendment, it is unclear whether Trump would sign the funding bill, Sessions said. "We’re all putting that in the calculator," he said.

Related: Designs for Trump's border wall are here. They fall into 4 categories.

Representative Steve Scalise, the No. 3 Republican in the House, told reporters that his members also would try to add funding for states hit by recent natural disasters.

House Democratic Leader Nancy Pelosi has said including border wall money in the bill would be a "non-starter" for her members. They were, however, open to the disaster aid, she said.

If the government goes into partial shutdown starting on Saturday, it could last until the new Democratic majority takes over in the House. Then it will have enough votes to pass a funding bill to send to the Republican-controlled Senate, leaving it up to Trump to decide whether to veto it.

Trump administration officials were looking for ways to build the wall by reassigning money already doled out to US agencies for other projects.

The White House has not provided details of that effort but leading Democrats have warned that shifting funds around in such a way would have to be approved by Congress.

During his 2016 campaign, Trump repeatedly said Mexico would pay for the border wall but never specified how. Last week he said that a new trade deal his administration had negotiated with Mexico and Canada would generate enough savings to be equivalent to Mexico financing the wall.

Related: How ‘The Wall’ could kill a Texas city

Money for the wall also led to a partial government shutdown during a weekend in January and a second funding gap in February lasted only a few hours. Impact on government services was negligible in both cases.

In a 2013 shutdown, conservative Republicans made an unsuccessful effort to use funding bills to repeal President Barack Obama's healthcare law.