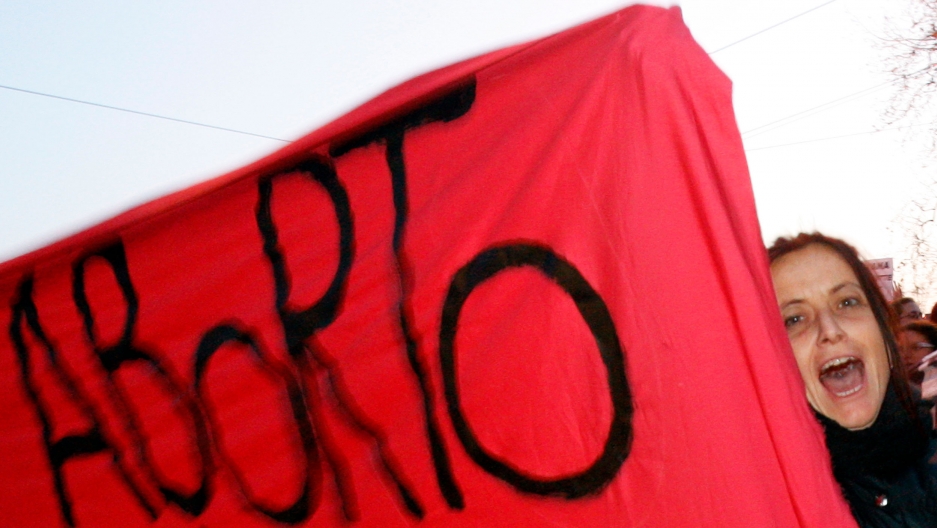 A woman shouts slogans during an abortion-rights demonstation in downtown Rome in this 2008 file photo. Italy has had legalized abortion for 40 years, but doctors can opt out of the procedure as conscientious objectors. In some parts of the country, 90 percent of health care providers refuse to perform abortions.

Italy legalized abortion 40 years ago. But according to a group of Italian gynecologists, access to the procedure has been declining for years now.

The main reason is that fewer doctors who work in Italy's public health facilities are willing to perform abortions. Italy's abortion law requires all hospitals to provide access to the procedure. But the law also gives gynecologists the option to declare themselves “conscientious objectors.”

“For example, in the public University of Rome, we have more than 60 doctors but only two provide abortion, only two,” said Silvana Agatone, a gynecologist in Rome.

Agatone is the president of a group of gynecologists that wants to make it easier for Italian women to get an abortion. She says that conscientious objections are happening more often even when women’s lives are in danger. So, in practice, when women show up at a public hospital in Italy seeking an abortion, many of them end up being turned away.

“In 2005, the percentage of gynecologists that didn't provide abortion was about 59 percent,” she said. “Now [it is] 70 percent. And it's growing every year.”

In some parts of the country, the percentage of doctors who refuse to perform abortions is as high as 90 percent.

And it's not just gynecologists who can refuse to carry out an abortion. Nurses and anesthesiologists can refuse to perform the procedure on moral grounds.

Related: As access to abortion gets harder in the US, women turn to an online service in the Netherlands

An unintended consequence is that those doctors who are still willing to perform an abortion are starting to feel pretty isolated, Agatone says.

“Because [people] around you look at you like you are a criminal and then [they] don't help you in your work [then] you have more risk if you have a complication,” Agatone said.

Agatone says it's all about politics. Far-right and populist parties in Italy are on the rise, and their members tend to be more socially conservative. Some conservative groups, like the League and the populist party known as the Five Star Movement, have called on the Italian government to criminalize abortion once again.

In the short term, this petition is unlikely to gather Parliament’s support, but Agatone says Italians who support abortion rights can't let their guard down.

Agatone and other gynecologists who support abortion rights are collecting signatures as part of their campaign to push the Italian government to guarantee access to abortion.

They want to require public hospitals in Italy to always have enough doctors and nurses on duty who are not conscientious objectors. Agatone says her goal is to make sure Italy's current abortion law is enforced.