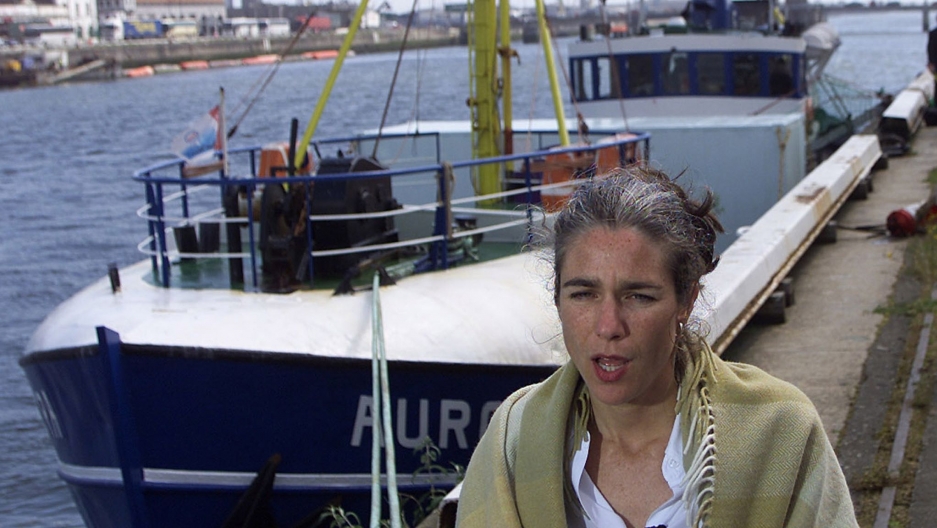 Rebecca Gomperts, founder of the Dutch-based Women on Waves Foundation, gives a television interview beside the abortion ship Aurora, rechristened the Sea of Change, while docked in Dublin, June 15, 2001. The converted fishing trawler with a makeshift treatment room welded to its deck, was to offer abortions, which have historically been illegal in Ireland.

Marie was 19 when a pregnancy test she took in the bathroom at work came out positive. That was a couple of years ago. Marie, a waitress, thought to herself, "I really can't afford to take care of a child."

It was her second pregnancy and the second time she needed an abortion. Marie decided not to go to a clinic this time, though.

Marie isn’t her real name. To protect her privacy, we’re using a pseudonym. Marie lives in a Southern state where there's just one abortion provider and legislation has been introduced to ban abortion.

“There is a lot of stigma," she said. "A lot of judging. A lot of, ‘You’re going to hell because you’re killing a baby.'"

That stigma and judging is why she decided to have a do-it-yourself abortion at home using two kinds of pills — Mifepristone and Misoprostol. The pills cause heavy bleeding and cramping, basically inducing a miscarriage.

Marie got the pills from a friend. “When it started, it felt really painful. I felt nervous knowing anything can go wrong,” she said.

Marie's state isn't the only one that makes it hard for women to access an abortion.

A recent Ohio law makes it illegal to obtain an abortion once a fetal heartbeat is detected. A number of other states have also introduced similar pieces of legislation.

According to the Guttmacher Institute, 93 percent of American women live in a state where abortion access is limited through laws with various requirements. Some have long waiting periods or mandatory counseling. In some cases, doctors must have hospital-admitting privileges. In some states, public funding for abortion is restricted to cases of rape or incest.

Beyond that, one of the biggest barriers for many women is the cost, according to Rebecca Gomperts, a doctor based in Amsterdam.

Gomperts runs an online service called Women on Web. It’s a telemedical service that’s been around for 12 years. Previously, Gomperts ran a similar operation called Women on Waves. It was a medically outfitted ship that would dock in countries where abortion was illegal. Women needing an abortion would board the ship, and Gomperts and her team would sail into international waters to perform medical abortions for them.

The group now does online medical consultations and sends abortion pills to women in countries such as Poland and El Salvador, where abortion is highly restricted or outlawed. The consultation is like a virtual doctor’s visit offered by your primary care physician.

“We are helping women around the world that cannot access abortion services get a safe abortion with pills,” Gomperts said.

Recently, they’ve expanded the service to women in another country — the United States — even though abortion is legal here.

“We got feedback from women that the pharmacies that are existing are still too expensive because they still cost about $250 or $300. So, I, as a doctor, I felt a moral obligation to help,” she said.

The pills and related treatment typically cost between $250 and $600 in the US. Gomperts’ service costs about $95.

Anti-abortion groups in the US have spoken out against these DIY abortions, saying they endanger women. But Gomperts maintains that’s not true.

“There's almost no medical procedure that is safer than that. It's safer than any plastic surgical intervention.”

Gomperts gets the pills from a pharmacy in India, one she's worked with for a long time and insists is safe.

Gomperts says that at any point, women using her service can call or Skype her with concerns. They also have to live within an hour of a hospital just in case something does go wrong. And if they need medical attention, Gomperts has this advice: “So, we tell women that they should say that they had a miscarriage and that there's no way that any doctor or nurse or whatever can find out that they used pills.”

That's to protect them from any legal issues.

Katie Knutter works in abortion clinics in Kansas and Oklahoma. In Oklahoma, abortion by telemedicine — talking to a doctor online — is banned. That means using the kind of service Gomperts offers could be punishable by jail time. That’s true in 18 other states besides Oklahoma — and some women have gone to jail for this.

“So, it may depend on that if you do go to a hospital with an anti-choice provider who suspects you might have taken something to end a pregnancy. And if they, you know, want to try and get you in trouble,” Knutter said.

Knutter says some of the women who come to her clinic travel long distances just to avoid that kind of trouble.

“I remember talking to patients, and it's like, ‘You drove how many hours?’ I think it was about six [hours someone drove] to take a medication. That was incredible.”

Despite the long drives, Knutter says she would still rather see women come to the clinic and get abortion services in person. But for those who don’t have that option, Gomperts offers a mail-order alternative in about 100 countries, now including the US. She says one of her biggest concerns as abortion laws get stricter in the US is making sure women know how to find her.

“I always have to realize that I know who the women are that are able to find me. But I don't know the women that don't know how to find me,” she said.

Marie was able to get the pills with her friend's help. She says if she were to get pregnant again, she would do the same thing. But, she knows plenty of women in her community aren’t that lucky and don’t know where to turn in case of an unplanned pregnancy.