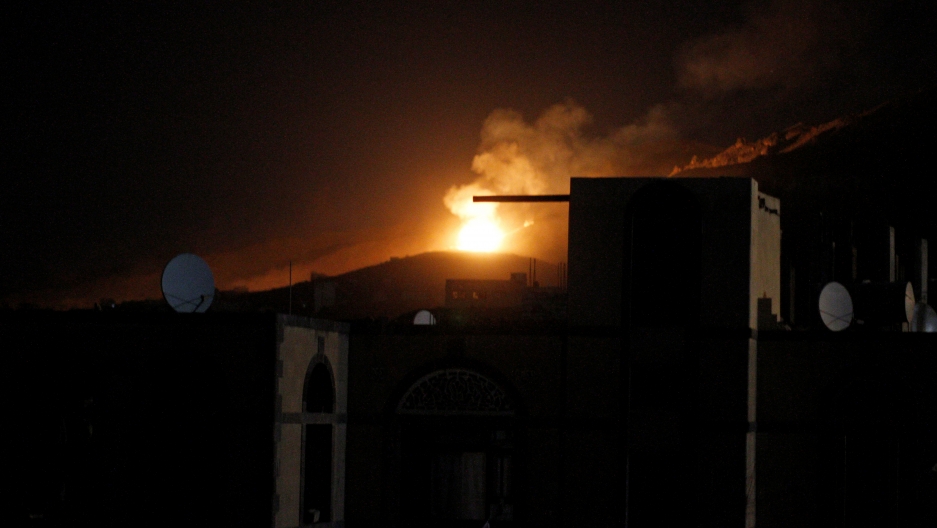 An explosion at a military arms depot is seen after it was hit by a Saudi-led air strike on the Nuqom Mountain overlooking Yemen's capital Sanaa, Oct. 14, 2016.

There was an unusual moment of bipartisanship in the US Senate on Wednesday. Senators voted overwhelmingly to support a resolution to get the US out of the war in Yemen by stopping US military support for Saudi Arabia.

When the resolution first came to the Senate floor in March, it tanked.

But this week it was a different story. Sen. Bernie Sanders, one of the bill's sponsors, was able to deliver a victory speech.

“Let me thank all of the people at the grassroots level throughout our country who helped us today win a major vote on the path toward ending US involvement in the war in Yemen,” Sanders said.

The vote was 63 to 37 — a big win — because Republicans who normally back US President Donald Trump, the military and Saudi Arabia, decided to switch sides.

“I changed my mind, 'cause I'm pissed,” said Republican Sen. Lindsey Graham. Like 62 of his colleagues on Wednesday, Graham wanted the Senate to signal to President Trump — and the Saudis — that they want a full accounting of the murder of Saudi journalist Jamal Khashoggi.

We reached out through social media to find out what Yemenis thought about the vote.

“It's great if the United States will vote to stop its weapons sales to Saudi Arabia because this will save the lives of hundreds if not millions of Yemenis,” said Hussain Albukhaiti, a journalist in the Yemeni capital Sanaa, which is frequently targeted by Saudi air strikes.

Albukhaiti is skeptical about the motivation behind the Senate vote. He calls it a publicity stunt.

“The deals that have been struck between the United States and Saudi Arabia during the war in Yemen [are] the largest in US history,” he says. “We have seen the White House statement about the killing of journalist Khashoggi. It is all about money."

Albukhaiti said he believes that a hostile Senate will give the Trump administration more leverage with Saudi leaders, so that his administration can sell them even more US weapons.

People in other parts of Yemen blame the war not on the Saudis, but on the Houthi rebels. And they want the US to stay in the war, to help Saudi Arabia defeat the Houthis.

If you leave us, the strong will eat the weak.

Try to understand Yemen and work with the locals.
The war must Stop now!!
South Yemenis must be heard

If your question was : Do you want the US to end the war in Yemen ?
The answer would be easier.
Because the answers to your question wouldn't help you. If the US drops support of the Saudi that wouldn't end the war. It just makes some change in the rules of war

Other Yemenis considered the Senate vote and saw a glimmer of hope.

“Maybe it will not stop the war totally, but at least there will be a hope for peace,” says Suha Al-Mujahed, a humanitarian worker in the southern Yemeni city, Aden. “After years of war, we are tired, we have lost a lot and stopping the military support may open a door for peace.”

The vote on Wednesday was procedural. The content of Senate resolution SJ Res 54 will be considered by the full Senate at a later date.