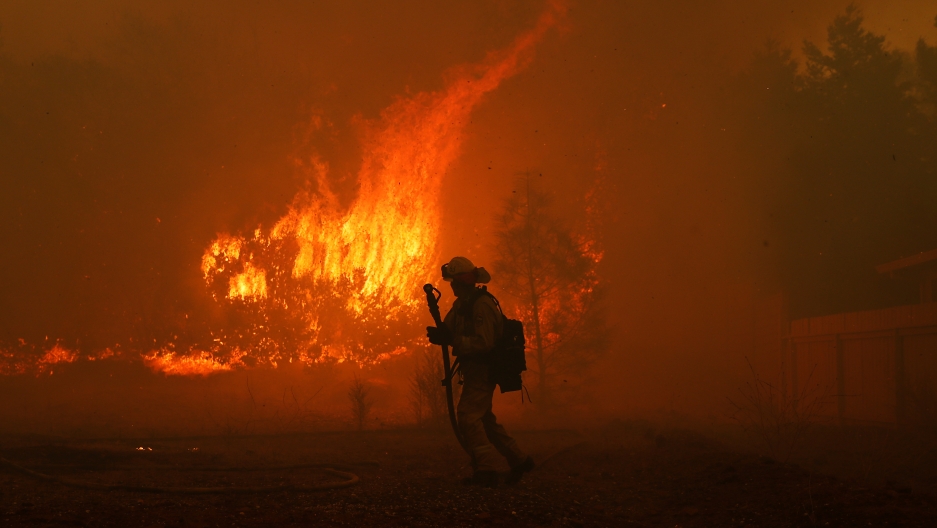 A California firefighter monitors a fire near a home while battling the Camp Fire in Paradise, California, Nov. 8, 2018.

The Camp and Woolsey fires in November 2018 engulfed hundreds of thousands of acres of land in a matter of hours and so far have claimed a record number of lives. And according to climate change scientists, the fire situation in California is likely only to worsen over time.

Of the 20 largest wildfires in California, 15 of them have occurred since the year 2000. One of the reasons is that temperatures have been rising since the start of the 21st century, says Glen MacDonald, director of the White Mountain Research Center and professor of geography at UCLA.

As temperatures go up, the spring fire season starts earlier, the winter fire season goes later and the fuels become drier and drier during the summer period.

“We're into a 365-day-a-year fire season — especially in southern California,” MacDonald says. “And we've had some pretty good fires that have come up in December, January and February, and then they start off very early in the spring.”

California Governor Jerry Brown called this level of fire activity the “new abnormal” for his state. MacDonald says he, too, once used that term, but now he thinks it’s actually misleading.

President Donald Trump recently made a statement saying that the wildfires resulted from "gross mismanagement of the forest,” and he threatened to withhold federal funding for California as a result. Like all the firefighting leadership in California and across the country, MacDonald reacted to this statement with “dismay and disappointment at comments that were ill-informed and insensitive.”

Related: A perfect storm of factors is making wildfires bigger and more expensive to control

“They're ill-informed because, for instance, the fire down here has nothing to do with forest management,” he explains. “There's no science behind that comment in this particular instance, whatsoever. And it's disheartening to hear our national leadership — instead of standing by the state and offering comfort to a large part of the country that is really suffering — taking a cheap political shot. … I think the general public, as well, is really, really disheartened by that."

The big question is, what can California do to prepare for a future of more devastating fires? It won’t be easy, MacDonald suggests, but there are some helpful steps the state can take.

“I think there are things that we can do in terms of how we manage our yards, our landscaping, the materials we use for our homes,” he says. “It seems very intrusive for the government to tell you what you can and can't plant in your garden, but that can make all the difference in the world to your house surviving or your neighbor's house surviving.”

Related: The US Forest Service is being overwhelmed by all the fires it must fight

“We're not going to [eliminate] these fires from the landscape,” he adds. “First of all, that would not be possible, and secondly, for many of the vegetation types, fires are a normal part of the ecosystem process. But there are things we can do to further decrease our vulnerability. I’m not saying they're cheap and I'm not saying that people are going to like them, but I think we really have to look at that hard now.”