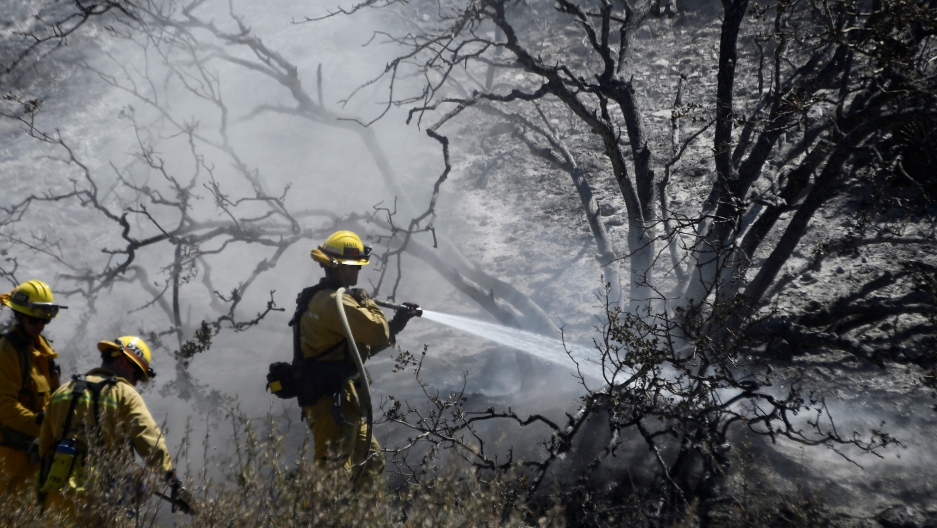 Wildfires are scorching tens of thousands of acres out west — there are currently six fires in Yellowstone National Park, and nearly a dozen fires are actively burning in the state of California. The Blue Cut Fire outside of Los Angeles is now more than 80 percent contained, and the 82,000 people who were displaced by the blaze can now return home.

The US Forest Service, which is part of the US Department of Agriculture, was established to manage America's 193 million acres of national forests and grasslands. However, in recent years, a large amount of effort and money has gone into fighting fires, not preserving the land. According to a 2015 fire budget report from the USDA, as wildfires increased over the last two decades, cost diversions have taken a toll on recreation, restoration and other activities.

It's a problem that Agriculture Secretary Tom Vilsack and others have been urging Congress to address, says Robert Bonnie, under secretary for natural resources and environment at the USDA. He oversees the US Forest Service and Natural Resources Conservation Service, and says the issue is growing worse.

“Our fire seasons are about about 78 days longer than they were three decades ago,” Bonnie says. “We’re burning about twice as many acres as we used to, and the fires that we’re seeing are bigger and more catastrophic. The challenge is enormous, and the budget implications of that are significant.”

Bonnie says that there is “no question” that climate change is having an impact on both the fire season and the intensity of the fires themselves. Other factors also play a role — the number of small fires that used to occur and clear out underbrush have been reduced, which is now providing more fuel to large scale fires, and human life is also having an impact.

“We’ve also built a lot of houses along the edges of forests — what we call the ‘wildland-urban interface’ — and that too has created substantial challenges,” he says.

Every year, the US Forest Service is allocating more and more of its budget to wildfires — money intended to reduce the likelihood of wildfires is actually being used to fight them. Last year, about 60 percent of the forest service budget went to fighting fires.

“That short changes all of the other things we need to spend money on, including forest restoration and management, which would allow us to do work in the woods to reduce the severity of fires in the first place,” Bonnie says.

Those at the US Forest Service believe it’s time to systematically change the way that the agency is budgeted. But a cultural change is also needed.

Yet, with so much gridlock in Washington, does Bonnie really believe lawmakers will act?

“I’m optimistic that over the long term we’ll get this done,” he says. “The challenge is we need to get this done now, and Congress needs to act now, because the longer we wait the more expensive the problem gets, and the more firefighter lives, houses, and people's lives we put at risk. I’m optimistic that over the long term Congress will act, but we need them to act now.”