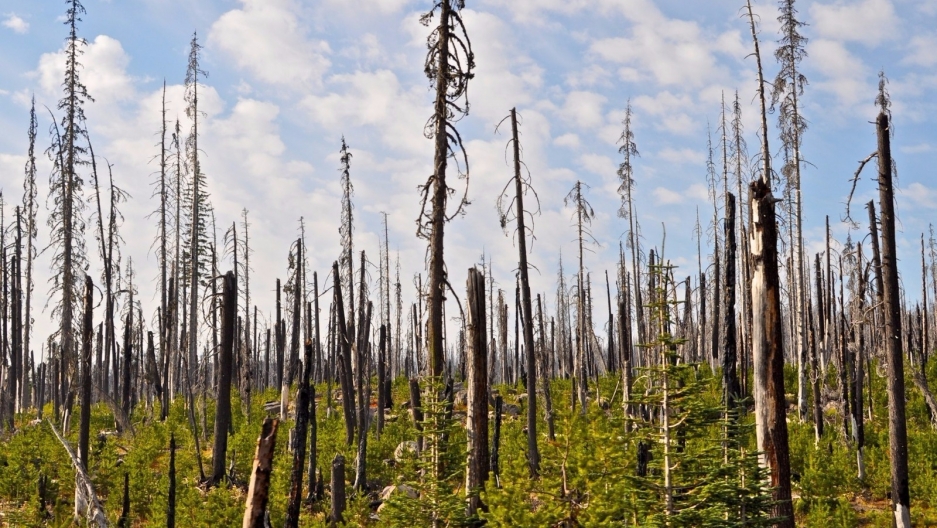 Massive forest fires can often result in a shifting of ecosystems as regeneration becomes a more difficult task — especially in drier and warmer areas.

These days it is hard not hear about the latest massive wildfires that have ravaged Southern California. The Thomas fire, in particular, has now become the largest of its kind in the state’s history after destroying more than 280,000 acres and thousands of homes and buildings.

While a warming climate and the record drought that the state suffered from 2012 to 2015 certainly appear to be major culprits for the rash of monstrous blazes, the human/urban component may shoulder the biggest blame, according to new research.

“Humans can alter fire patterns in a whole range of ways, but the clear signal is that when there are a lot of humans present, it can scramble the relationships between fire and climate,” says Alexandra Syphard, a senior research scientist at the Conservation Biology Institute in Corvallis, Oregon.

Syphard and her colleagues recently published their findings in Proceedings of the National Academy of Sciences after studying 37 different regions across the contiguous US to try to gain a better understanding of climate activity controlled variation in annual area burned for the different regions. It turned out that although climate change may be an important factor for fires in certain areas, it was not an across-the-board reason.

“The only factor we've found to significantly explain this difference in regions was the presence of humans,” Syphard says.

She credits a significant portion of the “anomalously large impacts of fire” to the trend of building more homes near flammable wildland areas.

The Frank Church-River of No Return Wilderness in central Idaho, where there are few surviving trees in a much-changed landscape.

“One of my favorite quotes came from Roger Kennedy from the National Park Service who said, ‘The problem isn’t fires. The problem is people in the wrong places,’” Syphard says of the former NPS director during the Clinton administration. “So I think it's important to start factoring this into our conversations about policy and thinking about ways that we could potentially manage development patterns, or in some cases prevent ignitions which are ultimately the start of all the fires.”

When the Thomas fire broke out, Syphard was in a workshop with a group of fellow scientists and ecologists to discuss the issue of post-fire rebuilding in relation to having incentives and disincentives for the placement of developments — and the likelihood of having another fire in that location — similar to how a floodplain works in the eyes of an insurance company.

“I think there are a few challenges and I think that there's a lot of information we still need to collect because we can't start telling people where to place their homes unless we really know for sure the best places to put them,” Syphard says. “So there’s a lot of work yet to be done, but there are also some really obvious places. If you put your house on a ridge in a wildland area, you’ve automatically increased the probability that if your home has a fire near it, it will be exposed to that fire.”

Camille Stevens-Rumann, an assistant professor of forest and rangeland stewardship at Colorado State University, also was part of a similar study that looked at the effects that climate change has had in declining forest resilience when it comes to trying to rebuild the forests at 1,485 sites in the Rocky Mountains after being hit by a collective 52 wildfires. Her team’s findings were recently published in Ecology Letters. 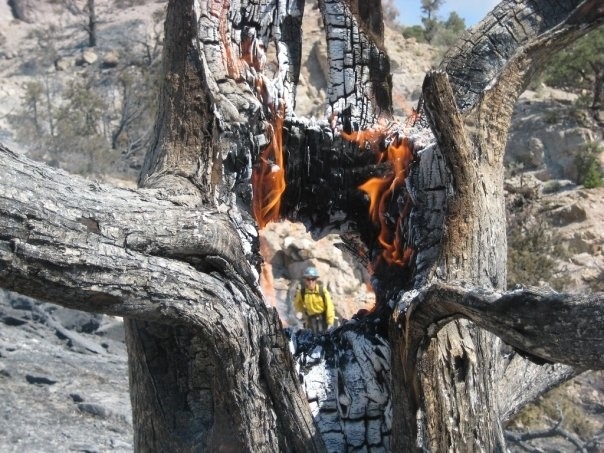 A portrait of Camille Stevens-Rumann, as seen through a charred tree, taken while on a fire crew in Nevada.

“I think the urban interface is always a concern both from a firefighting perspective but also an ecological perspective,” says Stevens-Rumann, who is a former wildland firefighter and the corresponding author of the academic paper.

Stevens-Rumann and her colleagues found a connection between the hotter and drier conditions that have been present since 2000 and a decrease in regeneration density as well as the overall success of regeneration efforts. Thirty percent of the sites studied had no seedlings, compared to about 15 percent during the cooler, drier period that took place at the end of the 20th century, she says.

The two biggest factors that emerged from her research were the average climate at the site and the distance that an area was from a living tree that could supply the needed seedlings. As a result, grasslands are replacing many fire-damaged forests in the Rockies.

As for the recent fires in Southern California, there is a shared concern that the native chaparral shrubland vegetation that inhabits most of the areas affected by the fires may share the same fate of extinction.

“It’s [being] replaced by flammable grasses that are even more flammable and thus facilitating this feedback,” Syphard says of the chaparral.

One of the big takeaways from Stevens-Rumann’s work centered on the importance of a centralized plan of action when it comes to managing lands through such means as initiating prescribed fire and fuel treatments under less extreme conditions — and then establishing plans for landscape management after a forest fire.

“It's [about] just overcoming those monetary and personnel hurdles to both communicating that science and having better-informed communities and better-prepared communities, but also instituting those management actions,” Stevens-Rumann says.

Those actions, though, cannot be a “one-size-fits-all management strategy,” as Syphard puts it, but one custom tailored for a particular area.

“There’s so much geographical variation in all of these different factors that not only control fire activity, but also control the impacts of fires to ecological and human systems,” Syphard says. “This needs to also be part of the discussion in terms of both management and policy and knowing where and when to apply the appropriate strategies.”