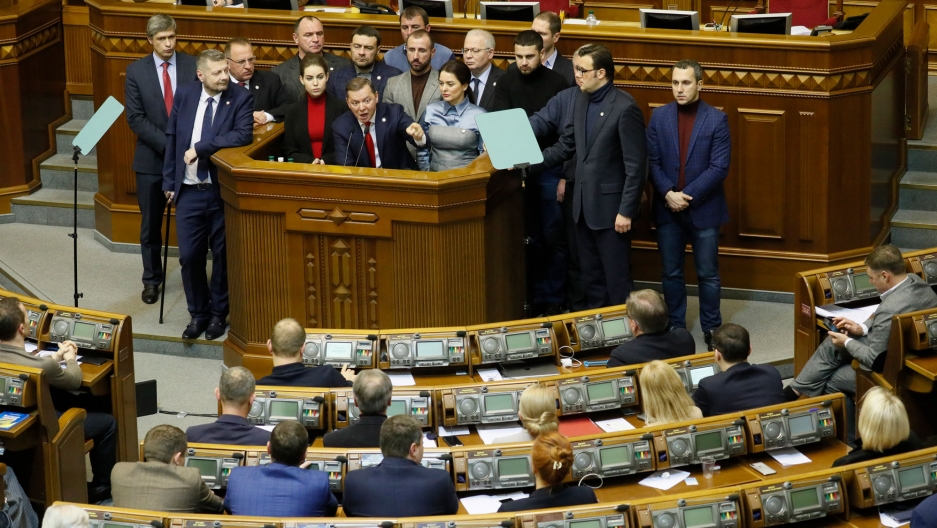 Ukraine President Petro Poroshenko has imposed martial law for 30 days in parts of the country after Russia seized three Ukrainian naval ships and took their crew prisoner over the weekend.

Poroshenko warned of an "extremely serious" threat of a land invasion from Russia.

US President Donald Trump said he did not like what was happening between Russia and Ukraine and was working with European leaders on the situation.

US Secretary of State Mike Pompeo called Russia's seizure of the Ukrainian vessels "a dangerous escalation and a violation of international law" and called for restraint from both countries.

"The United States condemns this aggressive Russian action. We call on Russia to return to Ukraine its vessels and detained crew members, and to respect Ukraine’s sovereignty and territorial integrity," Pompeo said in a statement.

The State Department said Pompeo spoke by phone with Poroshenko and reiterated strong US support for Ukraine’s sovereignty and territorial integrity in the face of Russian "aggression."

The Ukrainian parliament approved the introduction of martial law after Poroshenko reassured some skeptical lawmakers that it would not be used to curb civil liberties or delay elections scheduled for next year.

It came at the end of a day when Ukraine and Russia traded accusations about Sunday's standoff and Kiev's allies weighed in to condemn Moscow's behavior. 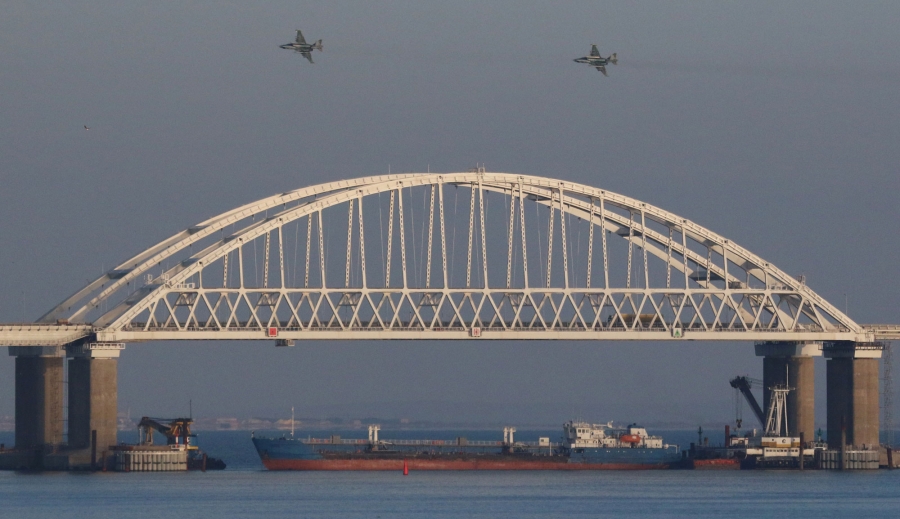 Russian jet fighters fly over a bridge connecting the Russian mainland with the Crimean Peninsula with a cargo ship beneath it after three Ukrainian navy vessels were stopped by Russia from entering the Sea of Azov via the Kerch Strait in the Black Sea, Crimea, Nov. 25, 2018.

With relations still raw after Russia's 2014 annexation of Crimea from Ukraine and its backing for a pro-Moscow insurgency in eastern Ukraine, the crisis risked pushing the two countries into open conflict.

"Russia has been waging a hybrid war against our country for a fifth year. But with an attack on Ukrainian military boats it moved to a new stage of aggression," Poroshenko said.

In a phone call with Poroshenko, NATO Secretary General Jens Stoltenberg offered the alliance's "full support for Ukraine's territorial integrity and sovereignty." Ukraine is not a NATO member though it aspires to membership.

Washington's envoy to the United Nations, Nikki Haley, said Russia's actions were an "outrageous violation of sovereign Ukrainian territory" and sanctions on Russia would remain in place.

The stand-off in the Azov Sea is more combustible now than at any time in the past four years as Ukraine has rebuilt its armed forces, previously in disarray, and has a new generation of commanders who are confident and have a point to prove.

"It's obvious that this painstakingly thought-through and planned provocation was aimed at igniting another source of tension in the region in order to create a pretext to ramp up sanctions against Russia," it said in a statement.

Such a policy was "fraught with serious consequences," it said, adding that Kiev was acting in coordination with the United States and the European Union.

Russia summoned the ranking diplomat at Kiev's embassy in Moscow over the incident, the foreign ministry said.

In Kiev, Poroshenko said intelligence data suggested there was an "extremely serious threat" of a land-based operation against Ukraine by Russia.

"I have a document of intelligence in my hands ... Here on several pages is a detailed description of all the forces of the enemy located at a distance of literally several dozens of kilometers from our border. Ready at any moment for an immediate invasion of Ukraine," he said.

Martial law would allow Ukraine to respond swiftly to any invasion and mobilize resources as quickly as possible, he said.

He dismissed "dirty speculation" by critics that he wanted to use the proposed measure to delay elections next year, where he faces a tough re-election fight and opinion polls show him trailing his opponents. Ukrainian lawmakers held a second vote to confirm the polls would take place as scheduled on March 31.

Russia's rouble currency weakened 1.4 percent against the dollar in Moscow on Monday, its biggest one-day fall since Nov. 9, while Russian dollar-bonds fell.

Markets are highly sensitive to anything that could trigger new Western sanctions, and therefore weaken the Russian economy. A fall in the price of oil — Russia's biggest source of revenue — has made its economy more vulnerable.

The Ukrainian vessels had been trying to enter the Sea of Azov from the Black Sea via the narrow Kerch Strait that separates Crimea from the Russian mainland.

Interfax news agency quoted Russia's human rights commissioner, Tatyana Moskalkova, as saying on Monday that 24  Ukrainian sailors were being detained. Three of the sailors were wounded but were not in a serious condition and were recovering in hospital.

A Reuters witness in Kerch, a port in Crimea, said the three Ukrainian vessels were being held there on Monday.

Domestic politics in Moscow also add to the combustibility of the situation.

Russian President Vladimir Putin has seen his high approval rating fall because of unpopular domestic policies. In the past, successful military action beyond Russia's borders has buoyed his popularity.

By Andrew Osborn and Natalia Zinets/Reuters