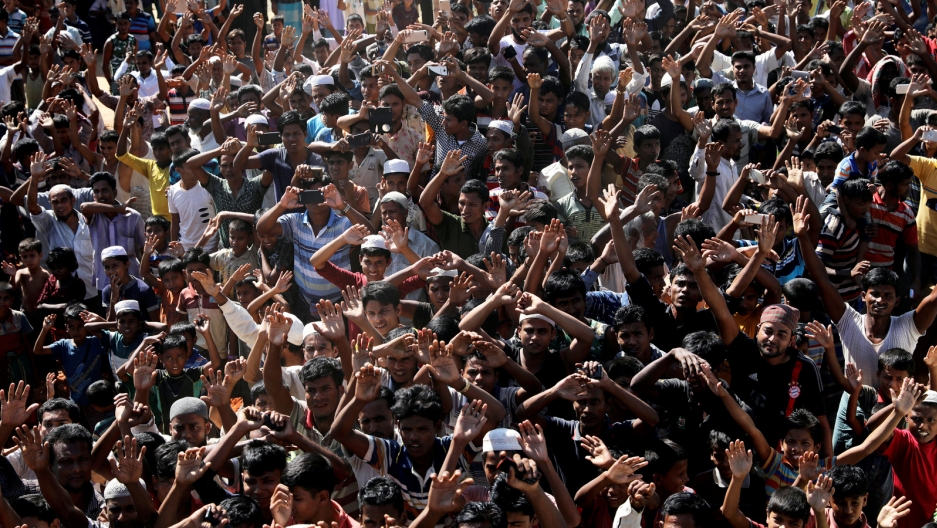 Hundreds of Rohingya refugees shout slogans as they protest against their repatriation at the Unchiprang camp in Teknaf, Bangladesh, Nov. 15, 2018.

Bangladesh's plans to tackle the Rohingya refugee crisis are set to be stalled until the new year with repatriation and relocation programs only likely to be revisited after year-end general elections, a top Bangladeshi official said on Sunday.

Abul Kalam, Bangladesh's refugee relief and repatriation commissioner, told Reuters "a new course of action" needed to be adopted on repatriation that took into account refugees' key demands. He later clarified these were his own personal views and not those of the government.

More than 720,000 Rohingya fled a sweeping army crackdown in Myanmar's Rakhine state in 2017, according to UN agencies. The crackdown was launched in response to insurgent Rohingya attacks on security forces.

Rohingya refugees say soldiers and Buddhist civilians killed families, burned many villages and carried out gang rapes. UN-mandated investigators have accused Myanmar's army of "genocidal intent" and ethnic cleansing. Myanmar has denied almost all the accusations, saying its forces engaged in a counter-insurgency operation against "terrorists".

In late October, Bangladesh and Myanmar agreed to begin to repatriate hundreds of thousands of Rohingya Muslim refugees who fled, but the plan has been opposed by the Rohingya refugees in Bangladesh and the UN refugee agency and aid groups, who fear for the safety of Rohingya in Myanmar.

The repatriation of the first group of 2,200 refugees was to begin officially on Nov. 15, but it stalled amid protests at the refugee camps. None of those on the list agreed to return if their demands for justice, citizenship and the ability to go back to their original villages and lands were not met.

"I don't think anyone's agreeing to go back without these," said Kalam, who last week called on the international community to pressure Myanmar to accept certain "logical and acceptable" demands in order for any repatriation to take place.

Myanmar does not consider the Rohingya a native ethnic group and calls them "Bengalis," suggesting they belong in Bangladesh. It has agreed to take the Rohingya back and said they would need to accept the National Verification Card, which it says would allow Rohingya to apply for citizenship. The Rohingya reject the card, saying it brands them as foreigners.

Kalam said he believed Myanmar needed to propose a "clearer path" to citizenship for the Rohingya if any returns were to take place, adding he would raise the matter at the next bilateral meeting on repatriation, likely to take place next month.

Myanmar government spokesman Zaw Htay was not reachable on Sunday for comment.

With Bangladesh now set to go to the polls on Dec. 30, any decision either to repatriate people or relocate refugees from the crowded camps to Bangladesh's Bhasan Char island will not proceed until 2019, Kalam said, adding later a final decision had not been taken and it would be the government's call.

"Elections are coming up now, so the government will only finalize a future course of action after the elections," said Kalam.

Bangladesh has vowed not to force anyone to return and has asked the UN High Commissioner for Refugees (UNHCR) to ensure those short-listed to return really want to go back.

A UNHCR spokesman said it was not clear when repatriations could begin. "At this moment it's unclear, perhaps we can get clarity in the next few days."

Some Rohingya refugee leaders in Bangladesh said they were relieved Bangladesh had not forced refugees to return and called for the repatriation plan to be revised.

Kalam said construction work on alternative housing on Bhasan Char was "nearly complete." He said he was hopeful some refugees would agree to move, given the island's "livelihood opportunities" such as fishing and farming. Aid agencies express caution as the island is prone to flooding.

"The possibility of refugees being relocated to the island until elections are over is slim," Kalam later added.