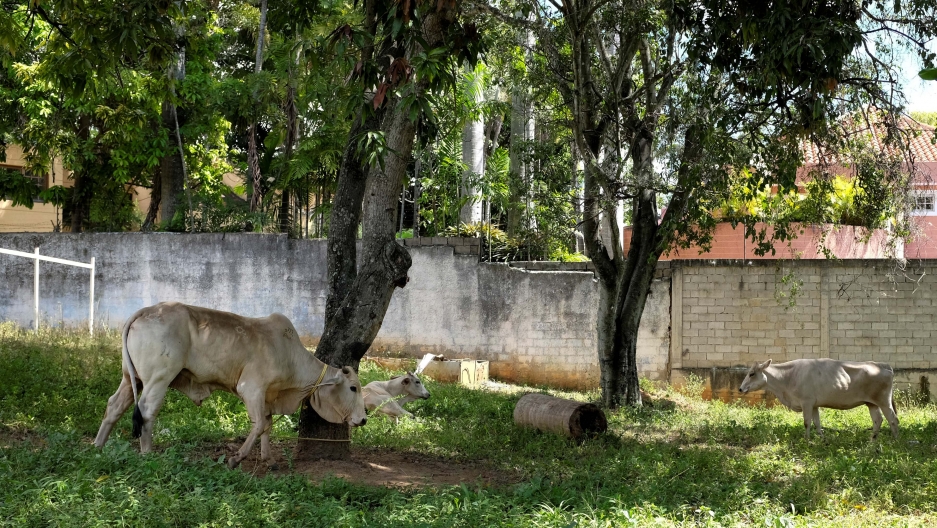 Cattle graze in the backyard of a house occupied by the Apacuana commune in Caracas, Venezuela, Nov. 13, 2018.

A socialist commune has drawn the ire of its neighbors in a wealthy area of Caracas with an unusual response to the hyperinflation and food shortages afflicting Venezuela: turning its backyard into an urban cattle pasture.

The leaders of the Apacuana commune, devotees of socialist President Nicolas Maduro, drove six hours to purchase 11 almost 1,000-pound cows. They set them to graze behind their over 21,000 square-foot home, donated by the state-owned telecommunications company two years ago.

The government began transferring billions of dollars to a network of more than 70,000 such community groups under the administration of late President Hugo Chavez, who supported the communes as an alternative to a capitalist economic model. Maduro has called communes "the epicenter of solidarity."

Leaders of the commune, who also grow fruits and vegetables, say the arrangement is simply a way to get cheaper meat. They do not graze the cattle for long, and have already slaughtered several inside their home.

With Venezuela's oil-reliant economy in a fifth year of recession and inflation nearing 1 million percent, securing staple goods is a daily struggle for many.

Just 40 percent of families can afford beef and nearly two-thirds of the population reported losing weight last year, by nearly 25 pounds on average, according to a study by three universities.

Western economists and the domestic opposition blame Maduro's heavy-handed policies and economic mismanagement for the crisis. However, the government and its supporters attribute Venezuela's struggles to US sanctions and hoarding by businesses trying to undermine socialism.

"This experience shows the resolve of the people to push back against the economic war," said commune leader Sulimar Pedrozar, as two cow heads boiled in a pot over a wood fire and a group cleaned out a cow stomach for a soup. 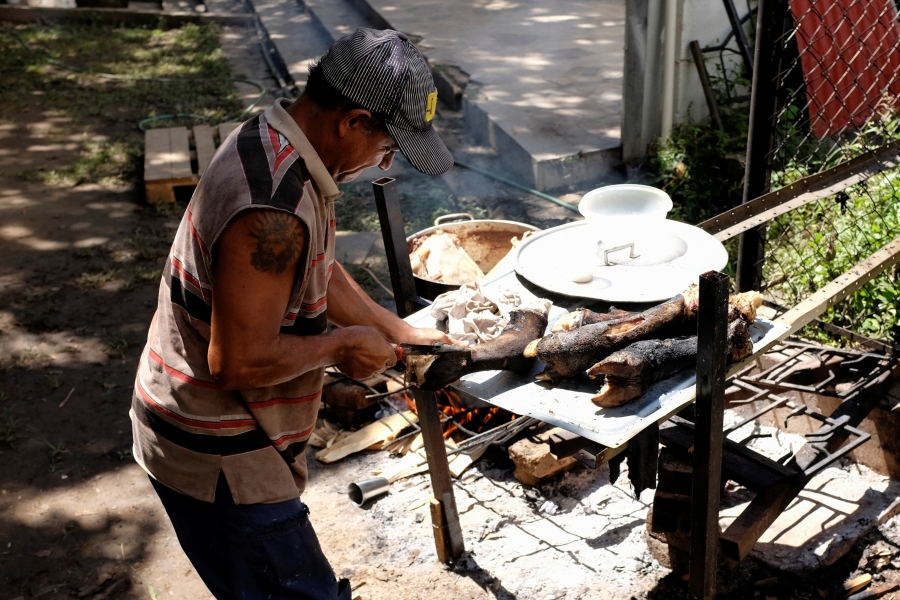 A man cooks cow feet in the backyard of a house occupied by the Apacuana commune in Caracas, Venezuela, Nov. 13, 2018.

The group has slaughtered seven cows and sold a small amount of meat to several hundred people at 560 bolivars per kilo, or about $2 at the black market exchange rate.

That was well above the government-set price of 90 bolivars. But with supply scarce, many butchers in Caracas sell beef for more than 10 times that amount, or more than half a monthly salary at the official minimum wage.

In 2016, Maduro launched a "Great Agro-Venezuela Mission" to encourage city-dwellers to grow fruits, vegetables and herbs in their backyards, noting that he and his wife harvested pumpkins on their patio. Earlier this year, a government minister said people should breed and eat rabbits, arguing they are not just "cute pets."

On Thursday evening, several dozen neighbors of the commune gathered to protest the ranch next door, complaining about the foul smell, flies, and health risks.

"It is the first time in my life I've seen cattle being raised in a house," said Luisa Ferro, a resident of the Los Chorros neighborhood. "You see stuff like that in the country, but never in a city."

Pedro Méndez, a local opposition leader, said he would report the urban ranch to Venezuela's health ministry, but doubted the government would stop it given Maduro's support for such communes.

"There is resistance to this idea but those who want to let people die of hunger are crazier," Pedroza said.