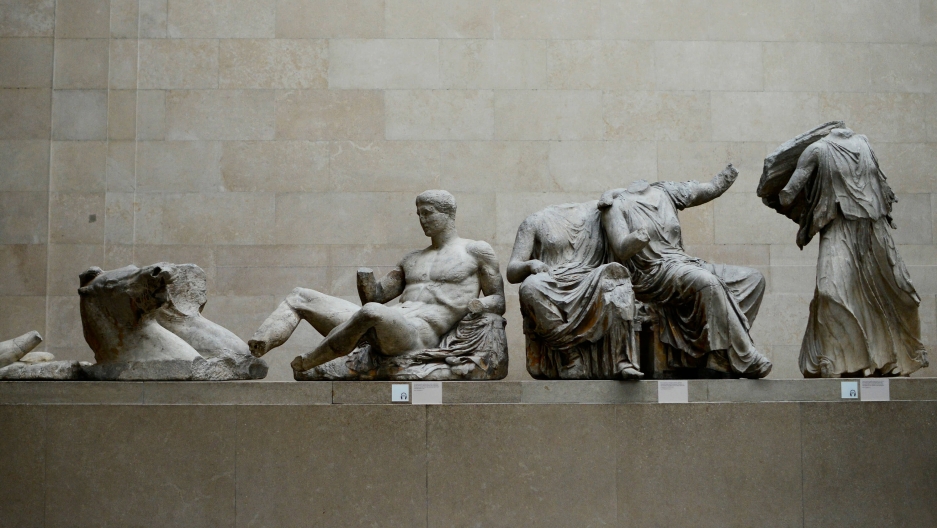 The Parthenon Marbles, a collection of stone objects, inscriptions and sculptures, are displayed at the British Museum in London Oct. 16, 2014. Human rights lawyer Amal Alamuddin Clooney made an impassioned plea on for the return of the Parthenon Marbles to Athens, in what Greeks hope may inject new energy into their national campaign.

What would you do if you lost something that you really, really wanted back, and then fate handed you a way to get it? As Europe faces Brexit, that’s the question facing Greece.

More than 200 years ago, the British ambassador to the Ottoman Empire took a large part of the decorative marble sculptures and architecture off of the outside of the Parthenon, the most famous temple of ancient Athens, and brought them to London, where they now sit in the British Museum. For nearly 200 years Greece has been asking for them back, to no avail.

But as the European Union prepares to negotiate a whole new relationship with the UK post-Brexit, Greece might be able to make the United Kingdom an offer it can’t refuse.

“What we have now is the only opportunity in 200 years to force the return of the Parthenon Marbles,” says Alexis Mantheakis, co-founder of the activist group International Parthenon Sculptures Action Committee.

The world is focused on the divorce agreement that the UK will make with the EU, but that’s only the beginning. Once the UK Brexits the EU at the end of March, the negotiations start all over again, over trade, security and the rest of the future relationship.

The treaties that come out of those negotiations will almost certainly have to be ratified by all 27 remaining EU parliaments before they can take effect. If Greece’s parliament — or any other, for that matter — refuses, there’s no deal.

“There is no blackmail. This is political bargaining. I mean Britain’s doing it right now with Brexit, they’re doing it all over the place,” says Mantheakis. “When you want something, you put on pressure.”

Past EU trade deals have been held up by objections from national parliaments including Italy and Greece and Belgium’s Walloons, says Piet Eeckhout, professor of EU law and dean of the faculty of laws at University College London, although the ransom demands in the past have had to do with the text of the treaties themselves, not side issues. But they don’t have to.

“Nothing prevents any member state from saying, ‘this is a really significant issue, and we’re not willing to just march along unless this is settled as well,’” he says.

For many Greeks, the Parthenon Marbles are a deeply symbolic link to their history.

“What does Shakespeare mean to England? St. Paul’s cathedral?” asked the late Greek actress and culture minister Melina Mercouri in 1982, when she launched the modern campaign for the sculptures’ return. “The Parthenon marbles are our pride. They are our identity.”

Supporters of the sculptures’ repatriation — who include British comedian Stephen Fry, British lawyer Amal Clooney and the late British journalist and author Christopher Hitchens — say the British peer who took the marbles did so without proper permission. The UK says no laws were broken, and maintain that the sculptures are rightly the property of the British Museum. Opinion polls show the British people generally support the marbles’ return to Greece.

But Marlen Godwin of the campaign group British Committee for the Reunification of the Parthenon Marbles says using Brexit to force the issue is “mixing apples and pears.” Brexit, she says, is complicated enough already.

“There’s not that many months to go and there’s still no answers,” she says. “So I don’t think that the bargaining chip of a peerless work of art that is the sculptures from the Parthenon is going to really make any difference to that trade agreement whatsoever.”

Greece has the power to throw a wrench into that post-Brexit machine. What’s unclear is if it has the nerve to use it.

Simon Usherwood, deputy director of the independent think tank UK In a Changing Europe, thinks, probably not. He says no matter how much Greece wants the Parthenon Marbles back, it’s likely to care about its relationship with the EU more.

“Let’s just imagine that everyone else signs off on this deal and then it’s just the Greeks holding out because they want the marbles,” he says. “I think there would be a lot of internal pressure in the EU on Greece to say, 'you can’t hold this process up for this side issue.'”

After all, it was only a few years ago, during the Greek financial crisis, that voices in the EU were calling loudly for Greece’s own Grexit. Greece is out of the doghouse now, and Usherwood doubts it wants to risk going back.

Related: The long-feared 'Grexit' could soon become a reality

“Greek politicians are likely to be more concerned about using this as an opportunity to demonstrate that they can be constructive members of the EU, after a very difficult relationship that they have had over the past decade or more since the financial crisis,” he says.

But if Greece indeed decides not to pull the trigger, Brexit might still offer repatriation campaigners one last hope: a change of leadership.

Should the Conservative government lose power to the Labor opposition, Labor leader Jeremy Corbyn has said when he’s prime minister, he’ll talk to Greece about sending the Parthenon Marbles back home.