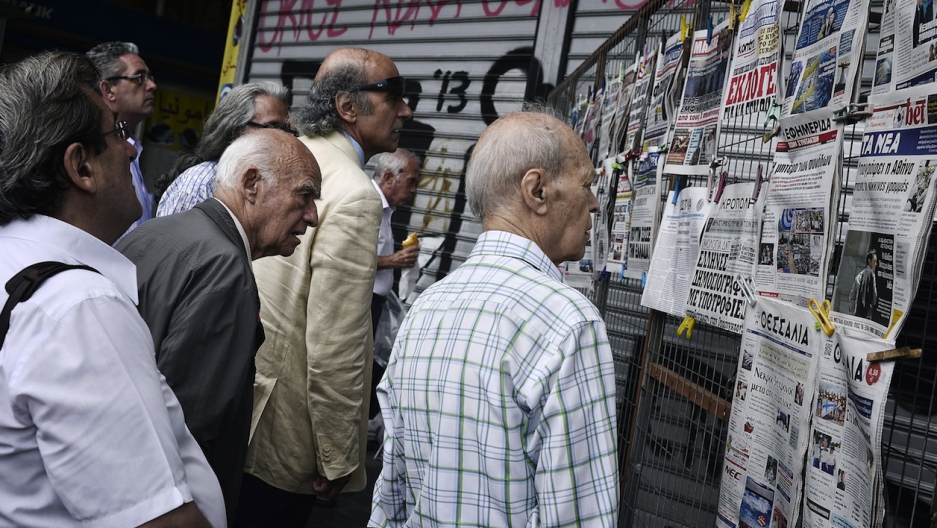 It's make-or-break time for the dysfunctional marriage between Greece and the EU. Over the weekend, Greece's prime minister made a last-ditch proposal to European creditors to keep the country afloat. But the possibility of a messy divorce still looms.

Mutual resentment between the debt-saddled Greeks and the northern and central European countries that are paying to prop them up has surged. Greeks hate the austerity measures they're living under, but need billions over the next six months to stay out of bankruptcy. The rest of the euro zone is fed up with endlessly bailing out a country that's widely stereotyped as work-shy and full of tax dodgers.

Months of stalemate reach a climax today, as officials from the IMF and the euro zone meet at an emergency summit to consider the deal. Just last week hard-left Prime Minister Alexis Tsipras told his supporters in Athens that the IMF has "criminal responsibility" for Greece's economic woes. But mainstream politicians see Tsipras' confrontation with the rest of the euro zone as threatening their tentative recoveries after years of austerity. On the table now are tax increases and pension cuts that are less than creditors asked for. Greece desperately needs the money to avoid defaulting on a 1.54 billion euro loan due to be repaid June 30. Signs for a deal are positive so far, but if neither side blinks, the long-feared "Grexit" could soon become a reality.

As Scientology has become a punchline in the US, the land of its birth and longtime stronghold, it has sought to expand overseas. Teams of Scientology faith-healers have appeared at disaster areas in Burma, performing miraculous "touch assists" on wounded victims. They have popped up in earthquake-ravaged villages in Nepal.

And in South Africa, they have a museum-cum-shrine in the restored home where founder L. Ron Hubbard lived for six months during his African sojourn. GlobalPost Senior Correspondent Erin Conway-Smith, who is based in Johannesburg, takes us behind the scenes to the house where Hubbard "discovered" Scientology's toughest interrogation techniques. Check out LRH's vintage '70s zebra-skin rug here.

For many marine activists, interrogation would be too kind a fate for two men filmed "surfing" on the back of an endangered whale shark. In the clip, the men — believed to be frolicking somewhere off the coast of Venezuela — pump their fists in triumph as they heroically stand for a few seconds on top of the toothless, gentle giant.

The London-based animal activists who published the video are calling for the men to be charged for the "stupid stunt." Beyond the indignity of being ridden like a wakeboard, whale sharks elsewhere in the world have had their natural feeding patterns disrupted by Philippines tourist groups and have been slaughtered by the hundreds in South China processing plants. What's the ocean's nicest, biggest fish gotta do to get a little respect?