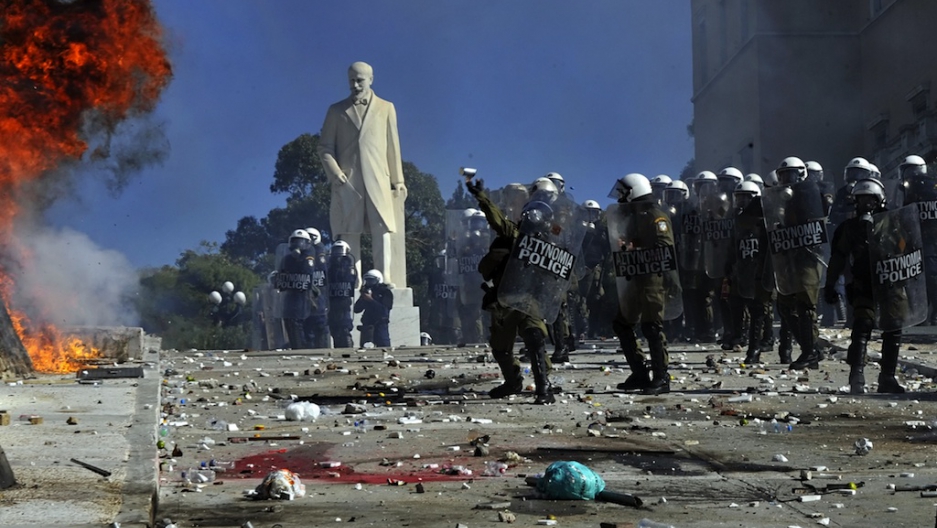 The protests turned violent early as protesters fight with riot police during massive clashes in front of the Greek parliament on Oct. 19, 2011.
Credit: Louisa Gouliamaki
Share

Greek archaeologists are warning the public that austerity cuts have threatened the future of Greek antiquities. In a commercial produced by the Association of Greek Archaeologists, a little girl is standing in a museum when a kidnapper suddenly puts his hand over her mouth. In the next scene, the girl remains standing in the museum, but the statue she had been staring at is now gone. "No future without past," the advertisement warns. “Monuments have no voice. They must have yours."

The commercial is part of a long campaign by Greek archaeologists, who warn that austerity cuts are threatening Greece's museums and its ancient artifacts, the New York Times reported.

For example, austerity cuts have lead to decreased staff working at museums. In February, only one guard was on duty at an antiquities museum in Ancient Olympia. He was unable to fight off a group of robbers, who tied him up, gagged him and then stole dozens of rare artifacts, the Daily Telegraph reported.

But austerity cuts are also threatening antiquities in less obvious ways. For example, archaeology had been long viewed as a respectable profession in Greece, but now the nation's top archaeologists are being forced into early retirement. In addition, government budget cuts have also made it more difficult for young, aspiring archaeologists to find work, the Times reported today. And many historical sites where artifacts are being discovered are no longer being dug up.

"We don't want our museums to become storerooms," Despina Koutsoumba, head of the Greek Archaeologists' Association, told MSNBC during a protest. "What happened here will happen to other countries, too."