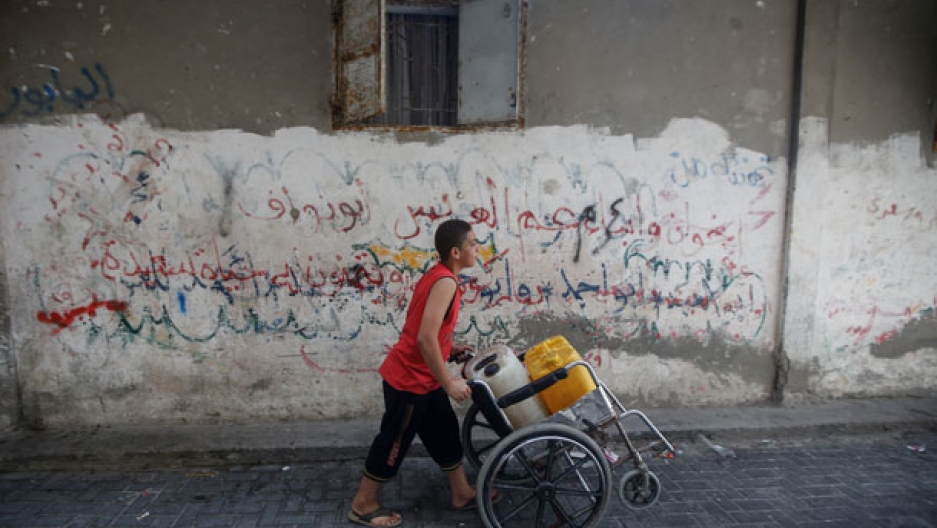 In the Middle East's Gaza Strip, a narrow piece of contested land where three out of four people are refugees, unsafe drinking water has led to a worsening health crisis. Gazan children suffer from diarrhea, kidney disease, stunted growth and impaired IQ.

Twenty years ago, 85 percent of Gaza’s drinking wells were too contaminated for human consumption. Today, that figure is 97 percent.

Local tap water is too salty to drink because the aquifer below Gaza has been over-pumped so severely that seawater is flowing in. Two-thirds of Gazans get water delivered by truck. Desalinated water is pumped into rooftop tanks via hoses. But the desalinated water is unregulated and because this water has virtually no salt, it’s prone to fecal contamination. When children drink this water, they get diarrhea.

Repeated bouts of diarrhea can lead to stunting and developmental problems, including a measurable impact on IQ. Late last year a British medical journal found an “alarming magnitude” of stunting among Gazan children. 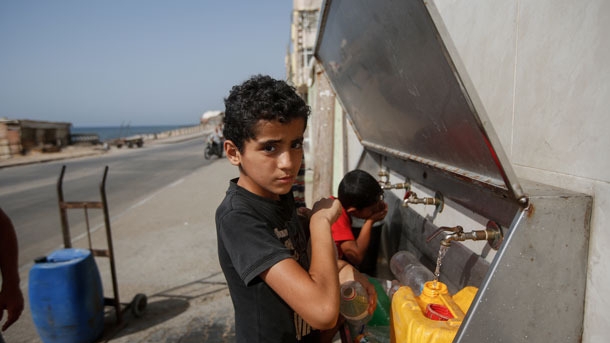 Children drink and fill water jugs at a mosque in Gaza City.

“If you really want to change the lives of people, you have to solve the water issue first,” says Adnan Abu Hasna, a spokesperson for UNRWA, the UN agency for Palestinian refugees. “Otherwise, you will see a huge collapse of everything in Gaza.”

“It's a ticking time bomb,” agrees Gidon Bromberg, director of EcoPeace Middle East, based in Tel Aviv. “We have a situation where two million people no longer have access to potable groundwater. When people are drinking unhealthy water ... disease is a direct consequence. Should pandemic disease break out in Gaza, people will simply start moving to the fences of Israel and Egypt, and they won't be moving with stones or with rockets. They’ll be moving with empty buckets, desperately calling out for clean water.”

Assigning blame for the plight of Gazans is not exactly simple. Take the fact that only three percent of Gaza’s drinking water wells are actually drinkable. Is that because Gaza’s citrus farmers pumped too much? Or because Israeli agricultural settlers depleted a deep pocket of fresh water before they left Gaza in 2005? Or the simple fact that Gaza’s population quadrupled in a matter of weeks when towns and villages fell to Israel in 1948?

Food- and water-borne diseases have also been a concern — the power is shut off for 20 hours a day. Are Israel and Egypt to blame for withholding fuel deliveries? Or Israel, for bombing water and sewage infrastructure in Gaza during the 2014 war? Or the fight between Hamas and the Palestinian Authority, which deprives Gazans of critical medicines? Israel’s economic blockade of Gaza contributes to worsening poverty, skyrocketing unemployment and child malnutrition, according to several human rights groups.

A peace deal could have connected Gaza to the West Bank, where the vast Mountain Aquifer is big enough to end Gaza’s water crisis. As it is, there is no peace. The two Palestinian territories are splintered. And Israel has effective control over all the water.

Critics say Israel could solve the whole problem by simply implementing power lines into Gaza. But Israeli officials say they are already sending water to Gaza and to do more would be rewarding Gaza’s bad actors.

Related: Gaza now has a toxic 'biosphere of war' that no one can escape

“What's going on in Gaza is a real catastrophe,” says Ori Shor, spokesperson of the Israeli Water Authority. “The situation there is unbearable. But it's also frustrating, at least from our point of view, because it's a bit difficult to help someone who doesn't want to help themselves. The problem in Gaza is really that Hamas does nothing to try even to solve the problem.”

Shor says Israel is providing more than twice the amount of water they are obligated to provide based on current agreements. But that amount is just a fraction of the clean water Gazans need every day. 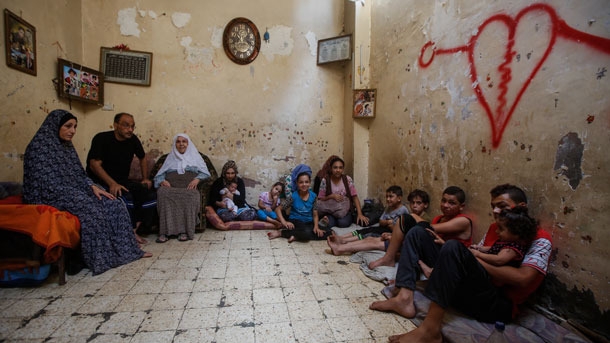 Fifteen members of the Nimnim family at home in the Beach refugee camp.

Related: The situation in Gaza is so desperate that some are predicting another war

As the situation in Gaza continues to deteriorate, humanitarian groups estimate that Gaza will become uninhabitable by 2020 — barely a year from now. To avoid that, international relief agencies and the Palestinian Water Authority are working on a network of big sewage and desalination plants.

Donors have pledged $500 million to build out this network. But one large obstacle remains: On most days, Gaza has electricity for only four hours, which makes running these projects almost impossible.

“At this time, we don’t have [enough electricity], but we hope,” says Kamal Abu Moammar, manager of the Southern Gaza Desalination Plant. “Many of our ministers say they will solve this problem. But we don't know when. Or how.”

This article is based on a report by Sandy Tolan reporting from the Gaza Strip that aired on PRI’s Living on Earth with Steve Curwood.