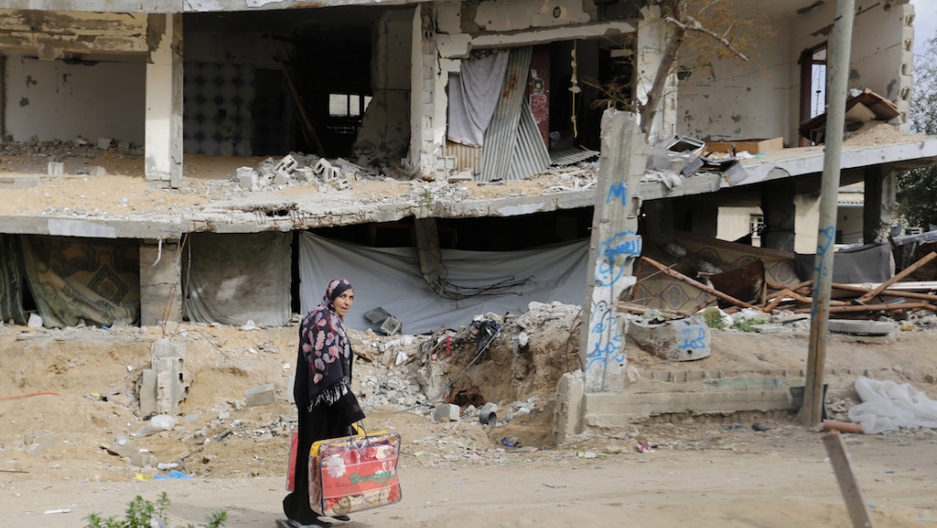 A Palestinian woman walks next to a building destroyed during last year's war between Israel and Hamas-led militants, in Gaza City's al-Shejaiya neighborhood.
Share

GAZA — It’s evening, and the neighborhood of Shejaiya is completely dark. Metal rods hang at odd angles off of crumbling skeletons of buildings, and occasionally the pale neon glow of an LED flashlight illuminates a face walking by.

More than 2,000 Gazans were killed during Israel’s Operation Protective Edge last year. The 51-day offensive flattened large swathes of the Gaza Strip and turned much of Shejaiya and other neighborhoods into ash-colored wastelands. More than seven months later, 100,000 people are still homeless.

Gaza still looks almost exactly as it did a week after the shelling ended. Only five percent of the $5.4 billion in aid pledged by international donors at a conference in Cairo last year has been disbursed — meaning aid agencies have had to cut services for destitute Gazans. The lack of funding has replaced access to construction materials as the main obstacle to rebuilding. Oxfam said last month that at the current rate, rebuilding Gaza would take more than a hundred years.

The sheer level of destruction in Gaza is hard to take in. Much of it is rubble. Children, undeterred by their surroundings, play in and around damaged buildings or collect pieces of their former homes to sell to factory owners. The living situation is so bad that many warn another round of fighting is inevitable.

More than 120,000 homes were damaged or destroyed during the summer offensive. Moussa Mohamed Hamdeya’s was one of them.

“When we left, we didn’t take money or clothes or anything,” says Hamdeya, 54. “When we came back we found that everything had been burned. Everything we’re wearing now was given to us by other people.”

Hamdeya and 11 other family members now live in a three-room structure with no windows.

Before the offensive he worked in construction, but the shelling destroyed his warehouse, and his livelihood along with it.

This month, after a funding shortfall of $585 billion, the United Nations' relief agency had to stop providing rent subsidies to homeless families and cash to those whose homes were partially destroyed, a move that affects about 80,000 people. If the payments do not resume, Hamdeya will be forced to move his family of 12 back into a UN school classroom where they lived until November of last year.

Children in Beit Hanoun collect bits of rubble to sell to factories in #Gaza. Much of the destruction from last summer's offensive remains and UNRWA has had to stop providing financial aid for families whose homes were destroyed to rent apartments and for home repairs.

“This time the shelling was random, the damage was random,” says Hajj Abdel Khalil el-Helou, whose house was badly shelled.

At 80, el-Helou lived through the formation of the State of Israel in 1948, attacks by the Israeli army in ’56, and the Six-Day War in ’67. Sometime in the mid-20th century his leg was blown off by an Israeli sniper. He and his wife cannot agree on exactly when. His house was shelled during each of the last three wars — but this time was different, he says.

El-Helou lost about 50 relatives in last summer’s offensive, including a family of 12, all of them killed in one house.

This time Israeli bombs flattened his shop as well. Now he has no money and no way to work.

“I do not think I will rebuild this time,” he says. When asked about what he thinks will happen in the future, he says, “God knows. No one can expect anything anymore. In Gaza there is no life. But our neighbor’s situation is worse than ours, God help them.”

Widespread homelessness is increasing the strain on families who are already struggling.

Hanadi al-Najjar, 30, contracted cancer after exposure to white phosphorus during the 2008-2009 Gaza offensive. Hers is one of hundreds of displaced families now living in Gulf-funded temporary shelters. Sick and homeless, she can no longer take care of her six children. She had to put them in an orphanage.

“We visit them whenever we can afford it,” she says. That’s usually about once or twice a month.

Electricity as a weapon

But even those who are still in their homes are facing extreme difficulties.

Six hours of electricity a day, sometimes less, is not enough to refrigerate food. Unable to store perishables for long, some Gazans are living from one meal to the next.

Gaza’s only power plant was bombed in 2006. It was hit again during last summer’s offensive. It began operating again at reduced capacity but stopped earlier this month because of a tax dispute between Hamas and the Palestinian Authority. The rest of Gaza’s electricity comes via cables from Israel and Egypt.

“Electricity is the mother of services,” says Jamal al-Dardasawy, spokesman for the Gaza Electricity Distribution Company. “They hit electricity and all the services stop.”

The main warehouse for materials to maintain the electrical grid was also hit.

“It’s all charcoal, even the cables turned to liquid,” says al-Dardasawy.

Even before the offensive, electricity in Gaza only arrived in eight-hour blocks, each followed by the same amount of time without.

“Israel uses electricity as a weapon,” he says. “The shells fall here and there, and not everyone dies, right? But all people feel the electricity crisis, from the small child to the old man.”

For al-Dardasawy it’s the little indignities that are the most painful; not the bread lines he saw in September, but the sight of an old man waiting for five hours for the electricity to come on so he can take the elevator to get up to his apartment.

Since the summer, many Gazans have struggled to access clean water and adequate sanitation.

Brushing your teeth with the briny stuff that flows from faucets here feels like gargling with seawater. When you drive down the coast, you can smell the 40 thousand cubic meters of untreated sewage gushing into the Mediterranean.

Much of the water infrastructure in the eastern Gaza Strip, near the border with Israel, was completely destroyed in the last offensive.

In Beit Hanoun, where once there were well-appointed houses and green farmland, there is now little but rubble. The US Agency for International Development and Mercy Corps, a US-based development organization, have set up a joint project to distribute fresh water.

Throughout the day residents line up at the pumps with plastic buckets, while schoolchildren stop by to drink from them like water fountains.

Maher al-Najjar, deputy general director of Gaza's Coastal Municipalities Water Utility, says that during the offensive his department gave the Israelis the coordinates of all water and wastewater facilities, hoping they would be spared during the air assault.

“But it seems they were targeting facilities without any restriction,” he says.

The water authority lost 12 staff members during the war. Under normal circumstances, repairs to the water system should take a year and a half. But al-Najjar says it is now so hard to acquire the materials it could take 20.

Many Gazans buy drinking water from private water tankers who have small desalination plants. Even the desalinated water is not very safe to drink.

The lack of electricity has brought commerce and manufacturing to a standstill.

Many farms were bombed during the war. Ibrahim Samarra, 47, is a farmer from the central Gaza Strip. He used to have 1,500 chickens.

“During the war they starved to death when we fled our homes,” he says. The area was too dangerous for him to come back and feed them.

Hatem Hassouna owned a group of factories in the Eastern Gaza Strip that made construction materials for UN projects. They were shelled during each of the last three offensives. Last summer the IDF used them as a base during the ground offensive. On the day the soldiers left, they razed the factories to the ground.

“There are no fighters in this area. I can think of no reason other than destroying the Gazan economy. One hundred and thirty people worked here,” Hassouna says.

Unemployment in Gaza doubled from around 108,000 in mid-2013 to over 200,000 in mid-2014. Because of the blockade imposed by Israel and Egypt since 2007, the Gazan economy is one of the most unstable in the world. Its unemployment and GDP per capita are comparable to those of Libya, Liberia or Sierra Leone.

The Israeli government says the blockade is necessary “because Hamas continues to declare its goal of killing Israelis” says Mark Regev, a spokesman for the prime minister’s office.

Meanwhile, in Israel, the word “Gaza” was hardly mentioned in the recent electoral campaign.

“In the past eight years there has been a steep drop in the willingness of Israelis to listen to Gazans,” says Sarit Michaeli, spokesperson for B’tselem, an Israeli human rights organization.

“There’s a lot of hatred. Israelis are afraid of tunnels and missiles,” she says. But most of the time, Gaza is out of sight, out of mind.

“Israelis can forget about Gaza as long as they’re not firing missiles.”