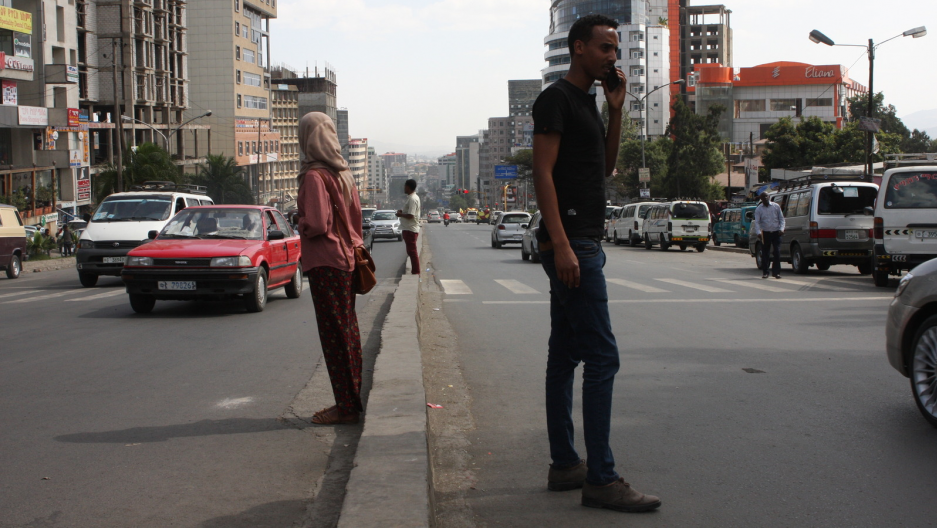 As the US shifts its focus away from terrorism toward political and economic threats, numerous squabbling Middle Eastern potentates are jockeying for power in the Horn of Africa, with Ethiopia playing a central role.

The new cold war brewing in the Gulf region has rapidly rewritten the geopolitical rule book in the Horn of Africa. As usual, US policy is playing a role, especially when it comes to its long-term ally Ethiopia, the Horn’s most powerful nation.

Since the 1991 revolution that brought Ethiopia’s present government to power, the US and the Ethiopian People’s Revolutionary Democratic Front (EPRDF) ruling party have forged a strong, bilateral relationship, primarily based on Ethiopia’s role in the global war on terror.

As the US shifts its focus away from terrorism toward political and economic threats, numerous squabbling Middle Eastern potentates are jockeying for power in the region. Saudi Arabia and the United Arab Emirates (UAE) versus their bitter adversaries, Qatar and Turkey — are looking to forge closer connections with Ethiopia.

This power play is motivated by the same forces that once had the old, imperial powers of Britain, France and Italy tussling over the Horn in their desire to control the Suez Canal, a vital shipping avenue. But the latest contest isn’t necessarily a bad thing: It could benefit the region’s benighted economies and has already achieved notable gains in terms of peace and stability, highlighted by the recent opening of the Ethiopia-Eritrea border after 20 years of animosity and conflict. But the sparring also has the potential to unleash dangerous forces in a politically volatile region.

“The peace between Ethiopia and Eritrea will have a significant dividend for the Horn of Africa,” said Hallelujah Lulie at Amani Africa, a policy research, advisory and consulting think tank.

“But at the same time, US policy is shifting; new powers are emerging; there are rivalries over the Red Sea and Yemen; in the background you have Iran, which is an enemy of Saudi, who is an ally of the US. It’s a complex battleground.”

The roots of a new cold war

The Gulf’s cold war began in 2017 when Saudi Arabia initiated an Arab blockade of Qatar. Soon after, Saudi Arabia, the UAE, Qatar and Turkey all descended on the Horn, building military bases, signing defense pacts and taking over commercial ports.

Ethiopia has been dealing with meddling foreigners for the past two centuries and has proven adept at playing them against each other and switching allegiances to suit itself. During the reign of Emperor Haile Selassie (1930-1974), Ethiopia forged strong ties with the US. But after a military coup overthrew the emperor in 1974, Ethiopia pivoted to Russia. After the next revolution in 1991, Ethiopia aligned again with the US. Since 2001, as the global war on terror intensified, the US regarded Ethiopia’s large, professional army as a vital ally.

In recent years, however, the US has gradually come to perceive the rise of China and Russia, and not terrorism, as its biggest threat in Africa and elsewhere.

"Great power competition, not terrorism, is now the primary focus of US national security,” US Secretary of Defense James Mattis said in a January speech outlining the 2018 National Defense Strategy.

“We face growing threats from revisionist powers as different as China and Russia are from each other.”

While US policy was shifting, the Ethiopian government has been belayed since 2015 by ongoing protests in the country, spearheaded by the Oromo, the largest ethnic group in Ethiopia, and later joined by the Amhara, the second-largest group — together, the two groups represent more than 60 percent of the population — as well as by internal squabbles within the EPRDF party. As a result, it took its eyes off the bigger picture outside Ethiopia, according to analyst Mehari Taddele Maru.

As a result, he says, the EPRDF failed to prepare itself for the implication — for one thing, Ethiopia continued to accept enormous Chinese investments in infrastructure and to forge economic and diplomatic ties between the two countries — and became “the unintended target of US policy shift from war on terror to economic confrontation with China.” With the US not offering the same steadfast, diplomatic support as before — including being less willing to look the other way over controversial practices by the Ethiopian government — the EPRDF became increasingly susceptible to its inner frictions and thereby less stable and sure of itself.

At the beginning of 2018, Prime Minister Hailemariam Desalegn resigned — the first Ethiopian leader to voluntarily cede power — in an effort to placate EPRDF criticisms and to calm the turmoil gripping the country. Abiy Ahmed was sworn in as the new prime minister on April 2, 2018.

A week after Abiy took office, the US House of Representatives unanimously adopted resolution HR-128, an unusually outspoken policy condemning a series of human rights abuses under the Ethiopian government.

The Ethiopian diaspora in the US has become increasingly effective in influencing US policy toward the motherland. “The new resolution is a reminder to the Ethiopian government that should it fail to reform, it can no longer rely on US largesse to contain problems at home,” said Hassen Hussein, an academic and writer based in Minnesota.

Since coming to power, Abiy has pushed through numerous reforms at blistering speed, releasing prisoners, inviting parties once deemed as terrorists back to Ethiopia, and easing restrictions on the press and free speech.

Arguably, Abiy’s greatest coup so far is the stunning and unforeseen rapprochement with Eritrea and the opening of formerly fractious and dangerous borders.

Here, too, US and outside influence was brought to bear.

China’s burgeoning presence in neighboring Djibouti is of increasing concern to the US, which has its African military headquarters in the coastal country. Eritrea could serve as a future alternative, but first it has to come out of diplomatic isolation, especially by normalizing relations with Ethiopia, analyst Mehari Taddele Maru says.

Hence the quiet diplomatic campaign last year, according to Mehari and others, involving church officials and US diplomats lobbying the two countries to come together and resolve their differences.

Meanwhile, Saudi Arabia has already established a military base in Eritrea to further its war efforts in Yemen; it is engaged in a vicious war against Iranian-backed Houthi rebels, and wants to expand its investment beyond Eritrea’s ports. This likely played a significant background role in brokering the deal, notes Hallelujah. Ethiopia is being drawn into the Saudi-UAE bloc. After becoming prime minister, Abiy’s first official visit outside Africa in May was to Saudi Arabia, and he has met with UAE’s rulers.

“States in the Horn such as Ethiopia are trying to leverage these rapidly changing geopolitical dynamics to enhance their own influence,” said Awol Allo, a UK-based law professor and frequent commentator on Ethiopia and the Horn for African Arguments.

“Amidst the growing competition for influence among the Middle Eastern axes, Addis Ababa has managed to avoid taking sides — at least publicly — and leverage its geostrategic significance as the region’s hegemon to attract much-needed investment from several different partners.”

Despite this, the US remains firmly committed to Ethiopia “more than ever,” according to staff at the US embassy in Addis Ababa.

“Ethiopia plays an important role for regional stability as the largest contributor to UN peacekeeping missions globally and host to one of the world’s largest refugee populations,” said a US diplomat in Addis Ababa who asked not to be named. “With a growing population of over 100 million, Ethiopia also represents tremendous untapped economic potential. The reform process launched by Prime Minister Abiy opens the door for further progress and collaboration in all of these areas, not least because democracy and good governance are powerful factors in building political stability and economic prosperity. Far from drifting away from Ethiopia, the US is moving closer as we see a clear alignment in our priorities.”

At the same time, US counterterrorism efforts will continue in partnership with Ethiopia and further afield in Africa.

“The transnational challenges of terrorism and extremism in the Sahel, northern Nigeria, Somalia, and now in Central Africa, and the rise of Boko Harem, al-Qaeda in the Magreb, ISIS West Africa, and al-Shabab, require new, determined regional approaches to counteract these groups,” said Tibor Nagy Jr., assistant secretary of state for the Bureau of African Affairs at the US Department of State. “This includes better-trained and paid African security and law enforcement.”

Despite such threats and the measures needed to counter them not going away, the Ethiopia-Eritrea rapprochement is one of several seemingly positive political developments assisted by external forces that has sparked talk of a "new dawn" for the Horn after decades of strife and suffering.

Eritrea has signed declarations of peace and cooperation with Djibouti and Somalia. After years of hostility over the building of the Renaissance Dam on the Blue Nile, Ethiopia and Egypt have seen a significant improvement in relations. Sudan, too, has mended relations with Egypt and has managed to get US sanctions lifted.

However, affected citizens still see these geopolitical machinations as a potential cause for concern. Eritreans remain particularly skeptical about the motivations of their president, Isaias Afewerki, whose authoritarian regime is blamed for an endless stream of Eritreans crossing the Mediterranean toward perceived safety in Europe.

“Isaias never wanted the border open, but he had pressure put on him,” said Yohannes, an Eritrean who was conscripted into the army at 16 and forced to serve for 18 years before crossing the border to live in Ethiopia. “In the end, he opened it for his image, not for the people. Nothing will change in Eritrea,” Yohannes said.

Ordinary Eritreans and Ethiopians worry about getting caught up in the ensuing struggle for influence in the region. As their respective governments hastily comply with external forces vying for influence, citizens fear they might neglect their internal duties and obligations.

“There hasn’t been any legal ratification or laws put in place by the government since the border was opened; they are ad-libbing the whole process,” said a young, Ethiopian doctor working in a city close to the Ethiopia-Eritrea border who wishes to remain anonymous. “It’s very lazy by the leadership, and potentially laying the groundwork for problems later.”

A lack of strong leadership in the Horn may allow Gulf rivals to prioritize their brinkmanship over humanitarian consequences in vulnerable states in the region.

Relations between Somaliland and Somalia sunk to a new low in the wake of a UAE company striking a major deal with Somaliland to develop its Berbera Port. Somalia says the move undermines its sovereignty and declared the port deal illegal because Somaliland’s de facto independence from Somalia is not officially recognized.

“[Ethiopia] is engaged in a dangerous game,” Awol said. “The combination of the Gulf’s transactional politics and Africa’s often kleptocratic leadership could prove treacherous as historic rivalries take on new twists and matters develop beyond the Horn’s control.”