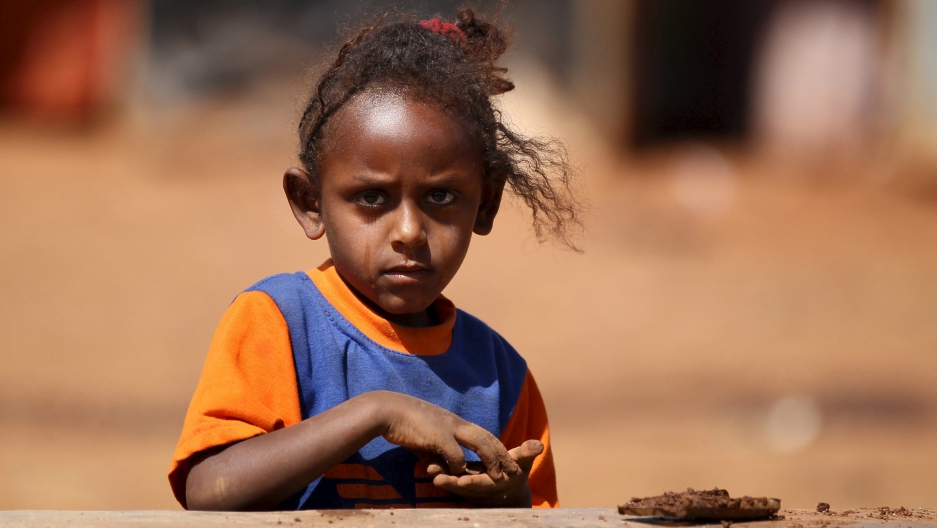 An Eritrean refugee girl plays with clay in front of a shelter in Mai-Aini refugee camp in the Tigray region of Ethiopia, Feb. 10, 2016.

Sand and grime surround the drooping eyelids of a tired 14-year-old Eritrean girl in a dirty pink tracksuit who spent the night crossing from Eritrea into the enemy territory of Ethiopia.

She carries a single plastic bag containing a few pieces of clothing, an orange cup and a small flashlight. Its batteries are almost dead. Beside her are four men, three women and five younger children, all of whom having crossed were picked up by Ethiopian military before being dropped off at a governmental compound in the town of Adinbried.

Simple buildings mark the beginning of the bureaucratic and logistical process of assigning them asylum status before finally moving them to one of four refugee camps designated for Eritreans in Ethiopia’s northern Tigray region. 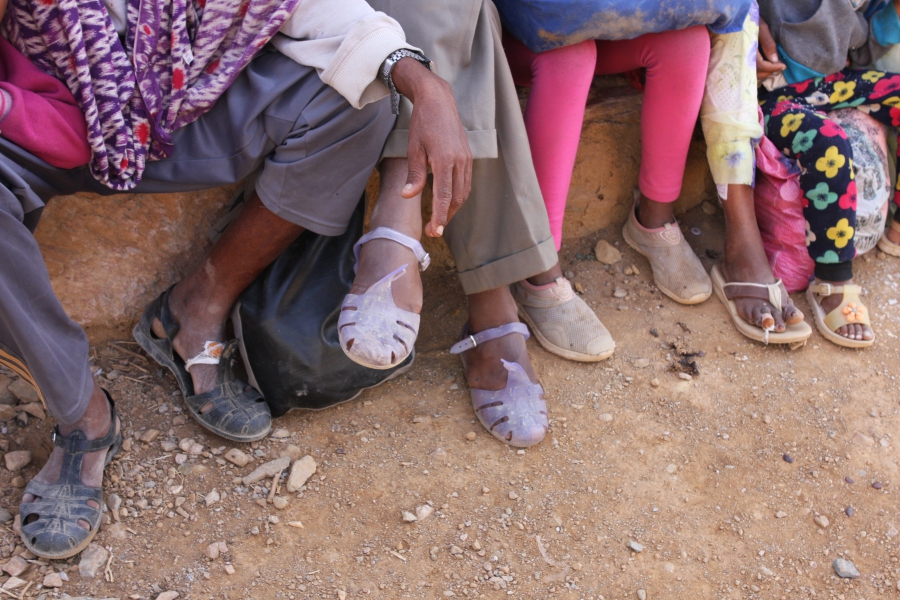 A group of Eritrean men, women and children who have just been dropped off in the small town of Adinbried, having crossed the border into Ethiopia the night before.

“He was good,” a 31-year-old man in the group says about the smuggler they each paid $2,500 to get them across. “He showed us the safe paths, and helped carry the children on his shoulders. He didn’t ask for more money like some do.”

Each night along the 567-mile shared border, Eritreans move through the hilly terrain out of sight of their own military to escape into Ethiopia.

Previously, the Eritrean military employed a shoot-to-kill policy, but it’s reportedly less rigorously enforced now as discontent and sympathy spread in the military.

“Our wives didn’t want us to go and were too scared to come,” says a 39-year-old Eritrean former soldier — now deserter — who crossed the border with two other soldiers. “But they’re not angry with us. Whether we are in national service or Ethiopia they still can’t see us.”

In February 2017, 3,367 Eritrean refugees arrived in Ethiopia, according to the Ethiopian Administration for Refugee and Returnee Affairs (ARRA), many fleeing the likes of enforced indefinite military service, illegal imprisonment and torture.

There are now about 165,000 Eritrean refugees and asylum-seekers currently living in Ethiopia, according to the United Nations.

Heading to Ethiopia is a tempting option, due to its proximity, open-door policy and shared culture. Eritrea was Ethiopia’s most northern region before independence, and many on both sides of the border still share the same language, religion and culture.

After Ethiopia’s present government came to power in 1991, following a revolution against a military dictatorship, Prime Minister Meles Zenawi established an open-door policy toward refugees as a gesture of pan-Africanism — one laced with political considerations and calculated to benefit Ethiopia’s standing regionally and internationally.

Zenawi died in 2012 but his open-door policy has remained in place. It now stands in marked contrast to the strategies of migrant reduction increasingly being adopted in many Western nations.

Ethiopia continues to welcome Eritrean refugees despite two decades of contentious and complex relations between the rival nations.

After Eritrea’s independence became formalized in 1993 — with a referendum sanctioned by the Ethiopian government — relations between the two countries remained relatively civil for a few years.

But eventually tensions worsened over ostensibly economic issues, which were always underscored by historic and ideological frictions, until in 1998 Eritrea invaded the small and inconsequential-looking border town of Badme before pushing south to occupy the rest of Ethiopia’s Yirga Triangle, claiming it was historically Eritrean land. 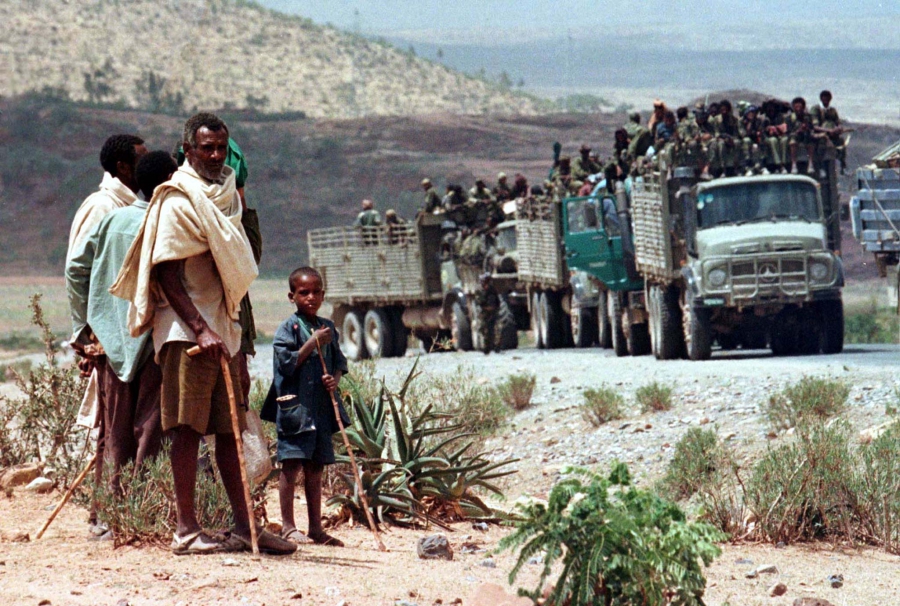 Herdsmen watch a convoy carrying Ethiopian soldiers pass on its way to the frontline at Zalambessa, as Ethiopian and Eritrean forces clashed near the disputed town of Badme, June 11, 1998.

Ethiopia eventually regained the land but the fighting cost both countries thousands of lives, billions of dollars desperately needed elsewhere and sowed rancour and disagreement that’s festered ever since.

An internationally brokered peace settlement following the 2000 ceasefire returned Badme to Eritrea, but Ethiopia still occupies the territory. The government felt the Ethiopian public wouldn’t tolerate the concession of a now iconic town responsible for so many lost Ethiopian lives — hence Badme remains within the Yirga Triangle jutting defiantly into Eritrea.

But the Ethiopian government has seemed to be more conciliatory toward ordinary Eritreans.

“We differentiate between the government and its people,” says ARRA’s Estifanos Gebremedhin. “We are the same people, we share the same blood, even the same grandfathers.”

Shimelba was the first Eritrean refugee camp to open in 2004 and it now houses more than 6,000 refugees. About 60 percent of its population come from the Kunama ethnic group, one of nine in Eritrea, and historically the most marginalized.

“I have no interest in going to other countries,” says Nagazeuelle, a Kunama who has been in Ethiopia for 17 years. “I need my country. We had rich and fertile land, but the government took it. We weren’t an educated people, so they picked on us. I am an example of the first refugees from Eritrea, but now people from all nine ethnic groups are coming.” 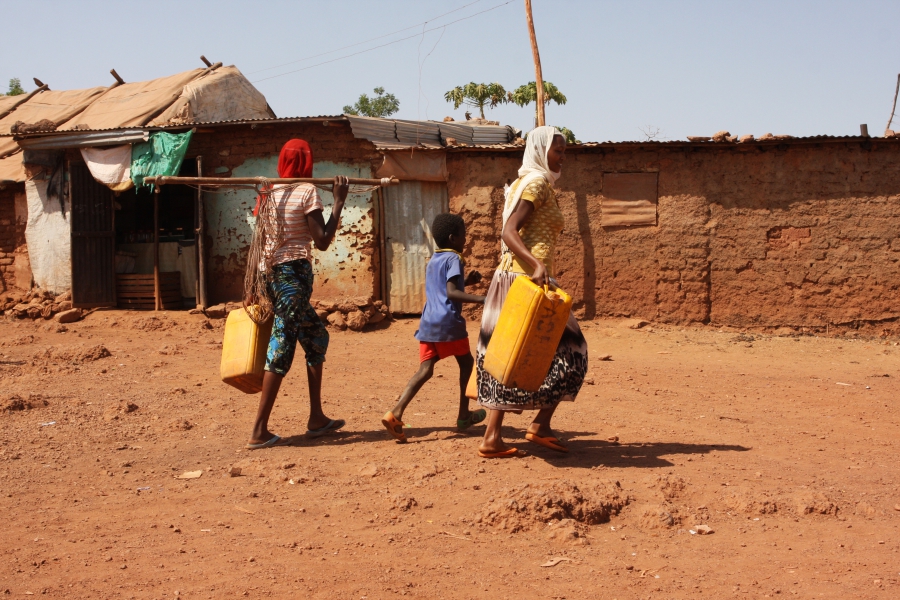 Shimelba was the first camp for Eritrean refugees opened in 2004. It now houses more than 6,000 refugees. About 60 percent of its population come from the Kunama ethnic group, one of nine in Eritrea, and historically the most marginalized.

Refugees in Shimelba camp speak of government atrocities back home, ranging from accusations of genocide against the Kunama, including mass poisonings, to government officials shopping at markets and then shooting stall owners due to disagreements over prices.

“The world has forgotten us, apart from the US, Canada and Ethiopia,” says Haile, an Eritrean in his fifties who has been a refugee for five years. He says his father and brother died in prison.

“The United Nations is too tolerant of [Eritrean President Isaias Afewerki],' he says. "What is happening is beyond language, it is a deep crisis — so why is the international community silent?”

Some argue the situation in Eritrea isn’t as bad as claimed. A UN report last year accusing Eritrea’s leadership of crimes against humanity has received criticism for being one sided and for entrenching a skewed, negative perspective dominant in policy circles and Western media.

Refugees in the camp tell a different story.

“It is real, nothing is exaggerated,” says Dawit, a Shimelba resident of eight years. “We have the victims of rape, torture and imprisonment in our camp who can testify. We were impressed by the report by the UN and were expecting results. But nothing has happened. Why? It has the information.”

About 30 miles south of Shimelba is Hitsats, the newest and largest of the four camps. It was built in 2013 and houses about 11,000 refugees, of whom about 80 percent are under 35 years of age. Initially the camp’s infrastructure was poor, but now, while remaining simple, amenities and conditions have improved. The camp is neat and people make their accommodations as homey as possible. Some residents grow small gardens full of flowers, and you’ll often find neighbors talking over coffee. 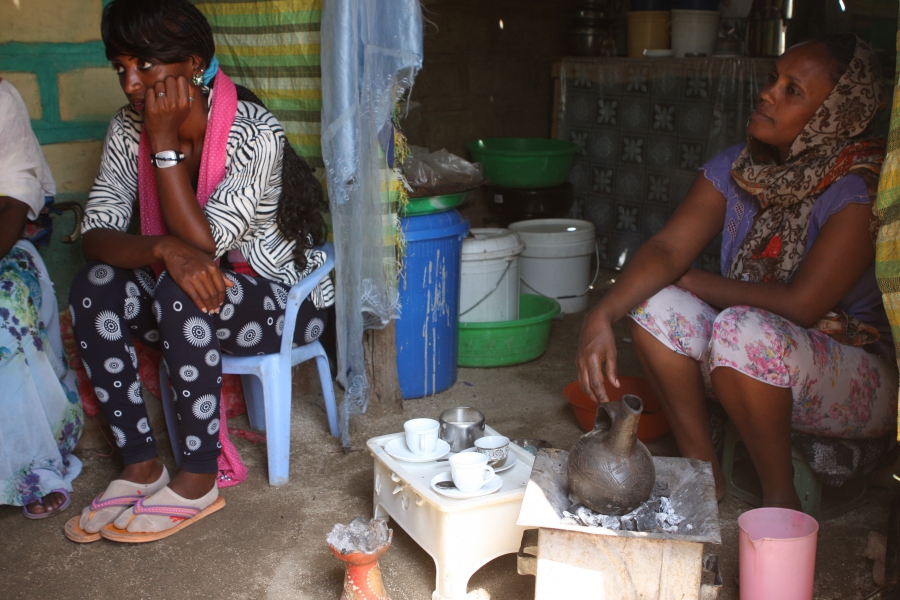 Ariam (R), 32, makes coffee in her home. She came to Hitsats camp four years ago with her two children after spending four years in a Sudanese refugee camp.

“In Sudan there are more problems, we can sleep peacefully here,” says 32-year-old Ariam, who came to Hitsats four years ago with her two children after spending four years in a refugee camp in neighboring Sudan.

Refugees say the Eritrean military launches missions into Sudan to capture refugees who have fled. But the Ethiopian border with Eritrea is much more heavily guarded than Eritrea’s with Sudan, and the size and strength of the Ethiopian armed forces make such raids far harder and more dangerous — not to mention the risk of political and military fallout from such incursions.

“It is real, nothing is exaggerated. We have the victims of rape, torture and imprisonment in our camp who can testify.” — Eritrean refugee in Shimelba camp

Despite the camp’s relative security and comfort, not all refugees feel settled there, of course.

“I want to go to another country,” says 23-year-old Samrawit after entering Ariam’s home for coffee, and who has lived in the camp for nearly a year and a half. “I don’t dislike it here, but from Ethiopia it’s difficult to communicate with my family. From other countries it would be easier.”

The country has good reasons for being so welcoming.

“Ethiopia strongly believes that generous hosting of refugees will be good for regional relationships down the road,” says Jennifer Riggan, an associate professor of international studies at Arcadia University and an expert on Eritrean refugees in Ethiopia.

There are also financial incentives for hosting refugees. The European Union and Britain compensate Ethiopia for keeping refugees within its borders — similar to the approach the EU has taken with Turkey. One recent example was a joint initiative announced by the UK, the EU and the World Bank to fund the building of two industrial parks in Ethiopia to generate about 100,000 jobs, at a cost of $500 million, with Ethiopia required to provide employment to 30,000 refugees as part of the deal.

The open-door policy is also good for the Ethiopian government’s image — much needed after global criticism of crackdowns during the country’s recent protests and ongoing state of emergency. And given the acrimony between the Ethiopian and Eritrean governments, taking in Eritreans may even be a way for the former to thumb their nose at their archrivals.

Whatever the real motivations, today Ethiopia is looking to better assimilate these refugees by embracing the 2016 Leaders’ Summit on Refugees — pushed by President Barack Obama — that called for better integration, education, employment and residency opportunities for refugees. 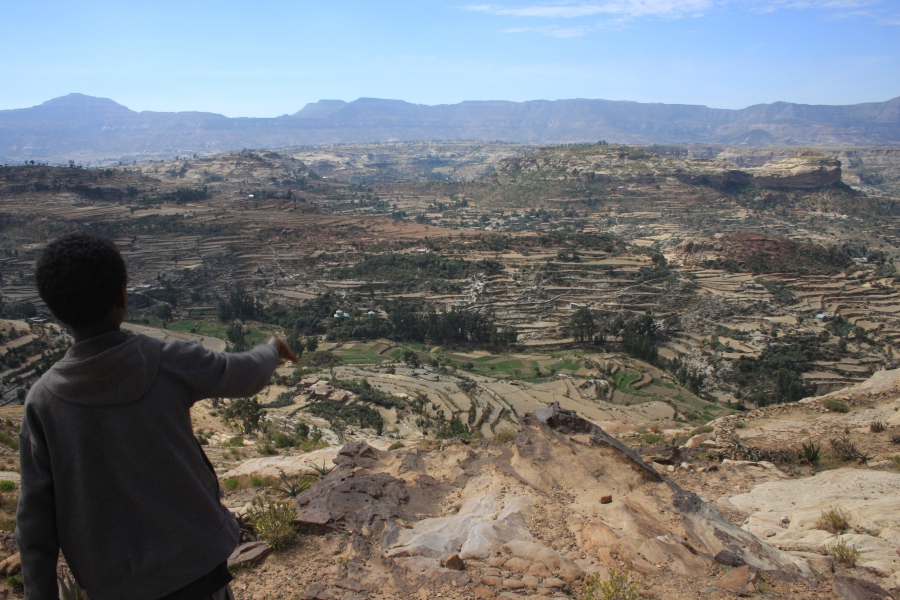 For some Eritreans fleeing into a rival nation, frictions remain.

“People recognize the shared culture and ethnic background, and that helps for many things, but there’s still distrust because of the 30-year war [for independence],” says Milena Belloni, an anthropologist who is currently writing a book about Eritrean refugees. “There’s a double narrative.”

While both sides talk of the other as brothers, she explains, historically Eritreans have looked down on ethnic Tigrayans, who came to Eritrea as migrant workers when it was an Italian colony during the first half of the 20th century, while Tigrayans have tended to see Eritreans as arrogant and aloof.

In addition to the camps, thousands more Eritreans live in Ethiopia outside the asylum system. In the capital city, Addis Ababa, about 370 miles south of the camps, whole neighborhoods are dominated by Eritreans.

Hence the distinctive guttural sounds of Tigrinya, accompanied by the strong aroma of coffee, coming out of cafes with Italian-sounding names — a relic of Eritrea’s colonial history.

"We are the same people, we share the same blood, even the same grandfathers.” — Estifanos Gebremedhin, Ethiopia’s Administration for Refugee and Returnee Affairs

But homesickness and the challenges of living in another country persist.

But that’s not stopping many Eritreans taking a chance while Ethiopia keeps the door open.

And for Western nations struggling to manage the global refugee crisis, Ethiopia can perhaps offer a lesson.

“Ethiopia's response is to manage the gate, and figure out how it can benefit from these inevitable flows of people,” Riggan says. “I definitely think Ethiopia's approach is the wiser and more realistic one."

James Jeffrey reported from the Tigray region of Ethiopia.