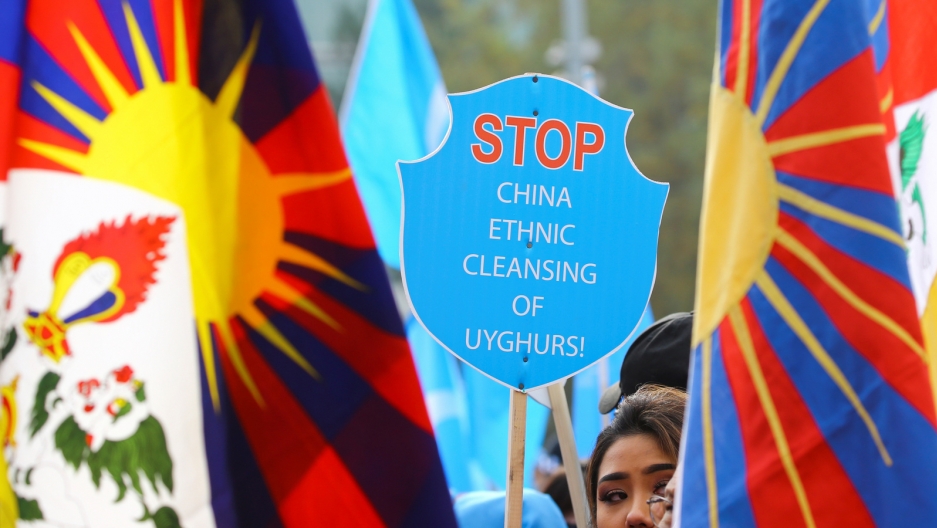 Dolkun Isa, president of the World Uyghur Congress, attends a demonstration against China during its Universal Periodic Review by the Human Rights Council in front of the United Nations Office in Geneva, Switzerland, Nov. 6, 2018.

Western countries including France, Germany and the United States called on China on Tuesday to close down detention camps that activists say hold one million Uighurs and other Muslims.

But China rejected Western criticism of suspected mass detention and heavy surveillance of Uighurs in the western region of Xinjiang, dismissing the allegations as "seriously far away from facts."

"We will not accept the politically-driven accusations from a few countries that are fraught with biases and in total disregard of the facts," Le Yucheng, Chinese vice minister of foreign affairs who headed a 66-member delegation, told the United Nations Human Rights Council.

At a debate at the Geneva forum — which reports on alleged violations in each UN member state every five years and reviewed China's record on Tuesday — Beijing said it protected the freedoms of its 55 ethnic minorities.

China has said that Xinjiang faces a threat from Islamist militants and separatists. It rejects all accusations of mistreatment and denies mass internment, although Chinese officials have said some citizens guilty of minor offenses were being sent to vocational centers to work.

"Stability is most important, prevention should be put first ... Setting up the training centers is a preventive measure to combat terrorism," Le said, referring to Xinjiang.

Another Chinese delegate said that authorities were "providing free-of-charge vocational training with a diploma after exams" to those who had been "coerced or lured" by extremist groups.

"The extreme terrorism in Xinjiang was quite serious, seriously undermining stability and tranquility in the locality and aroused strong indignation from the people," said Yasheng Sidike, the Uighur mayor of the Xinjiang capital Urumqi.

For the last 22 months there had been "no incident of violent terrorism," he added. 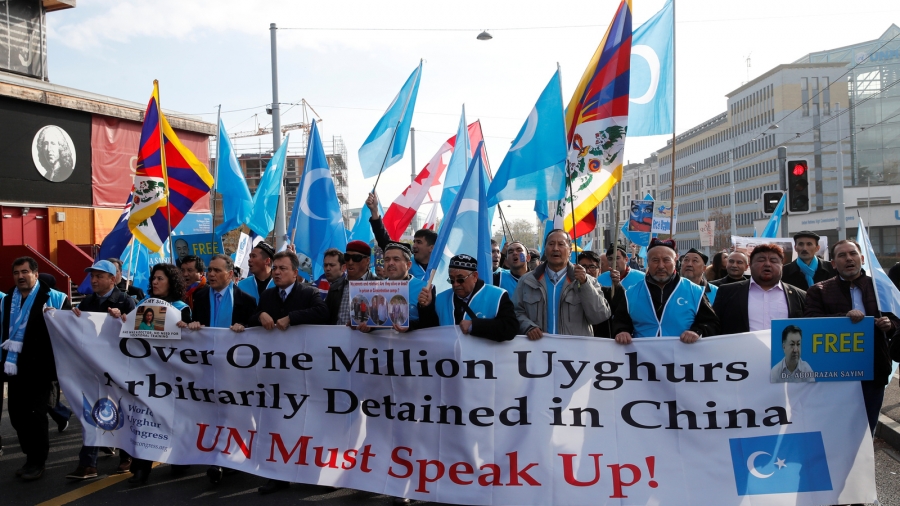 People demonstrate against China during its Universal Periodic Review by the Human Rights Council in front of the United Nations Office in Geneva, Switzerland, Nov. 6, 2018.

A UN panel of human rights experts said on Aug. 10 it had received many credible reports that one million ethnic Uighurs in China were being held in what resembles a "massive internment camp that is shrouded in secrecy."

Western countries spoke out against what they described as a deterioration in China's human rights since the last review in 2013, especially over its treatment of Muslims in Xinjiang.

"We are alarmed by the government of China’s worsening crackdown on Uighurs, Kazakhs, and other Muslims in the Xinjiang Uighur Autonomous Region," US charge d'affaires Mark Cassayre said.

The United States urged China to "abolish all forms of arbitrary detention, including internment camps in Xinjiang, and immediately release the hundreds of thousands, possibly millions, of individuals detained in these camps," he said.

Beijing should "halt massive imprisonment" and "guarantee freedom of religion and belief, including in Tibet and Xinjiang," French Ambassador Francois Rivasseau said.

John Fisher of Human Rights Watch said after the debate that China had "failed to offer credible explanations" for grave violations, including "political education" camps.

Up to 1,000 Tibetan and Uighur protesters from around Europe protested outside the UN headquarters in Geneva during Tuesday's debate. They carried signs saying "STOP China ethnic cleansing of Uighurs" and "Tibet dying, China lies."