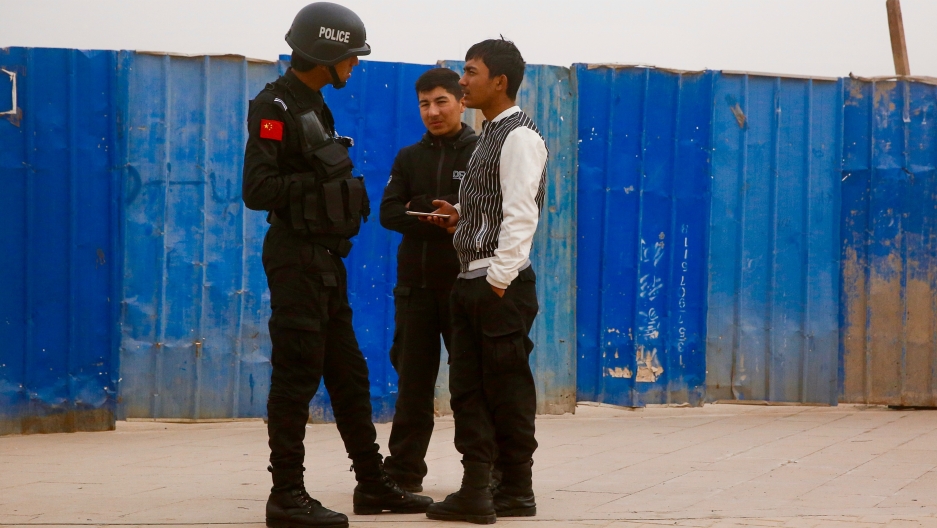 A Chinese police officer talks to men in a street in the city of Kashgar, in the Xinjiang Uighur Autonomous Region of China, on March 24, 2017.

The last time Jewher Ilham saw her father in person was more than five years ago at the Beijing airport.

She was an 18-year-old college freshman when her dad had secured a position as a visiting scholar at Indiana University. Jewher planned to accompany him on the trip to America. She would visit the US for the first time, stay for a few weeks and then fly back to university in China.

At least, that was the plan.

“We got to the airport successfully and we checked our bags,” Ilham recounted. “We got our boarding passes. Everything seemed so smooth.”

“I remember he was telling me, ‘Oh, everything seemed so easy.’ And then, he was really happy. And he said, ‘Maybe there will be no problems.’”

Growing up, Ilham said she remembered the police coming to the family’s house to speak with her dad on occasion. He wouldn't make a big deal out of it, saying that the men were actually friends of his.

At the time, Jewher did not fully realize who her dad was. His name is Ilham Tohti, and he’s an internationally known economist, writer and advocate for the rights of Uighurs in China.

“I did not understand why my dad spent so much time in front of computers,” she said. “All night, he would just type and type and type and type. Nonstop. I could hear the sound of the keyboard all night. And I used to just complain that it bothered my sleep.”

The problems for Jewher and Tohti at the airport began when they had to present their passports. Guys in black suits showed up, she said, and they took the two of them to a small room for questioning. The questioning went on for a few hours.

When it came time to board the plane, the security men said Jewher would be allowed to leave but Tohti would have to stay behind with them. She told her dad she didn’t want to go. But he insisted that she went to America.

“He pushed my back and said, ‘Go. Don’t look back. Don’t cry. Just go. Keep going forward. Do not ever look back. And study hard,’” Jewher recounted. “He’s like, ‘Remember, you are Uighur. You are a strong girl. Do not let anybody see you cry.’”

The Uighurs are an ethnic minority group with a long history in the northwestern Chinese province of Xinjiang, which is officially named the Xinjiang Uyghur Autonomous Region. Like Tibet, China has not always had full control over the region and Beijing has long feared the rise of a separatist political movement there.

Uighurs speak a Turkic-based language, practice Islam and refer to their homeland as East Turkestan. The population of Xinjiang is about 24 million. More than half of the people belong to Muslim ethnic minority groups — most of which are Uighurs.

Reluctantly, Jewher said she got on the plane that day in 2013. And she cried throughout the entire flight to the US. This fall, she started classes as a senior at Indiana University and said she is hoping to find a way a stay in the United States long term.

Her father, back in China, is in prison, serving a life sentence on “separatism-related” charges. Human rights groups and US officials have denounced his treatment. 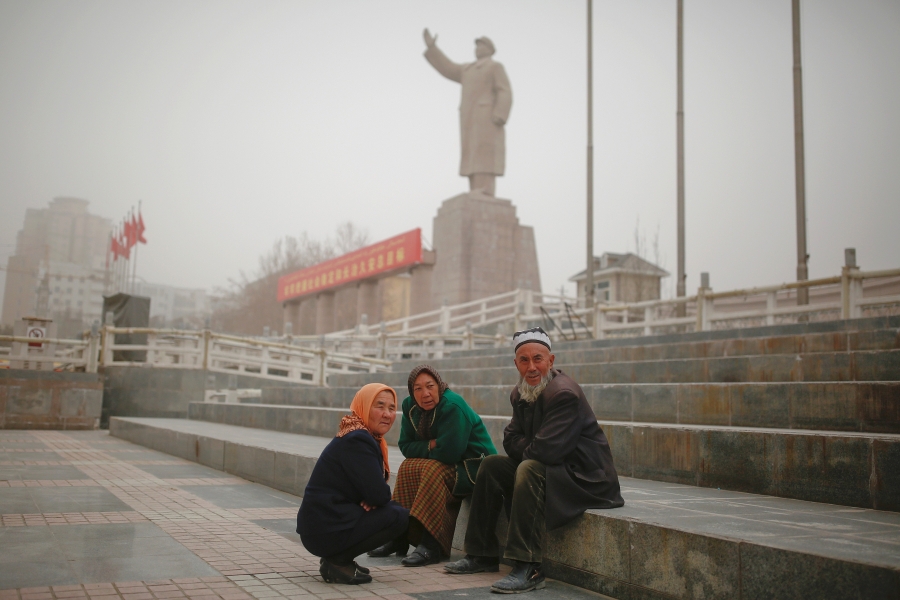 But things have gotten far worse for Uighurs and other Muslims in far western China since the government launched its “Strike Hard” campaign against Islamic extremism in 2014. That was the year Tohti was formally sentenced. And the situation in Xinjiang has become especially repressive in the last year and a half.

In early 2017, people outside of Xinjiang with relatives, friends or colleagues living inside the province started to notice something. Their contacts were going silent. Emails and phone calls went unanswered. It was like all of a sudden, large numbers of people in Xinjiang were just, gone.

Alim Seytoff grew up in Xinjiang and is now the director of the Uighur language service at Radio Free Asia, a US government funded news outlet based in Washington, D.C. Seytoff said large numbers of people, mostly able-bodied males, in the province have been rounded up and put into internment camps.

Seytoff said the extent of the crackdown is so vast, it is difficult to find a Uighur family that has not been affected.

“More than one million Uighurs and other ethnic minorities are in these internment camps. And another two million, they attend this daily political indoctrination — kind of, brain washing sessions,” Seytoff said. “This is a massive political campaign to basically intimidate the Uighurs and indoctrinate them.”

After RFA started reporting the story, Seytoff said relatives of several members of the Uighur speaking staff in Washington have been harassed by police or sent to detention camps. Like most of the Uighurs who live in the US, Seytoff said his relatives back home in Xinjiang have cut off all communication with him.

At times, Chinese officials have denied the camps exist. At other times, they say the facilities are education and job training centers, not internment camps.

#Editorial: Tight #security is the right and only choice for the government to rid #Xinjiang of extremism and terrorism. The region's booming tourism industry and reviving economy are testament to that.

But in an audio clip provided by Radio Free Asia, a Communist party official is heard explaining the crackdown in Xinjiang in explicit terms.

“People in the re-education camps are infected with the ideological illness of religious extremism and violent terrorist ideology. Therefore, they must seek treatment.”

“If we do not eradicate religious extremism at its roots, violent terrorist incidents will grow and spread all over like an incurable malignant tumor,” the Uighur speaker said in a recently-obtained recording that has circlulated on Chinese social media.

Detainees are forced to do things like study Chinese, pledge loyalty to the Chinese Communist Party, attend flag raising ceremonies and sing patriotic songs. Oftentimes, they are not told why they have been detained or how long they will be held, explained Gardner Bovington, an expert on Xinjiang from Indiana University.

“But they are not told in advance,” he adds. “They’re not even told at the time of release, when and why the decision was made.”

Even for Uighurs and other Muslims living outside of the camps in Xinjiang, there is intense pressure to change their behavior. Families with loved ones living abroad have cut off all communication with their relatives, because simply contacting people in foreign countries — including the US — can mean a visit from the police.

As one United Nations official recently put it, the province has come to resemble a “no rights zone.”

Reports from inside Xinjiang describe an atmosphere of total surveillance, with an omnipresent network of CCTV cameras and police checkpoints. Uighurs are forced to provide finger prints, iris scans, sample voice recordings and DNA samples to authorities. Many have had their passports recalled. Uighur citizens are also required to install apps on their smart phones to make it easier for the government to watch their every digital move.

'The practices of Islam is under attack'

Human Rights Watch just released a detailed report about the Chinese government’s campaign against the Muslims of Xinjiang. Senior researcher Maya Wang said the goal, as stated by Beijing, is to “eradicate ideological viruses.”

“Much of what it means to be a Muslim, the practices of Islam, is under attack. But also, the use of Uighur language or Kazakh language is being replaced by Mandarin,” Wang said. “I think it is fair to say that the authorities' goal is to eradicate these identities.”

There have been violent incidents in Xinjiang over the years. In 2009, riots there ended with Chinese businesses being vandalized, ethnic Chinese people beaten to death in the streets, and more than 150 people killed. The government in Beijing also blames Xinjiang Muslims for several terrorist attacks in China in recent years. Chinese officials say Uighurs have also gone off to fight with Islamic extremist groups in Syria, though they are not certain of how many. 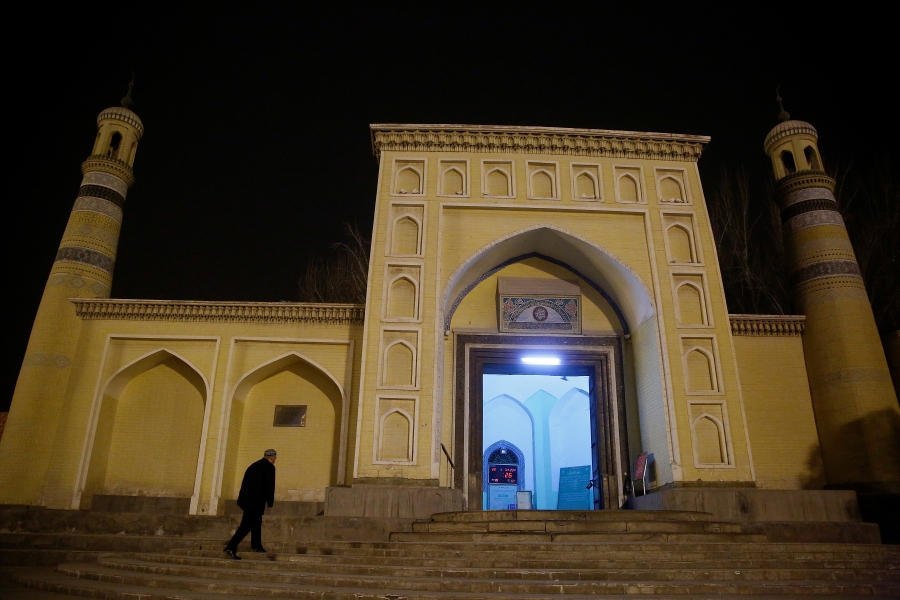 A man arrives at the Id Kah Mosque for morning prayers in Kashgar. The architect of the anti-terror drills and other new measures in Xinjiang is Chen Quanguo, appointed Communist Party boss in the region in August in what analysts said was an implicit endorsement of his hard-line management of ethnic strife in neighboring Tibet.

But human rights advocates say Beijing has used these incidents to justify repression and collective punishment in Xinjiang. China has responded to the criticism by saying its policies there are an internal matter. The story is getting more international attention, however.

A recent letter from a bipartisan group of US Congress members described the human rights situation in Xinjiang in stark terms.

“Muslim ethnic minorities are being subjected to arbitrary detention, torture, egregious restrictions on religious practice and culture, and a digitized surveillance system so pervasive that every aspect of daily life is monitored,” the statement read. The lawmakers are calling on the Trump administration to implement new sanctions against Chinese officials responsible for setting policy in Xinjiang and US companies selling technology used by Chinese security agencies in the province.

According to the New York Times, the administration is considering doing just that.