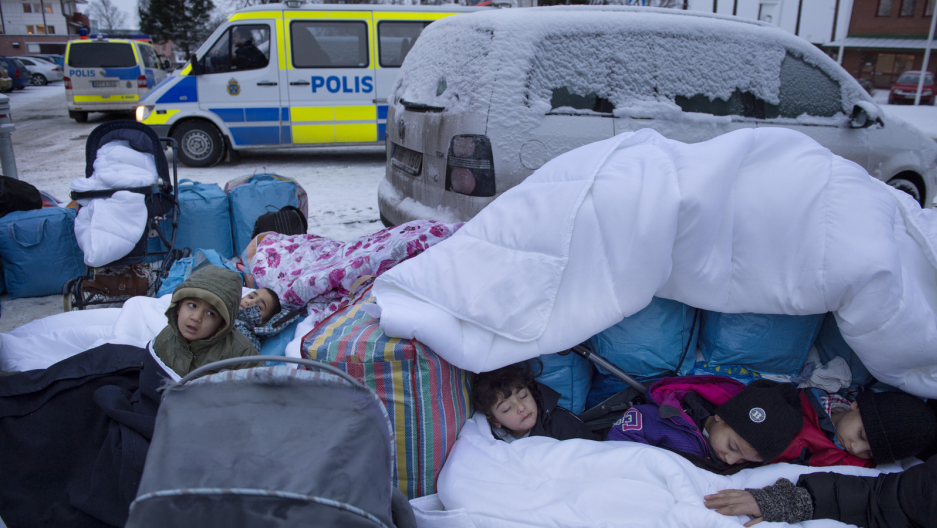 Children Nor, Saleh and Hajaj Fatema from Syria sleep outside the Swedish Migration Board in Marsta, outside Stockholm, Sweden.

As Alana Abdallah headed home for the day, she had a lot on her mind. After her parents divorced, she stayed with her mother, but when Abdallah married, she moved in with her new husband. He was probably home now, cooking and cleaning. Kids were not in the mix — not yet.

But something else weighed heavily on Abdallah’s mind: Sweden's general elections. Abdallah, a 29-year-old immigrant from Iraq who lives in Sweden, has worked for the past two years with ZigZag, an organization that focuses on increasing voter turn out and getting more immigrants to vote. She wasn't sure their efforts worked.

On Sept. 9, 2018, the far-right Sweden Democrats party won almost 18 percent of the votes and other far-right parties made a dent too.

At least they’d tried their best to encourage immigrant voters, Abdalla said. Voter turnout in her neighborhood of Gullvik came back higher than expected.

“We want to inform people that it’s really important to vote,” she said. “They are a part of society, too," Abdalla said. “Our mission is to reach people, to make some change for society, be a good human, do something good.”

ZigZag has taken Abdallah to Hermodsdal and Gullvik, predominantly immigrant neighborhoods in the coastal city of Malmö in southern Sweden, to hand out leaflets on weekends prior to the September general election.

The election was crucial for Abdallah and many of her neighbors because of the rise of the Sweden Democrats, the anti-migrant, far-right party of Sweden. Immigrants have been under pressure to behave more like Swedes, Abdallah said, and some have been victims of xenophobic crimes. With the Sweden Democrats’ gains, many immigrants in Sweden fear their status will be revoked, that they will be sent back to war zones.

The refugee crisis of 2015 saw Sweden take in the highest per capita number of refugees of all European countries, with more than 160,000 asylum-seekers arriving in the country of 10 million inhabitants that year.

Later, Sweden tightened its immigration policy with a retroactive law to send people back if their home country was considered safe enough.

Related: Sweden was among the best countries for immigrants. That's changing.

Then a surge of websites, YouTube channels, podcasts and blogs appeared that were highly critical of the country’s open-door policy and blamed migrants for the disruption of law and order in the country and of the country’s identity.

Abdallah was 9 years old when she arrived in Sweden and she feels every bit as Swedish as anyone else. But in recent years, she’s felt a shift in society.

As she was handing out leaflets one day before the election, a migrant woman refused to take a paper from her, assuming — because of her headscarf — that the leaflet was religiously affiliated. 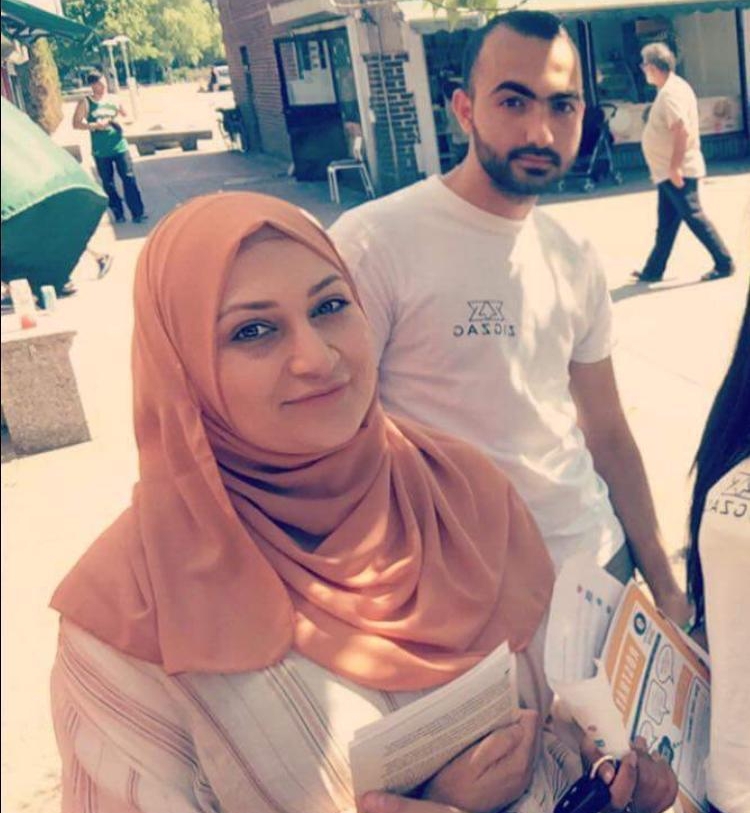 Alana Abdalla canvassed with ZigZag, an organization focused on increasing voter turn out, before Sweden's general elections on Sept. 9, 2018.

“Immigrants are afraid,” Abdallah explained, but because of negative connotations attached to Islam in Sweden, “they don’t want to be seen as religious.”

“I have lived in Malmö all my life,” she said, but lately, “I don’t know where I belong.”

The web of far-right sites referred to in Sweden as “alternative media” paint a picture of immigrants as criminals, sucking away the country’s resources, often containing vitriolic anti-migrant headlines.

These sites are incredibly popular. The most famous, Nyheter Idag, which means "News Today," is read by one in 10 Swedes weekly, according to a recent Reuters Institute study on digital news.

These sites appeared in 2014, explained Kristoffer Holt, a researcher with Linnaeus University's media and journalism department in Kalmar, Sweden.

Holt believes the reason for their rise was growing discontent over the country's immigration policies and how traditional media were covering them.

A United Nations report from December 2015 indicated that Sweden provided the most positive coverage of refugees’ plight, followed by Spain, Italy, Germany and the United Kingdom.

Far-right sites gained prominence as a backlash to that, explained Holt, gaining momentum along with populist opinions across Europe.

“These opinions were secret before,” said Holt. “Now all these views have come forward.”

Youssef, a 24-year-old refugee who is gay from Aleppo, Syria, arrived in Sweden in July 2015. Granted asylum, he now works two jobs and takes classes to finish his high school diploma so he can go to university next semester and become a nurse. Youssef asked to remain anonymous because he has not come out to some of his friends.

One day, Youssef was walking home with his boyfriend, Mohammed, when he was caught off guard.

The two were holding hands in Eriklust, a predominantly white neighborhood in Malmö, when a black car approached, a window rolled down and a man shouted: “It’s not enough you’re a refugee, you have to be gay, too!”

“We didn’t know how to react,” said Youssef. “We were just surprised.”

Incidents like these have been happening more these past couple of years, Youssef said. People have insulted him on the street and at his job, where he cares for elderly people.

One woman working at an employment office told him, “You don’t speak like immigrants or refugees. Your Swedish is good.”

Youssef said he initially considered Sweden as one of the better countries to be a refugee, with racism barely palpable in 2015.

From 2012 to 2016, xenophobic hate crimes in Sweden increased by 16 percent, according to the Swedish National Council for Crime Prevention; Islamophobic crimes increased 43 percent over that same period.

As migrants, including children, were placed in camps across the country to wait for their immigration status decisions, arson attacks on these camps multiplied, injuring dozens and displacing hundreds.

In 2016 alone, more than 90 arson attacks on asylum centers occurred, according to a national police survey.

“We started seeing a kind of hate crime that isn’t new but extended to a much more massive degree,” said Sara Högström, a civil rights activist and project manager for Refugees Welcome Housing, a housing association for refugees.

Högström said the negative narratives that have multiplied about immigrants in the media have facilitated these crimes.

“People with these opinions feel more empowered to take actions,” she said. “It reinforces their beliefs.”

The link between anti-migrant narratives and hate crimes is not direct, warned Petter Karlsson, a lecturer on the far right in Sweden and diocese chaplain of the Church of Sweden.

The sites make people more confident about their anti-migrant sentiments but they don’t openly condone violence. In that sense, they differ from more radical violent extremist organizations in Sweden, such as the Nordic Resistance Movement, an openly neo-Nazi group.

But despite that difference, violent organizations and far-right sites feed off each other, he added.

“It’s only a few clicks from Breitbart to open neo-Nazi sites,” said Karlsson.

Still, the stream of far-right sites has appealed to a wider base of anti-migrant audiences.

Despite an obvious bias, many present themselves as news organizations like Nyheter Idag, described as nonpartisan. That’s how they’ve become so prominent.

Holt said they’ve come to earn a high level of trust among Swedes, who consider them a legitimate news source.

Nyheter Idag and others like it tend to support the Sweden Democrats’ agenda and buoy up support in elections for the party, alternating between negative migrant stories and positive stories about the party.

They paint the Sweden Democrats as the underdog, the anti-establishment party, a victim of attacks by the ruling Social Democratic Party and from traditional media.

A future for Swedish immigrants?

After the elections, many of these sites posted stories about election fraud, claiming Sweden Democrats really won more than 18 percent of the votes.

“It’s a pattern,” said Karlsson. “The story of the elite conspiring with minorities.”

Karlsson said readers of these sites believe that the elite are working against Sweden's “real people” by taking economic resources away from them and giving them to minorities.

“They feel they are victims,” he said, “that’s the big narrative of populism and far-right extremism.”

To Abdallah, that narrative is not accurate or fair.

“I work like everyone else. I pay my bills,” she said. “I’m a hard-working person.”

But “the media in Sweden show a bad picture of immigrants,” she said.

With immigrants’ futures in the balance, it’s hard to stay calm.

People fear they’re going to get kicked of Sweden, she added, that they won’t find a job.

She’s also thinking of what can happen to her as a lifelong Swede.

“I have a Swedish passport, another country will accept me,” she said. “But Swedish people will lose some good immigrants.”