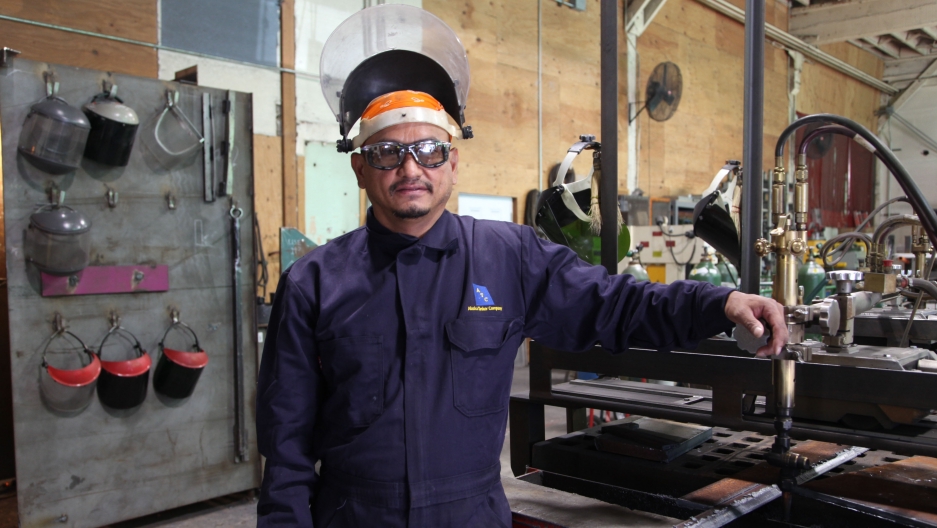 Jorge Balcazar came to the US from Guatemala as a teenager in 1990. He has years of experience as a welder, but he hopes a program at Portland Community College will help him move up the ranks.

For six months, Jorge Balcazar’s classroom has been a 60-acre shipyard on Swan Island, just a few miles from downtown Portland, Oregon.

The 47-year-old was in a maritime welding program where he and 10 classmates were learning to repair and maintain vessels.

One September day, Balcazar meticulously sliced steel through a track burner machine, cutting one sheet into five smaller pieces. He was working on a final project.

“It wasn’t hard for me,” he says about the class after his finals are over. “For other students it was hard, but not for me.”

That’s because Balcazar has more than a decade’s worth of welding experience. He learned the craft in 2007, while working for a company that manufactured dredging equipment in Portland. But when that company moved its operations to Europe in 2017, Balcazar decided to go back to school. He wanted to learn other welding techniques and get certified in federal workplace safety standards, forklift driving and CPR. 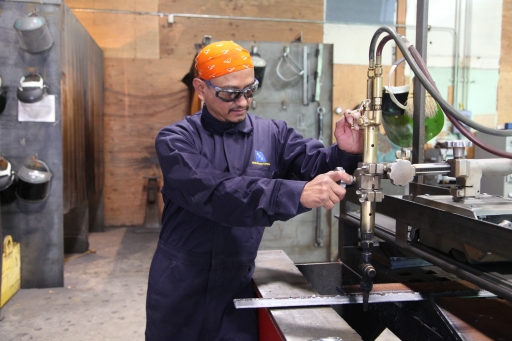 In September 2018, Jorge Balcazar slices steel at his welding class, held in a 60-acre shipyard on Swan Island, just a few miles from downtown Portland, Oregon. He’s studying to be certified as a welder, and also learning English.

There’s another reason that Balcazar, who first came to the US from Guatemala in 1990, wanted to go back to school: to improve his English. Balcazar attended welding classes at the shipyard during the day, then English classes in the evening. The English, he says, will help him do a better job as a welder.

The maritime welding program, which has been offered by Portland Community College since 2017, is especially geared toward non-traditional students — those who are older, don’t have a GED or high school diploma, or are English-language learners like Balcazar. It’s part of Career Pathways, a program where students can earn industry-recognized certifications that can eventually add up to an associate’s degree, or more. It’s meant to be flexible for students who have families or are already working, while ensuring they get into the workforce quickly.

“We know there are many immigrants who come to the US with tremendous work experience,” says Marc Goldberg, who heads work development programs at Portland Community College. “And why wouldn't we take advantage of that expertise and find the right pathway for them to enter the workforce utilizing those skills, recognizing they may have some acculturation in terms of the American workplace?”

Brain Gain: Educational attainment among immigrants coming to the US is on the rise, but what does it take to get them into the workforce?

Immigrants make up 17 percent of the US workforce, according to the US Bureau of Labor Statistics. A higher proportion of immigrants has at least a high school education, relative to native-born workers, and they’re just as likely to have “middle skills” — experience that equals more than a high school diploma, but less than a four-year college degree.

Yet immigrant workers with limited English tend to have lower wages and job quality than native-born workers, says Hamutal Bernstein with the Urban Institute, which released a report in July about how immigrant workers can receive training to meet employers’ needs.

“They can be easily exploited, and they have fewer prospects for advancement,” Bernstein says.

Industry experts say middle-skill workers, those who are experienced, are in demand by businesses. The Urban Institute calls getting these workers — welders, for example — into those jobs “upskilling.”

“We don’t have a huge population of mid-level, skilled tradespeople that are coming up behind those retiring employees, and so we don’t have a lot of skills to fill that high-level gap,” says Hillary Pickerel with Vigor Industrial, a shipbuilding company that partners with Portland Community College in the welding program.

The American Welding Society, a membership organization for welders and other professionals, says the industry will need hundreds of thousands more welders to keep up with demand in the next decade. The Bureau of Labor Statistics also projects that there will be job growth for welders because of aging infrastructure across the US.

Amanda Bergson-Shilcock, director of upskilling policy with the National Skills Organization, a group that advocates for workforce development, says it’s important to have inclusive training programs for immigrant workers.

Balcazar came to the US as a 19-year-old fleeing Guatemala’s civil war. By the time he was in his 30s, he had a family and three children — and was focused on working as a forklift driver, a machine operator and in other jobs to support them. But welding is what he enjoys the most. And that skill in particular eventually helped him buy a home in the Portland area.

“Wherever you go, you can do it, if you really like it,” he says. “At the same time, you make good money.”

Years ago, he tried to take English classes — he can’t recall what kind of program it was, but he couldn’t finish that course. His work schedule was unstable, and he’d only reached 6th grade before leaving Guatemala. But he knows he needs to improve his language skills if he ever wants to move up in the industry. He wants to be a supervisor on worksites.

“That’s what I want to do in the future, to teach somebody how to weld. I want to speak really good English and I want to be a leadman,” says Balcazar.

Balcazar hopes to get there with the certificates he’ll receive from Portland Community College.

Career coach Windy Wahlke helped him navigate an Oregon state program that helped cover the cost of his classes because his company left the country. She also got him a bus pass and taught him how to fill out an online timesheet tracking his hours and pay as a student helper in the class. It’s a skill that he might need at a job site.

“When language learning is part of what you’re working on, it can be very challenging to figure out what resources are available,” Wahlke says.“It’s kind of a scavenger hunt. You’re having to figure out a lot of stuff.”

Sal Castañeda, a Portland Community College outreach coordinator, helped Balcazar choose a welding program that would not only get him a certificate but also teach him new skills, like how to read a blueprint.

“It’s a skill that, if he’s able to learn the blueprint reading, he’d have many more opportunities, and he understands that,” Castañeda says.

Guidance from coaches and advisers like Castañeda and Wahlke improve the chances that students like Balcazar complete their programs, according to Goldberg.

“We have a completion rate of 94 percent,” he says. “Around 75 percent of our students who get that first credential continue on towards further education at PCC after completing.”

Balcazar’s instructors and coaches say employers are looking for workers just like Balcazar, who is motivated, has perfect attendance and received straight As.

Balcazar says he wants to do well in school to set a good example for his three children.

“I have to show them I try to do the best I can. I show them good attendance, responsibilities and everything,” he says. 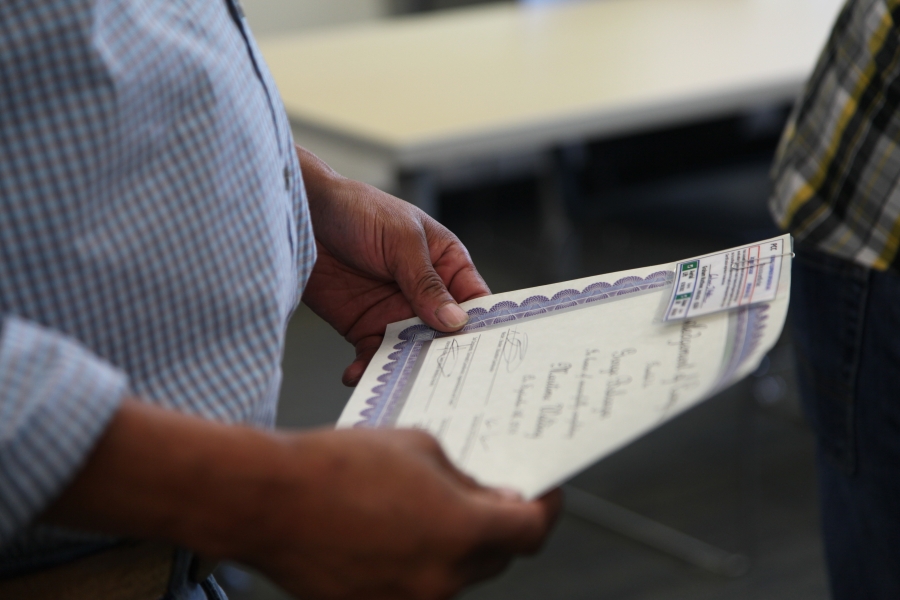 The certification for welders at Portland Community College takes six months to complete. Jorge Balcazar, 47,  got his certificate on September 5, 2018. “That’s my first time I get my certificate in my life, that’s the first time because I didn’t study anything before,” he says.

During the program’s closing ceremony in September, Balcazar and his classmates received certificates that show they’ve been formally trained in maritime welding. They gathered together after the ceremony, talking about the minor injuries they’ve sustained — a common hazard when working with heat and metal. Once, molten metal landed on Balcazar’s work boots and another time slag, welding residue, got into his ear.

But now Balcazar is ready to move forward. He already has a job lined up with Vigor Industrial to work as a welder in its fabrication shop. He’s proud of what he’s accomplished.

“I feel nervous a little bit. That’s my first time I get my certificate in my life, that’s the first time because I didn’t study anything before,” Balcazar says. “But I feel really good.”

For now, Balcazar’s new wages won’t be much higher than his last job, but his chances of moving up are greater. He hopes to take on more responsibility and help show newer welders the ropes.

For that, he’ll keep working on his English — working during the day and taking classes at night.

This story was updated to correct the spelling of a name, Hillary Pickerel with Vigor Industrial.

Next: In a California elementary school, parents have a classroom of their own