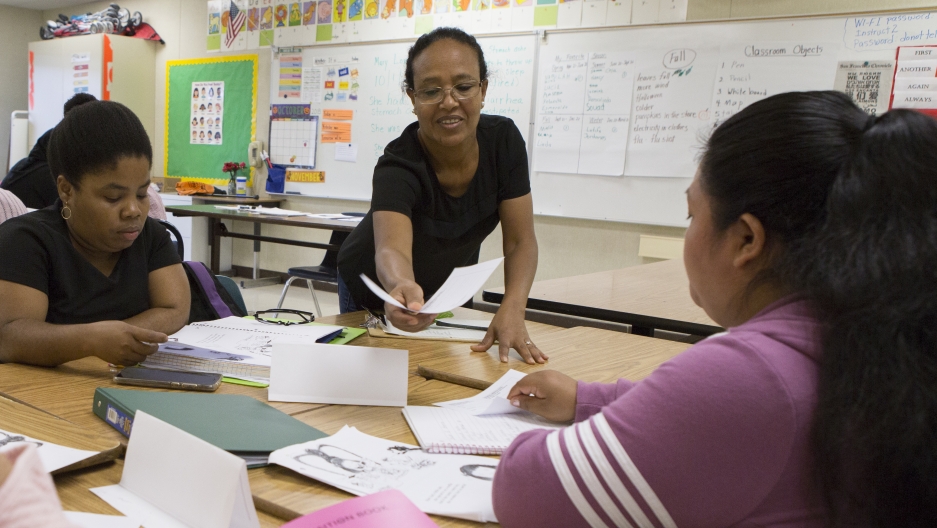 Yordanos Habte hands out practice absence slips to her classmates at Fruitvale Elementary School in Oakland, California on Oct. 1, 2018. She is a student in a family literacy class at her child's school. The class help parents learn skills, such as writing notes to their childrens' teachers.

Inside a classroom at Fruitvale Elementary School in Oakland, California, about 20 women are practicing spelling out loud in English.

They’re the mothers, aunts and grandmothers of children at the school. Four mornings each week, the women — immigrants from Central America, Mexico, the Middle East, Asia and the Caribbean — drop off their children and then head into a classroom of their own to learn English.

Wahbiai Alqaifi, a mother from Yemen, has been in the US for 15 years. She has six children, one of them a fourth grader at Fruitvale. She used to struggle to understand English in her daily life, she says, but the class helped her expand her vocabulary.

Oakland Unified School District is one of more than 100 school districts nationwide working on family literacy, teaching parents English and helping them engage in their students’ education, which in turn helps the children do better in school. Adult education programs struggle for funding, so these programs are not widespread across the country. But in the Oakland schools that offer the program, principals and teachers say the benefits are real: Parents get more involved in their children’s classrooms and are able to help more with homework. And the fact that Oakland’s program is held inside elementary, middle and high schools is part of what makes it work.

“I’ve come to realize that having adult education classes offered in the community, and particularly at a child’s school, makes adult education accessible to some parents who would not normally feel comfortable leaving their community,” says Sue Pon, who worked in adult education in Oakland for more than 30 years and directed the school district's program. “They may not go to an adult school campus to, let’s say, study ESL [English as a Second Language] or for a GED [a high school equivalency degree]. We are a first step.” 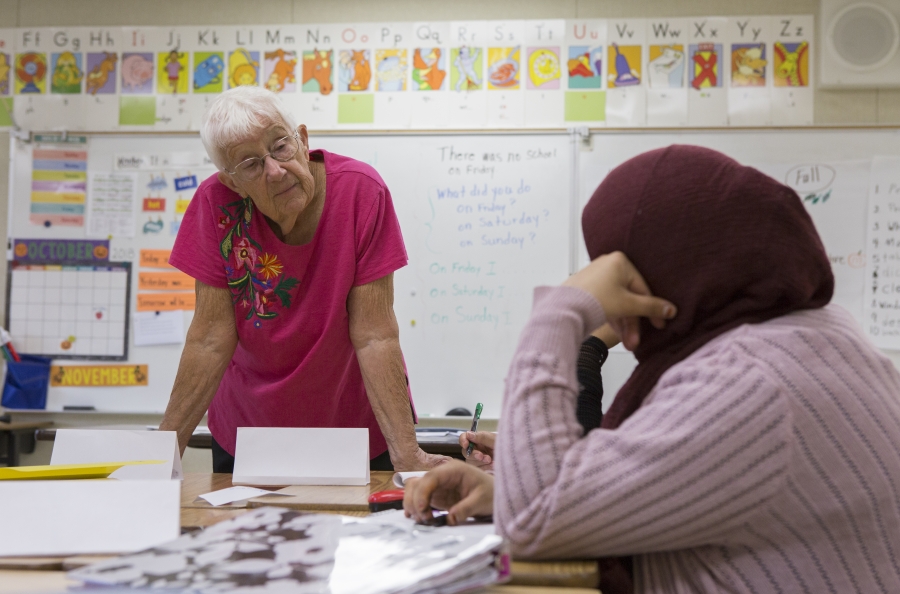 Instructor Ann Moghaddas asks a student to describe what she cooked over the weekend in a class at Fruitvale Elementary School in Oakland, California on Oct. 1, 2018. Some women in the family literacy class, such as those who only speak Arabic, are learning the Roman alphabet for the first time.

The women in the family literacy class have varying levels of English and experience in formal schooling. Some never learned to read or write in their native language. Others, such as those who only speak Arabic, are learning the Roman alphabet for the first time. Meanwhile, Spanish speakers are learning the differences in pronouncing vowels and consonants.

“We just start at the very beginning: alphabetic concepts, phonics,” says Kathy Locke, who teaches the class at Fruitvale Elementary. “That’s where my training as a first-grade teacher really helps, because I’m able to have lots of tools to help them.”

Alqaifi says the class helps her understand her own children.

Mary Sebastian, an adult student from Mexico, says the diversity of her classmates has helped her improve her English conversation.

Brain Gain: More stories about immigrants who are striving — and finding ways around roadblocks in the US education system 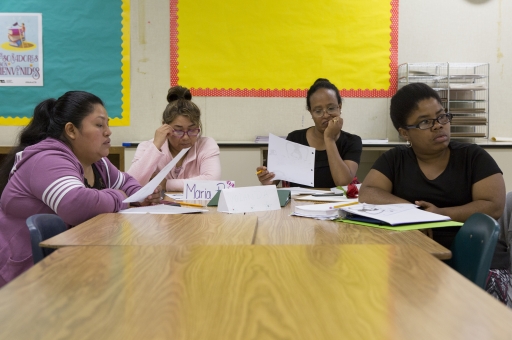 From left, Nicolasa Ramirez, Maria Paz, Yoradnos Habte and Yola Nola Brevil Cornely attend a class at Fruitvale Elementary School in Oakland, California on Oct. 1, 2018. Parents say the course allows them get more involved in their children's educations, while they learn vocabulary and skills.

Part of Locke’s job is to familiarize parents with how the school works, which can be different from how education is set up in their countries of origin. In fall 2017, Locke started explaining how California schools teach math under new national standards known as Common Core.

“It’s been really neat to see my students realize that the stuff that their kids are bringing home for homework that they don’t understand — they actually know how to do it,” Locke says.

Alqaifi says the math unit allowed her to help her fourth-grade daughter with homework questions.

“One time last week my daughter had this one,” says Alqaifi, pointing to a chalkboard with fractions. “I said, 'Yes, yes, I understand this one. I can help you.'”

Locke also teaches a unit on digital literacy and helps her adult students access Google Translate, a language translation service, on their smartphones.

“One of the assignments this year when we did digital literacy was, ‘Send your [child’s] teacher an email’,” says Locke.

Another class assignment was to attend the principal’s ongoing coffee date for parents with prepared questions in English. Patricia Velez-Ceja, who was the principal at Fruitvale Elementary from 2014 through the spring of 2018, says parents from the ESL class stopped by far more than others.

“They come with their little index cards with questions for me. ‘Why are they testing the kids with this?’ or ‘Can you tell me more about this program?’ It’s great to have them asking me questions, instead of [my saying], ‘Oh, let me tell you,’” Velez-Ceja says.

A 2018 study in Social Science Research journal shows some teachers perceive immigrant, non-white parents as less involved, which can affect how their children do in school. Teachers are more likely to give students lower grades and less likely to recommend them for honors classes.

So when those parents come as a group to meet the principal, ready with questions, it makes an impact.

Velez-Ceja says one mother from Guatemala hadn’t received her child’s English-proficiency test results and came to her office every day until she got them. Velez-Ceja doesn’t think she would have been that persistent if she hadn’t already gotten to know her through the family literacy class.

The principal was most surprised when one of the Spanish-speaking mothers in the group asked her why the school didn’t have more bilingual services for Arabic-speaking families, who are the fastest-growing group of families in the district that primarily speak another language.

Parents from the family literacy class have gone on to take higher levels of English at a local community college. Independent evaluations of family literacy programs in Detroit have shown that parents who participate in them get better jobs as a result of the program, and their children attend more days of school and do better academically.

These programs are not only for English-language learners: Classes in some districts help English-speaking parents improve their reading and writing skills, as well as help them take the GED. Other classes, such as the one at Fruitvale Elementary, only have parents who are learning English.

“In some of our studies, we're showing that kids whose parents attend family literacy attend school 16 more days a year. That’s a whole year by the time they graduate high school,” says Sharon Darling, president of the National Center for Families Learning, which provides grants to districts to start such programs and requested and published the evaluation. “We're also showing that our achievement test scores rise with the children who have been with parents in family literacy. So we're excited about what we see both for parents and for children.” 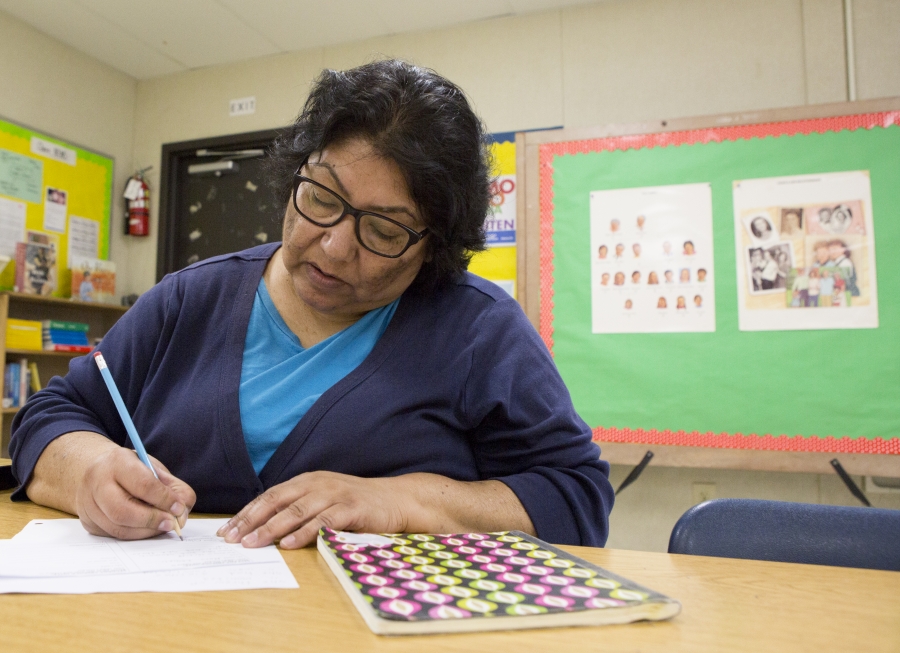 Gloria Lomeli fills in a practice absence excuse form in a class for parents of students at Fruitvale Elementary on Oct. 1, 2018. The parents were asked to create an imaginary child and write a not about why they missed class, including details such as, "She had a stomach ache."

Still, the program isn’t without obstacles. The morning schedule isn’t feasible for parents who work full-time, and funding adult education is a struggle in Oakland and across the country. Darling says one of the biggest challenges is that funding for parents and children is siloed.

“There’s early childhood funding, funding for parent education, but none of those folks tend to pull those pieces together,” says Darling.

Oakland offers the family literacy program in only seven of its 86 schools. But in those schools, Velez-Ceja says, the program is making a difference for their students.

“When they know I know all their moms, I’m having coffee with their parents, they’re going to show up in a different way,” Velez-Ceja says.

This story has been corrected with a more accurate title for Sharon Darling of the National Center for Families Learning.

Next: When war keeps students from starting high school on time, should they be allowed an extra year?