Be self-sufficient. Don’t be a drain.

These are the demands the US government puts on some immigrants who want to come and stay in this country. It’s the crux of the current administration's push for merit-based immigration and of its latest proposal to limit who is allowed to stay in the US permanently.

There are nearly 28 million foreign-born people working in  the US — 17 percent of all workers — and more immigrants arrive to the US with higher degrees than ever before. Over the last decade, 65 to 70 percent of immigrants are part of the US labor force, a bit higher than the percentage of native-born people, according to the US Bureau of Labor Statistics. But it can still be hard to get a footing in the workforce. 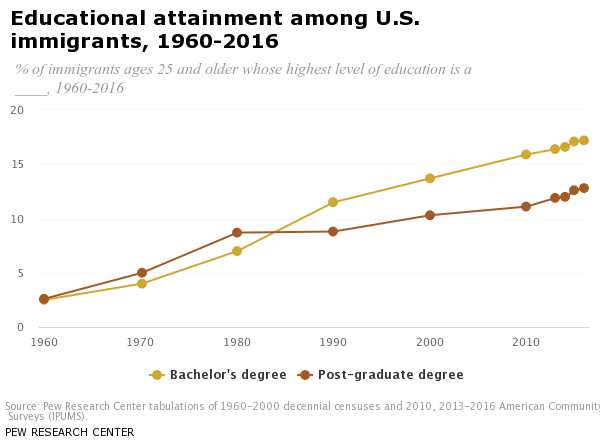 Many of the roadblocks immigrants face while trying to get a job that uses their skills start with education. There are barriers when it comes to enrollment, learning English or the often lengthy process to earn professional credentials.

Jorge Balcázar has a sixth-grade education from Guatemala. On paper, our immigration system might not see him as a contributor. But after more than a decade as a welder, he's the type of highly skilled worker companies need. He wants to learn English so he that can move up in his industry, but he has a family and works a full-time job. Francenette SaintLouis Défonse is a highly educated, experienced nurse from Haiti. Yet even after earning her nursing license in the US, it will take her at least two more years to be able to work in a hospital because of education restrictions, despite a severe nursing shortage in the US.

Balcázar and Défonse are among those who are striving — and finding ways around roadblocks in the US education system.

These are their stories. Have your own story? Tell us about it in the Global Nation Exchange on Facebook.

Get updates from Global Nation
Once a week, in your inbox.
Supported by: Lumina Foundation

For this nurse trained abroad, working at a US hospital is years away

Only 40 percent of nurses trained abroad pass the US licensing exam the first time. But educators say it’s not because they aren’t qualified.

Many immigrants have years of work experience. ‘Upskilling’ programs are helping them use that knowledge.

Jorge Balcazar already has 10 years of welding experience. A six-month certification course will help him get ahead.

In a California elementary school, parents have a classroom of their own

Adult education is often thought of as completely separate from children’s education. But some school districts are trying to integrate them by creating family literacy programs.

When war keeps students from starting high school on time, should they be allowed an extra year?

Advocates say too many schools aren’t giving older teens the chance to get a good high school experience.

Highly trained and educated, some foreign-born doctors still can’t practice medicine in the US

There are tens of thousands of foreign-trained doctors who could help alleviate the US’ shortage. But many of them are not allowed to work here.