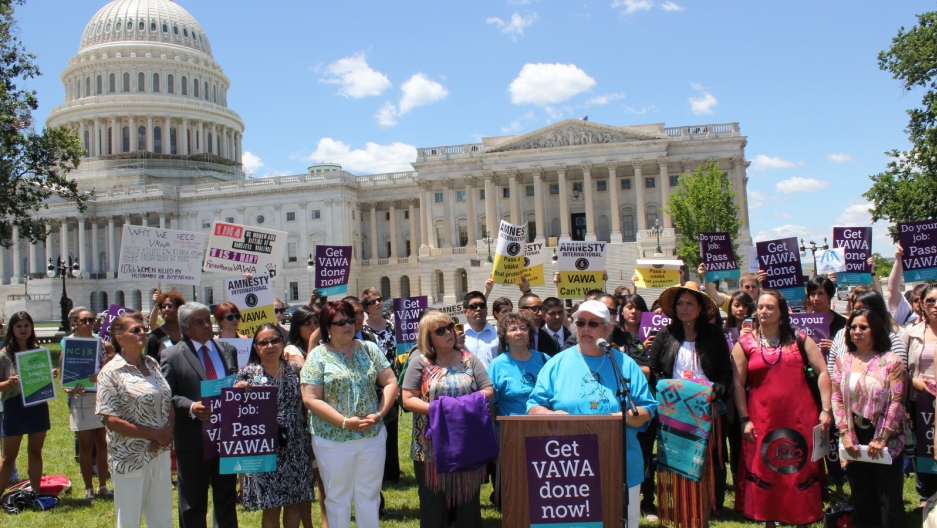 Editor’s note: This story includes an interview on The Takeaway with Leigh Goodmark, the author of the story below.

Violence Against Women Act, the federal government’s signature legislation aimed at responding to domestic violence, rape, sexual assault and stalking, expired at the end of September 2018.

Legislative wrangling over the act’s provisions led to the expiration. This was not the first time controversy has gotten in the way of extending the legislation. Originally passed with strong bipartisan support in 1994, a previous reauthorization ran into problems as a result of disputes involving protection for Native Americans, lesbian, gay, bisexual and transgender victims of violence, and undocumented women.

Although Congress has temporarily reauthorized the act, its future is again uncertain, and advocates warn of the dire consequences of failing to pass the law.

But the fact is that the criminal system supported by the act isn’t stopping intimate partner violence.

The Centers for Disease Control and Prevention estimates that 19 percent of women in America will be raped, 15 percent will be stalked, and 22 percent will experience domestic violence in their lifetimes.

The Violence Against Women Act was the first law dedicated to ending that brutality. With a total authorization of $3.1 billion in 2013, the act supports rape crisis centers, pays for lawyers for victims of violence and provides money for transitional housing. But the single greatest beneficiary of the act is the criminal legal system.

Without such incentives, supporters of the act say, the criminal legal system’s response to domestic violence will falter and violence will increase.

Although rates of domestic violence have fallen steadily since the legislation was enacted in 1994, the decrease in rates may not be a result of the act. Initially, those declines mirrored decreases in the overall crime rate.

And between 2000 and 2010, rates of domestic violence actually fell less than the drop in the overall crime rate — at a time when VAWA was pumping hundreds of millions of dollars into the criminal system.

Related: Will the US deny asylum to domestic violence survivors?

The criminal system isn’t deterring domestic violence for a number of reasons. Criminologists question whether criminal law serves as a general deterrent for any kind of crime.

I am a lawyer who has represented victims of domestic violence for almost 25 years and studied the legal system’s response to intimate partner violence for the last 15 years. As I argue in my new book, “Decriminalizing Domestic Violence: A Balanced Policy Approach to Intimate Partner Violence,” the increased involvement of the criminal system over the last 40 years has done little to solve the problem. Criminalizing domestic violence exacerbates some of the factors that cause it in the first place.

Here’s how that happens:

VAWA’s reliance on the criminal system comes from a time when Democrats and Republicans alike believed that being tough on crime was the answer to violence against women. Former Vice President Joe Biden, the act’s primary sponsor and most vocal advocate in the Senate in 1994, has consistently called domestic violence a criminal issue.

But I argue that the act could do more good if it focused on some of the underlying causes of intimate partner violence. VAWA could fund job creation and training efforts for men who need work. It could invest in community-based programs that would challenge community norms around violence, teach community members to intervene productively, and shore up community infrastructure, addressing the instability that causes domestic violence. It could shift money into programs like Fathers for Change that target the intersection of domestic violence and substance abuse.

The version of the act currently being debated in Congress continues to fund law enforcement disproportionately. But it also has some promising new provisions that deal with domestic violence outside of the criminal system.

Shift away from punishment

For the first time, the act would pay for alternative justice measures designed to help victims of violence find justice without requiring them to turn to the legal system.

Restorative justice, for example, enables victims of violence to enlist community support in holding their partners accountable. Lisalyn Jacobs, who worked on the act’s reauthorizations in 2005 and 2013, notes that these grants recognize that VAWA has been too focused on the criminal system. They are, she says, “an acknowledgment that there’s a significant population of people who need services and who are not engaging with law enforcement.”

The act also provides new ways to remove guns from those who abuse, a measure that could decrease domestic violence homicides. And it increases protections for those in federal public housing. Housing is the single greatest need identified by victims of intimate partner violence. Indeed, domestic violence is one of the primary causes of homelessness for women, and losing public housing can be disastrous for victims of violence. The new version of the act would prevent victims of domestic violence from being evicted as a result of their partners’ crimes and allow for early lease termination and emergency transfers without penalties.

The new provisions don’t make the 2018 version of the Violence Against Women Act perfect.

I believe that it still relies too heavily on the criminal system. It doesn’t do enough to address the causes of intimate partner violence: economic distress, adverse childhood experiences and trauma, unstable communities. VAWA monies that currently go to the criminal system could instead be used for job training and economic empowerment programs, home visitation programs, anti-violence education for young adults and community-based justice.

The 2018 act is a start. But I believe the US is still far from developing a balanced policy approach to intimate partner violence.

Leigh Goodmark is a professor of law at the University of Maryland, Baltimore.