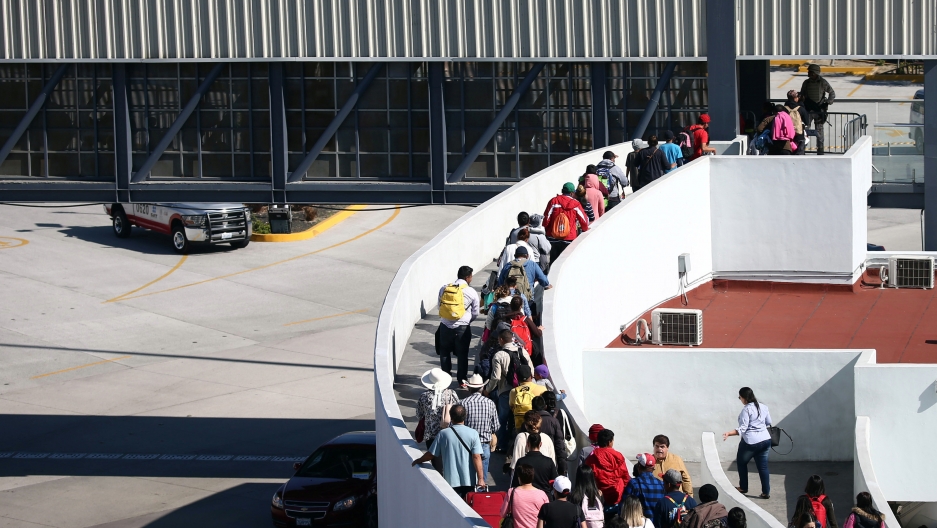 Members of a caravan of migrants from Central America, particularly from Honduras, Guatemala and El Salvador, approach the US border and customs facility in Tijuana, Mexico, in early May.

The photos on Naomi’s cell phone tell a gruesome story: shriveled and discolored skin on her now 8-year-old son’s left-hand.

She said he suffered third-degree burns when her former boyfriend threw a pot of hot oil at her, but it scalded her son instead. This happened back home in Honduras, when the boy was 4. The mother asked us not to use her real name in order to protect her identity while she seeks asylum.

"It's something I'm going to remember my whole life," Naomi said, adding that she feels guilty about her son's injuries but knows they are not her fault.

The injuries were so serious, she said, her son needed to spend six months in hospitals recovering from infections and required skin grafts on his hand, arm and back. When she and the boy went back to their hometown and moved in with her mother, she said the same partner — who had previously beaten and sexually assaulted her — tracked her down.

"He showed up with a gun. He was threatening my mother," she recalled. "He was demanding that I go back with him or else." 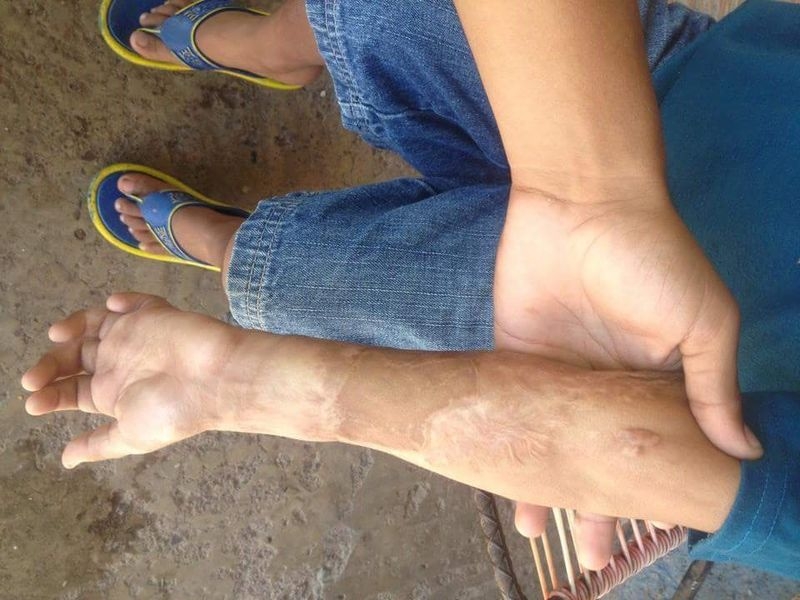 Naomi, who is seeking asylum in the US, said her son's hand, arm and back were disfigured after her ex-boyfriend in Honduras threw hot oil at her and burned the child instead.

Naomi fled to Mexico and said she paid $3,000 to reach the Texas border. She couldn't bring her son because of his fragile medical state, but she planned to retrieve him after winning asylum.

That has taken a long time.

Naomi's case is complicated because she has moved around a bit, staying with different cousins before settling in New York. She had a hard time finding a lawyer and the immigration courts have a huge backlog. Finally, after five years in the US, she hoped to attend a hearing in March, but it was suddenly postponed with no new date scheduled. Now, she fears her case may be in jeopardy because Attorney General Jeff Sessions is considering whether domestic violence victims should qualify for asylum.

"We’ve had situations in which a person comes to the United States and says they are a victim of domestic violence, therefore they are entitled to enter the United States" Sessions told Phoenix radio station KTAR in May. "Well, that’s obviously false, but some judges have gone along with that."

Sessions is now considering whether judges should find domestic violence victims eligible for asylum. He is reviewing a case very similar to Naomi's and has called domestic violence “private criminal activity” by individuals, questioning whether such cases are the same as more typical asylum cases involving government persecution.

But immigration lawyers say that misses the point. Domestic violence victims can currently win protection because they are considered members of a particular social group: women who are attacked by spouses and partners, but cannot get help from their governments.

Naomi claims she called the police in Honduras about her boyfriend’s abuse, but they wouldn’t take her reports. Her attorney, Michelle Martinez of Central American Legal Assistance, said that’s common in countries where the authorities are controlled by gangs and drug dealers.

"She did suffer domestic violence from a horrific individual, but the police in her country did nothing to protect her," she explained. Without police reports, Martinez said she would rely on Naomi's testimony, a psychological report finding she suffers from posttraumatic stress disorder, photographs and medical records, plus the well-documented conditions victims of domestic violence face in Honduras.

As attorney general, Sessions cannot change US asylum law on his own. But he can change how judges determine who qualifies because he controls the immigration courts, which are part of the Department of Justice. Depending on how he rules in the domestic violence case he is now considering, immigration judges will have to follow his precedent.

More than 100,000 asylum cases were filed nationally in the last fiscal year, according to the Executive Office for Immigration Review, a branch of DOJ. There is no breakdown for how many cases involved domestic violence.

Hear: The World’s Marco Werman speaks with Michael Hethmon, an attorney with the Immigration Reform Law Institute, a firm that seeks to counter immigration increases. Hethmon says domestic violence is "private criminal actiity," and thus doesn't fit in with the definition of a "refugee." "Our goal is a sustainable immigration policy which recognizes in environmental terms, both social and political, the carrying capacity of the United States," he says.

The World’s Marco Werman speaks with Michael Hethmon, an attorney with a firm seeking to counter mass immigration about what advice he would give to US Attorney General Jeff Sessions on asylum.

But Bryan Johnson, an immigration lawyer in Long Island, New York, said restricting asylum would amount to "a slaughter," by sending many immigrants back to certain death in their home countries. "If Jeff Sessions changed the law to say that nobody who is a victim of private criminal activity can qualify for asylum, it would disqualify over 90 percent of our clients from asylum and they would have nothing else to fall on," he stated.

If Sessions does move to limit asylum, an immigrant could take their case to federal court. But the attorney general is changing the immigration courts in other ways. He’s already made it harder for some immigrants to get asylum hearings to begin with, and he’s also planning to implement a quota system to make immigration judges work faster.

Asylum cases are generally difficult to win in the US, but they stand their best chance in New York. At the immigration court in Manhattan, judges granted asylum in 85 percent of all cases, according to 2016 data from the Justice Department. Former immigration judge William Van Wyke granted asylum more than 80 percent of the time before retiring in 2015, according to the research group TRAC at Syracuse University.

"I felt a legal obligation as a judge to hear the human being behind the words that were being spoken, and literally to empathize," he said. 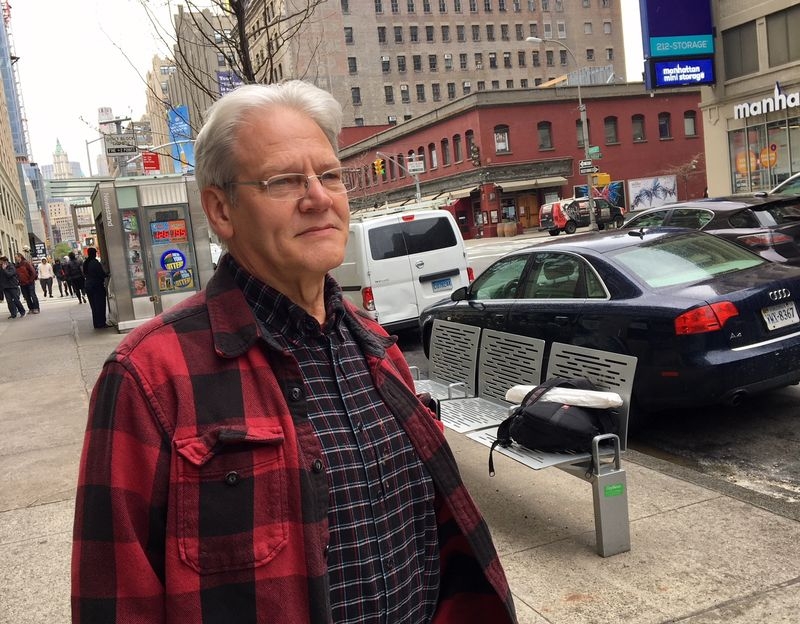 William Van Wyke is a former New York immigration judge. He granted asylum more than 80 percent of the time before retiring from the New York bench in 2015, according to the research group TRAC at Syracuse University. "I felt a legal obligation as a judge to hear the human being behind the words that were being spoken, and literally to empathize," he said.

Van Wyck actually represented immigrants before he was first appointed as an immigration judge more than 20 years ago. The judges are a mix of public, private and government attorneys. They include many who previously worked for the Department of Homeland Security arguing against immigrants' claims.

Not all of New York’s 30 or so immigration judges grant asylum as often as Van Wyck did. Four granted it in fewer than 50 percent of cases between 2012-2017, closer to the national average of 47 percent, according to TRAC.

But it's not just a judge's background that plays a role in an asylum decision. Data show immigrants from different countries have different success rates. And immigrants in New York usually have lawyers who can make a strong case. Almost two thirds of immigrants had attorneys during the last fiscal year, according to TRAC, the highest representation rate in the country.

"This person may be sincere and telling it from the heart what they lived through," he said. "The person may be echoing what some friend of theirs said in a successful case or what they heard from somebody they ought to say."

Sorting that out takes time, he said, which is why he opposes any effort by Sessions to limit who qualifies for asylum.

Johnson, the immigration lawyer, also worried about his other clients who were victims of what Sessions may consider to be "private crimes" — LGBTQ clients who were beaten because of their sexual identity and those who were coerced into joining gangs. Johnson also represents a teenage gang informant, using the name Henry, whose case has garnered attention.

President Donald Trump has cited gang violence by MS-13 as a reason to restrict immigration — a message he reinforced during a visit to Long Island on Wednesday, and another visit there last year. Republican State Sen. Phil Boyle from Suffolk County said he shares the president's concern about who’s entering the US. But when it comes to changing who can qualify for asylum, Boyle said that’s better left to Congress, not the attorney general.

"The one thing I do agree with Mr. Sessions on, I think these decisions on asylum need to be expedited," said Boyle. "Some of them languish for far too long. But there are other ways to expedite the process than to unilaterally change the rules."