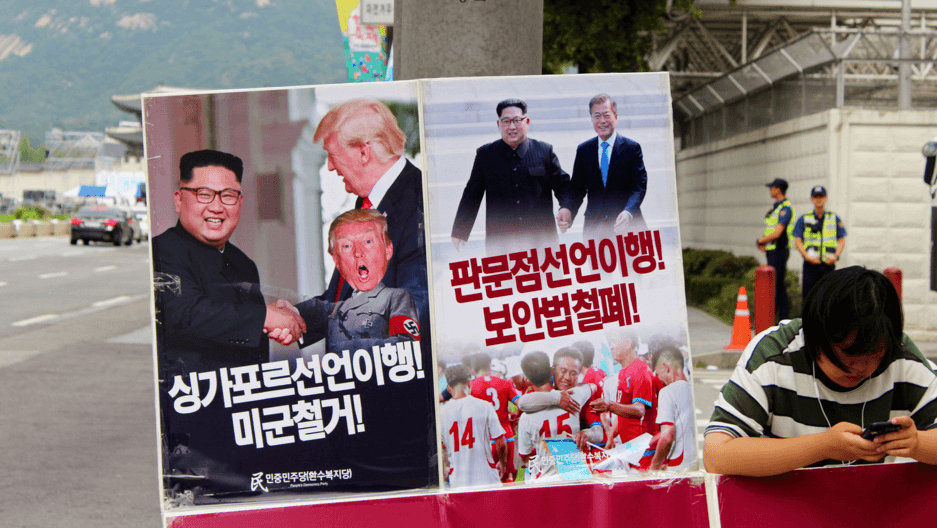 A woman rests on protest signs calling for the US military to withdraw from South Korea and for the end of South Korea's National Security Act on Sept. 19, 2018.

Not only did Moon deliver a speech about reunification to a stadium full of 150,000 North Koreans — the first time a South Korean leader has ever addressed Pyongyang citizens directly — but he brought home a plan to increase family reunions and welcome Kim Jong-un to Seoul.

“This is totally unprecedented,” said Peter Ward, a former researcher for the Asan Institute and a Seoul-based columnist for NK News. “I mean, this is the South Korean president giving a speech in front of a huge crowd of North Korean people and saying things like, ‘We’re building a new fatherland.’ We live in very exciting times.”

Related: More visitors are coming to the DMZ amid thawing relations with North Korea

In Seoul’s Gwanghwamun Plaza, clusters of pro-peace demonstrators camped out with signs wishing Moon luck. A few called for the US military to withdraw from South Korea, stating that peace had already been achieved. Others held signs demanding the end of South Korea’s National Security Law, which gives the government grounds to persecute speech deemed too “pro-North.”

Gigantic outdoor TV screens played live footage of the event, Kim Jong-un’s larger-than-life face looming over the city in technicolor. Behind one such screen, pedestrians rested at a picnic table modeled after the one Kim and Moon sat at in the first inter-Korean summit in April. 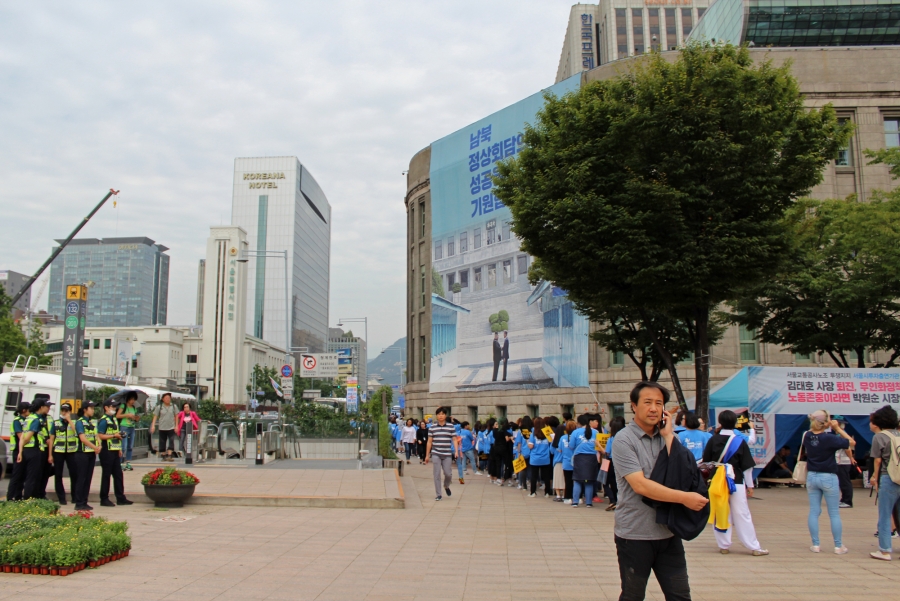 A man walks by Seoul City Hall, which shows a banner of Kim Jong-un and Moon Jae-in shaking hands.

But there were noticeably fewer people hanging in the streets on the day of South Korea’s third summit.

Yu Tae-kyoon, a retail store worker from Seoul, pointed to pro-peace slogans on nearby lamp posts. Nearby, a massive banner of Kim and Moon shaking hands hung down the side of City Hall.

“I think South Koreans hope that we finally achieve true, improved relations with the North,” he said. “It’s like what the signs [and banners] around town say: We want ‘a new, peaceful future.’”

At the end of the summit, Kim Jong-un sent Moon off with an expensive parting gift: two tons of rare mushrooms to enjoy during Korea’s upcoming autumn harvest festival, Chuseok. But certainly, the real treasure lies in the potential to lock down lasting peace.

If all goes as planned, North and South Korea will submit a joint bid to host the 2032 Olympics, remove 11 guard posts from the DMZ and — most surprisingly — set up video conferences for divided families to reunite. (In the past, reunions were so rare that South Korean families had to win them through a lottery system.)

“The family reunions speak to both side’s willingness to really change the nature of their relationship,” said Jenny Town, a research analyst at the Stimson Center and managing editor of the analysis site 38 North. “North Koreans don’t necessarily see [reunions] as a high priority, so for them to allow this and think about ways to extend it, I think it shows how far they’re really willing to go — and how different from the past they’re willing to be.”

However, some of the biggest promises from the summit remain incredibly vague. Kim Jong-un agreed to invite “international observers” — whatever that means — to watch him shut down the Tongchang-ri missile facility, for example. Meanwhile, both nations agreed to hold a groundbreaking ceremony for an inter-Korean railway system before the end of 2018. However, South Korean aid to build the train network would violate international sanctions.

“It’s not really clear what this means. Is it just a symbolic ceremony, or are they actually going to start working on the rail network?” Town said. “Because if they’re actually working on [building] it, then they could really ruffle some feathers.”

North and South Korea could be entering a new, never-before-seen era of peace. But it’s hard to tell — and some South Koreans are still reluctant to believe it.

“Considering that North Korea has failed to keep up its promises in the past, I think we need to focus on their actions — not just be rendered drunk by their and talk of peace,” said Kim Joo-hyung, a college student from Seoul.

In this latest summit, North Korea made a promising step toward denuclearization: an offer to dismantle its Yongbyong Nuclear Facility. But Kim Jong-un also made it clear that the dismantlement hinges on whether the United States takes “corresponding measures” — in other words, concessions — to show its good faith.

That could be a serious problem if the US doesn’t change tactics. So far, President Donald Trump has generally maintained that he won’t be making concessions until the North shows it’s serious about denuclearization. Yet North Koreans believes they’ve offered plenty of proof.

“I do see a gradual, step-by-step removal of the nuclear program in progress. North Korea is making a real effort,” said C. Harrison Kim, an assistant professor at the University of Hawaii at Manoa who studies socialism in East Asia and North Korea. He believes the US should consider giving North Korea a formal security assurance, or even loosen the hardline UN sanctions policies.

“A peace agreement would not take major effort from Washington. All [the US] has to do is sign a document,” Kim said. “But I think the more pressing issue is lifting the sanctions. I think North Korea feels that is a necessary part of engagement from the United States.”

So far, the US response has been lukewarm. Trump tweeted that the summit’s results were “very exciting,” but he has yet to offer another meeting with Kim Jong-un. Trump canceled a recent meeting planned between Secretary of State Mike Pompeo and North Korean officials, partially citing a lack of satisfactory nuclear progress. Pompeo said he would meet a North Korean official in New York, but Kim Jong-un wants to skip the working-level talks and chat with Trump directly.

“I think Pompeo is offering a minor snub by not talking immediately about a summit,” Ward said.

For now, the Korean peninsula is left to wait. Kim Jong-un’s potential visit to Seoul would make history, but one has to wonder how far North and South Korea can move forward without the US on board.

Nevertheless, “the symbolism of all this — it’s really big. I feel very emotional about it myself,” Ward said. “This is a very significant moment in Korean history.”