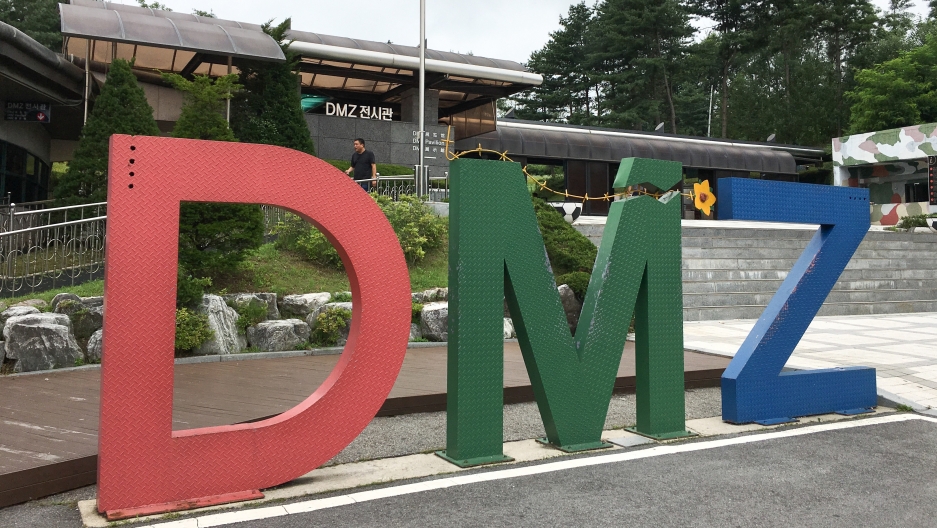 A sign outside of the "Third Infiltration Tunnel" at the DMZ, where visitors can enter a tunnel allegedly built by North Korea to launch an invasion of South Korea.

The border between North and South Korea is one of the most heavily guarded in the world. Separating the nations is the Demilitarized Zone — the DMZ. It’s a 150-mile-long, and 2.5-mile-wide swath of land that neither side occupies. It’s both a potential conflict zone and a tourist destination.

As relations thaw between North Korea and South Korea, visitors are flocking to the DMZ for a glimpse of what may soon be a relic of the past.

“Customers have increased, thanks to the peace talks, foreigners and Koreans alike,” said Song Jeong-hee, who sells jade, fake North Korean money and North Korean ginseng liquor at a shop in a parking area next to the DMZ. She’s been working at the gift shop for 30 years. 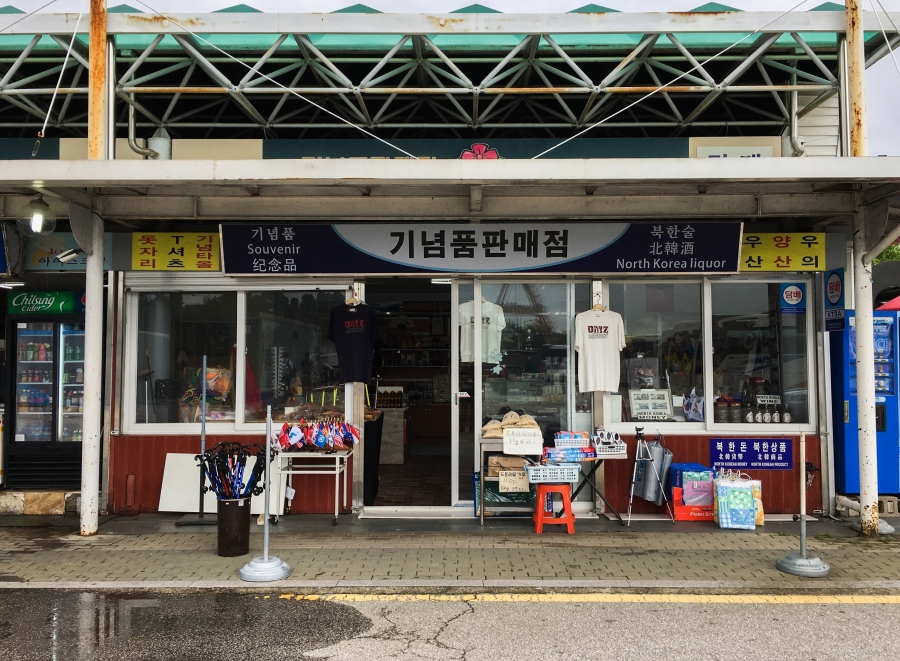 A gift shop run by Song Jeong Hee, who has sold souvenir's at the DMZ for 30 years. Inside you can find fake North Korean currency, jade trinkets and T-shirts that read "DMZ Since 1953."

Korean pop music plays at another gift shop and across the parking lot is a theme park with bumper cars and other rides you'd find at amusement parks. There are snack shops with corn dogs, slushies and even fried silkworms served in paper cups.

It’s not the first thing you’d expect to see after driving through an armed checkpoint where soldiers board the bus to inspect passports. It looks more like a theme park than a memorial to the Korean War, which dragged on for three years and left nearly 3 million soldiers and civilians dead.

Since a ceasefire ended the Korean War in 1953, there have been several border skirmishes and shootings. Prison-style guard towers and two layers of barbed wire fence dotting the landscape. Defectors from either side who attempt to cross are typically shot. Last November, North Korean soldiers fired on a fellow soldier who crossed the border into South Korea.

So, visitors can’t just stroll into the DMZ. You need to join a government-sanctioned tour.

One of the most popular things to do in the DMZ is to go inside what’s called the “Third Infiltration Tunnel of Aggression.” It’s one of four tunnels discovered by the South Korean military that runs from North Korea into the DMZ. Officials believe this third tunnel, discovered in 1978, was built to allow 30,000 North Korean soldiers to launch an invasion.

Related: On the anniversary of the Korean War, renewed hope emerges

Today, visitors can enter the tunnel either by riding a rollercoaster-like car on a track 265 meters underground or walk down a ramp. Inside, the walls are black — allegedly covered with coal dust so the North could deny it was built to launch an invasion and argue it’s simply a coal tunnel.

The ceiling is low, and visitors are urged to wear a hard hat. The end of the tunnel is boarded up but has a small window, which visitors are told looks into North Korea.

“We presume there are more hidden tunnels — over 10 — but we [are] still looking for that tunnel now,” said Kim Su-yeon, a DMZ tour guide. 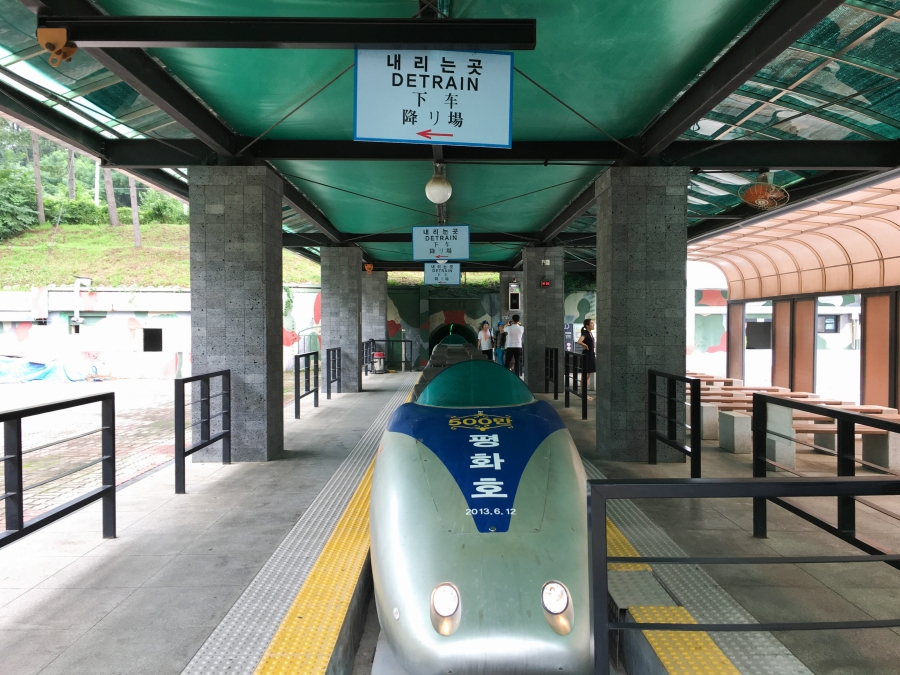 A small train takes visitors several hundred feet underground to see the "Third Infiltration Tunnel." It is one of four tunnels discovered by South Korea, allegedly built by North Korea to launch an invasion of South Korea. This tunnel is reportedly large enough to allow 30,000 fully armed soldiers to travel through.

After the tunnel, visitors are ushered into a small theater next door where they are required to watch a video. The scenes of explosions and newsreel footage of crying families and dead bodies is a reminder of the South’s tense relationship with the North. But the film also reminds viewers that, not too long ago, Korea was one nation and it could be again.

“Korea has overcome the pain of war and achieved miraculous economic growth. And another miracle that we must achieve as we pursue harmony and coexistence, unification."

Before leaving the DMZ the train stops at a station that looks like a Hollywood set. The Dorason Station, opened in 2014, is bright and airy with its own bustling gift shop.

One train arrives here from Seoul every day. For now, this is the northernmost stop on the line.

Posted on the wall is a giant map of a route that doesn’t currently exist— from Seoul, through North Korea to China and on to Russia.

South Korean guards in camouflage and black helmets stand in front of an entrance to the tracks where the lights are off. Tourists line up to take pictures in front of a train sign that reads "To Pyeongyang (the capital of North Korea spelled using a southern dialect)." Some make little hearts with the fingers. 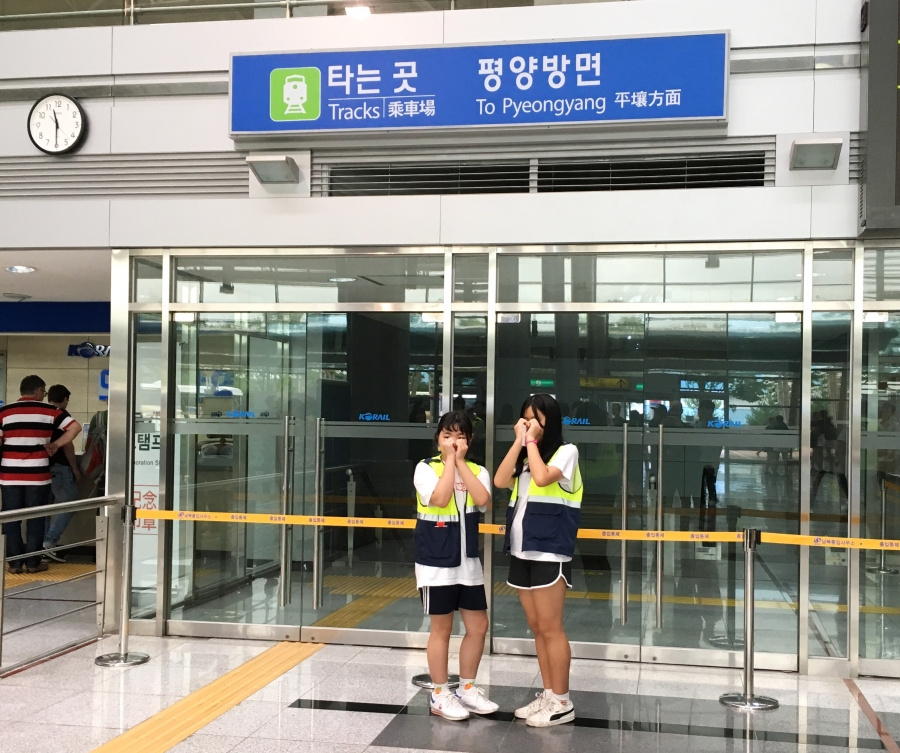 Tourists pose for photos at the Dorasan station where trains from Seoul arrive once a day. A sign above the entrance reads "To Pyeongyang" (spelled using a southern dialect). Some day, trains may run from Seoul through North Korea and on to China and Russia.

It’s the closest most South Koreans have ever gotten to their neighbors in the North.

One of them is Kim Cho-long, 29, who is on a tour with her company. She believes unification is possible. But on this day, she just wants to learn more about the history and see what it’s like at the DMZ.

Tourists from China and Russia have reportedly been flooding North Korea to get a glimpse of the DMZ from that side. But earlier this month the North’s leader, Kim Jong-un, blocked all tourist visas until after the 70th anniversary celebration of his country's birth on Sept. 9. After that, another round of talks between the North and South are scheduled, possibly bringing the nations a little bit closer to each other.

Reporting for this story was made possible by a fellowship from the East-West Center and the Korea Press Foundation.