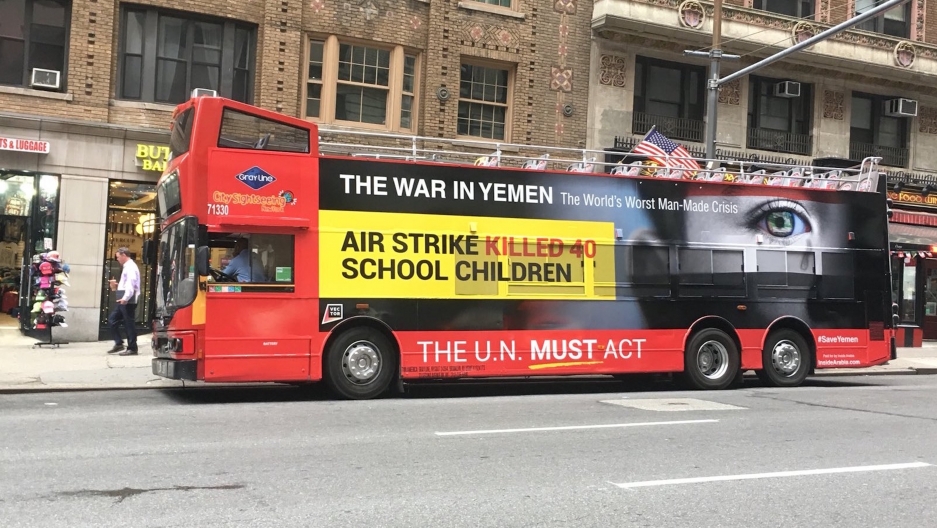 A New York City tour bus is part of an outdoor advertising campaign during the UN General Assembly meeting to raise awareness about the war being fought in Yemen.

Courtesy of Inside Arabia

A media group based in Washington, DC, launched an ad campaign this week in New York City that targets an exclusive audience: World leaders in town for the 73rd United Nations General Assembly. The goal? An end to the war in Yemen.

"This is a body that has the power, the resources, the influence to work to stop this war," says Elisabeth Myers, whose publication, Inside Arabia, is behind the campaign. Provocative images and messages are being shown on billboards, kiosks and on some of Manhattan's bright red double-decker tour buses.

The #SaveYemen graphic combines the face of a Yemeni child with messages about the Yemen war.

Courtesy of Inside Arabia

"Looking out from the back of a bus is the eye of a Yemeni child," Myers says. Inside the eye, if you look closely, she says, is the reflection of two flags: the Saudi flag and the Emirati flag.

Saudi Arabia and the United Arab Emirates, which receive support from the US for their military operations in Yemen, have been at the center of the conflict. On the side of the bus, along with the picture of the child, is this message: "The war in Yemen — the world's worst man-made crisis." The bottom of the ad implores the UN to act.

The United Nations Special Envoy for Yemen, Martin Griffiths, has been trying to restart negotiations between the warring parties, most recently at a meeting in Geneva that Yemen's Houthi rebels did not attend. For the past month, Myers’ publication has been posting articles outlining issues in the Yemen war. Myers, who is editor-in-chief of Inside Arabia, says there will be six different ads while the UN is in session.

"Each particular graphic has a different caption, so one will show that there are 11 million children on the brink of starvation right now," she says. "Another will show that there were 68 civilians killed in one airstrike. In another airstrike, there was a school bus targeted with 40 children on it. So the image is stark and beautiful and tragic all at the same time, and the words are devastating."

The campaign for #SaveYemen is a hit in #NewYorkCity to stop the #war that is happening and save #Humanity. pic.twitter.com/h2p3mA1F49

Myers says the campaign is not cheap. "It's about a half a million dollars to do all of this. Primarily those huge billboards are expensive, kiosks all over the place. Plus it's New York City. Plus the UN General Assembly is in session," she says. "So all of these things drive up even the normal cost."

"Inside Arabia," founded by Jordanian American businessman Saeb Sakkijha, launched three publications this year from an office just a few blocks from the White House. To date, says Myers, its operations have been self-funded. "We are ... in the process of seeking Section 501(c)(3) nonprofit status. Accordingly, we receive charitable contributions." She says the group is independent and "not affiliated with any government or any country."

Myers wants Americans to pay closer attention to Yemen, and she says the New York City campaign is already succeeding.

"I think people are noticing and they're reacting. And I just hope that the reaction is not just like 'oh, you know, here's another crisis that's not in our part of the world, you know, not much I can do about it.'  But actually there is."

Myers notes that grasroots support has encouraged some members of Congress to debate the US role in the Yemen war.

"I hope also that there can be some pressure from public opinion, including in this country, because the bombs that are being dropped on the civilians are made by US companies."

Myers says the Yemen war has gone underreported outside the Middle East. And she says world leaders — from Saudi Arabia to the UAE, the US, the UK and Iran — have been able to dodge uncomfortable questions about their countries' involvement in the war. The intention of the campaign is to put the issue, basically, in their faces.

"It's buses, billboard trucks. We have kiosks on the street that you walk by and you see the graphic, and we also have the huge billboard down on 7th Avenue and 34th Street. This is one of the busiest intersections in New York City."

The UN General Assembly is in session through the beginning of October. There will be ample opportunity for people in New York — and leaders from Riyadh, Abu Dhabi, Washington, London and perhaps Tehran — to be reminded of the Yemen war while stuck in traffic behind a big red bus.