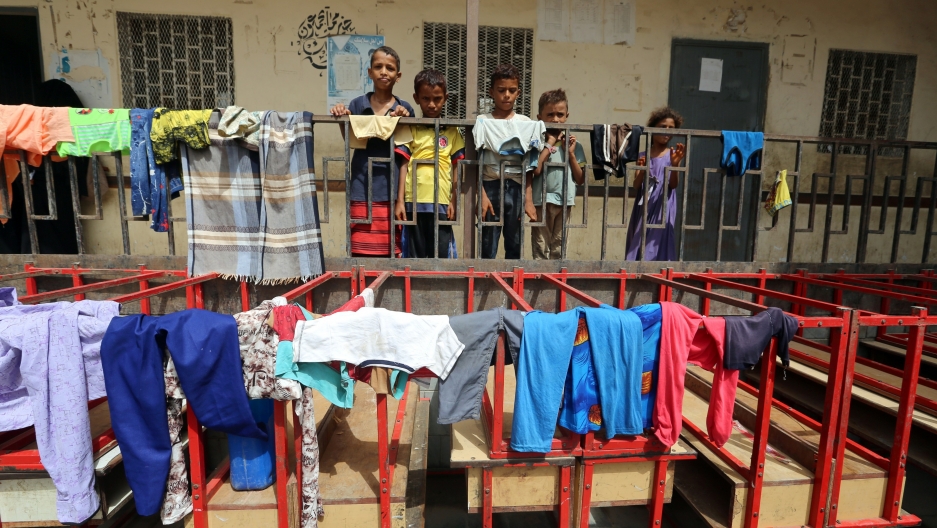 Children stand behind a fence at a school to which they have been evacuated from a village near Hodeidah airport amid fighting between government forces and Houthi fighters in Hodeidah, Yemen, June 17, 2018.

A key battle to capture a seaport in Yemen is entering its second week, as residents and humanitarian workers worry fighting could soon reach civilian neighborhoods.

Yemeni troops, backed by the United Arab Emirates and Saudi Arabia, claim to have captured an airport just south of the city of Hodeidah. And inside the city center, residents can hear explosions from airstrikes, artillery and mortars.

One resident says the rebels who control Hodeidah — the group Ansar Allah, also known as the Houthis — are literally digging in for the fight: They've torn up some city streets to construct roadblocks. The excavations have broken pipes and interrupted water supplies in some neighborhoods.

This tweet says, "The Houthi are messing with the infrastructure and destroying the water system."

People in Hodeidah are frightened that the battle will soon be taking place outside their homes. And so is Robert Mardini, the head of Middle East operations for the International Committee of the Red Cross. "We know that we are talking about asymmetrical warfare in a densely populated area," says Mardini. "There is a potential for grave humanitarian problems."

Mardini says capturing a city of 600,000 people is no small battle. And some Hodeidah residents are already suffering.

"This happens against the backdrop of an already dire situation," he says, "and any intense fighting inside Hodeidah city would exacerbate an already catastrophic humanitarian situation."

Related: Residents of Yemeni port city prepare for an invasion

On Tuesday, Mardini's organization was placing food packages around the city to prepare for the worst. Fighting could make it hard to deliver them later.

The World Food Program is doing the same thing, and it has three supply ships standing by offshore.

"The three ships are carrying 75,000 tons of wheat grain. That is enough to feed 6 million people for one month," says Abeer Etefa of the WFP. She says her Hodeidah team is getting ready for the long haul. "We also have prepositioned 1.2 million litres of fuel in Hodeidah to be used for all other agencies to support hospitals, clean water facilities in Hodeidah governorate."

Aid groups talk about Hodeidah as if the worst is about to happen. They have been planning for a crisis, positioning supplies, all with the aim of minimizing harm to civilians.

'A military and humanitarian operation fused together'

Countries spearheading the campaign to wrest Hodeidah from the Houthi rebels also use humanitarian language as they discuss their military objectives.

"It is both a military and humanitarian operation fused together," says Yousef Al Otaiba, the UAE ambassador to the United States. "It's not one or the other."

The UAE and its coalition partner Saudi Arabia have pledged millions of dollars in aid for Yemen. "It's in our interest for the people to be well taken care of," he says. "If there was no war in Yemen we would still be providing a significant amount of aid."

And, as Otaiba tells it, the UAE-led military campaign has been a humanitarian success.

"If you look back and see the areas where the UAE — and Yemeni forces with UAE assistance — have taken space from the Houthis in the last six or eight months, I think you will find a consistent pattern that, wherever that area has been removed from Houthi control, [the] humanitarian and security environment has improved."

Related: US stands by as Saudi coalition begins assault on Yemeni port city

"The situation is deteriorating further," says Caroline Seguin, program manager for Doctors Without Borders, which staffs the one hospital in Mocha. This Red Sea port city south of Hodeidah was secured by the UAE-backed Yemeni government over a year ago. But the hospital does not have an operating theater, and it remains overwhelmed with war-wounded patients.

"Needs for the general population are huge, and the lack of humanitarian actors within the area of Hodeidah may have strong humanitarian consequences on the population" says Seguin. "We receive patients on a daily basis from the front lines, more and more, in critical condition when they arrive. And we receive only the survivors. We don't receive the ones that are dying on the way because of the lack of health facilities and medical care near the front lines"

Every day since clashes began in May, teams in Aden receiving patients coming from Hodeidah. People are driving at least 6 hrs.

Before reaching Aden, civilians injured on the front lines evacuated to the one hospital in Mocha (110 miles south of Hodeidah). It doesn't have an OT

Other observers in Yemen have seen that people internally displaced by the fighting (IDPs) must travel five hours south from Mocha for surgery. Some never make it.

"So it's quite a complicated situation," says Seguin. "Seeing the intensity of fighting and the critical conditions in which patients are arriving, we are very worried about the plight of civilians during the battle of Hodeidah."

Hanadi, an aid worker who assists IDPs and whose home is in central Hodeidah, said that while she is not a Houthi supporter, she doubts that those who would liberate Hodeidah will look after civilians displaced by the fighting.

"I think if they care much about people here they have to support the refugees," says Hanadi, who asked that we only use her first name because of security concerns. "There [are] many people killed. They don't help us at all. But we are silent [because there is] nothing [we] can do."

Abrar, a 19-year-old whose family lives near the coastal area, which is expected to see heavy fighting, has been staying indoors since the military operation began on June 13. The next night was Eid al-Fitr, the holiday celebration after a month of Ramadan fasting. But Abrar, who also asked that we only use her first name, did not go out with her friends. "I baked a cake," she said.

Despite urgent calls for negotiations, residents in Hodeidah told us they fear that none of the fighting forces are willing to give in. Not just the Houthis. But also forces from the United Arab Emirates. Saudi Arabia. Sudan. Plus Yemeni groups with many competing interests.

Military sources in the United Arab Emirates told @BBCBreaking that a major force of #Yemen , #UAE  & #Sudan troops is on standby in #Eritrea  to take part in a final push to retake #Hodeidah port from pro #Iran  #Houthi rebelshttps://t.co/g5GRx9OuUm

The ICRC's Mardini urges all sides to observe the rules of war  — and protect civilian lives. "We hope, of course, that a negotiated solution will be found for Hodeidah to avert a catastrophic scenario. I mean we have seen, in the region, fighting in places like Mosul, Raqqa, Homs, Aleppo [that] had a devastating impact on the life and livelihoods of people. And we hope that parties to the conflict will find a solution that would avert such scenarios to materialize in Hodeidah today."

Abrar's family has chosen to leave town, she told us via WhatsApp, joining thousands of other Hodeidah residents displaced by the war.

Hodeidah resident Abrar posted this message on Tuesday, June 17, as her family prepared to leave their home in the city center.