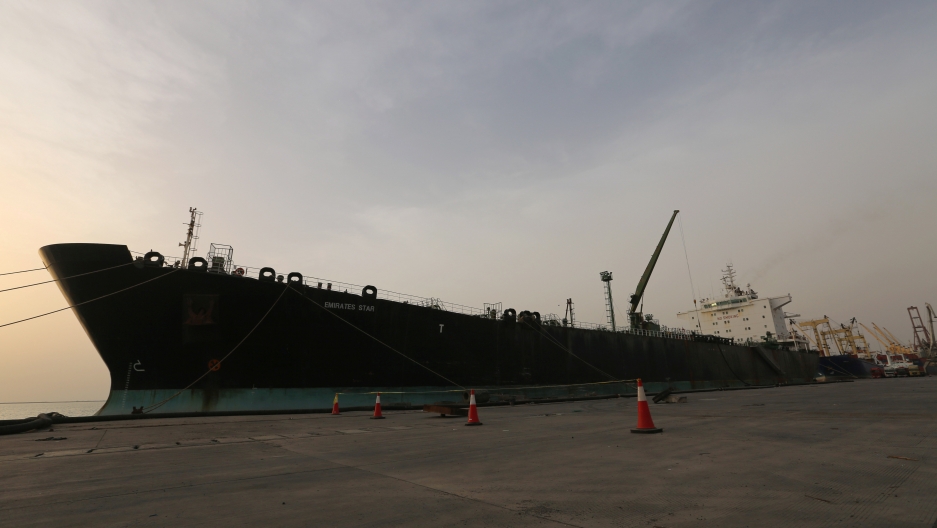 News over the weekend that the Trump administration was considering expanding the US role in the Yemen war may have been premature.

A National Security Council spokesperson on Monday denied reports that the White House was weighing whether to directly assist a possible Saudi-led coalition invasion of Yemen's Red Sea port of Hodeidah.

“Reports of a meeting today were erroneous," the spokeperson told The World. "The White House does not issue statements about internal policy deliberations.”

The denial adds to confusion over a military campaign, well in progress, to drive Houthi insurgents from Hodeidah. The port has been the entry point for much of the country's imported wheat and fuel, as well as for international humanitarian aid. It has also been an important source of tax revenue for the Houthi rebel government that still holds key cities in the Yemeni north, including the capital, Sanaa.

People began fleeing rural areas of Hodeidah, a region larger than Connecticut, earlier this year as fighting forces approached from the north and south. Now as the war has reached to within a few miles of Hodeidah City and its deep-water port, residents are making plans to leave, or they are stocking up on food and fuel to survive a siege.

"We buy new things like wheat, sugar, and salt and oil," said Hanadi, a Yemeni aid worker who spoke to The World via WhatsApp Monday. (She asked that we only use her first name because of security concerns.) She's taking her lead from friends who survived the siege of another Yemeni port city, Aden, in 2015. "There wasn't enough food," says Hanadi. "They couldn't eat for two days." Municipal services such as water and electricity were interrupted in Aden.

"So we are providing our home [in Hodeidah] with light, with wheat, sugar, salt — everything that we need."

Supplies and services aren't the only concerns. Hanadi says ethnic divisions in Hodeidah are aggravated by the approach of government forces. "We don't talk with our neighbors about the security situation," she says, "because most of them are Houthis."

The Houthi occupation of Hodeidah followed the swift capture of other northern Yemeni cities in a coup that overthrew the government in 2015. Since then, the ousted Yemeni government — ruling in exile from Riyadh, Saudi Arabia — has threatened several times to retake the Hodeidah port. This time, the threat of invasion is real.

Forces representing several factions allied against the Houthis have been fighting their way through the Hodeidah countryside. Houthi and Yemeni sources told Reuters that the United Nations' special envoy for Yemen, Martin Griffiths, has been speaking with the Houthis in Sanaa in hopes of reaching a peaceful resolution to what is sizing up to be an all-out battle for Hodeidah.

A #UAE-backed Yemeni offensive secured the main road to al #Hudaydah. The UAE has requested direct support from the U.S. & pledged not to seize the port without backing from Washington. #Yemen https://t.co/AqXtio1DmX pic.twitter.com/STXBVCvxOq

A pro-government TV report claims troops are at the outskirts of Hodeidah City.

"The very rapid advance to Hodeidah was indeed much easier than expected," said Michael Knights, a security analyst at the Washington Institute for Near East Policy, a conservative think tank. "Had the coalition exploited into the port and city immediately, they might already have many facilities in their hands. However, instead they paused for political reasons. This has given the Houthis the space to recover from shock and reinforce and deploy new minefields. This is a shame."

Houthi security in Hodeidah City has tightened, says Hanadi, following airstrikes by Saudi-led coalition planes over the weekend. "People feel scar[ed]," she says, "and we see that military vehicles [have] covered all the street[s]."

Hodeidah businessman Abu Yeslam, who also asked that we not use his real name, says residents have mixed feelings about the advance of government troops on their city.

"They were happy," Yeslam says. "At the same time, they are afraid because [with militias] approaching and liberating Hodeidah city from Houthis, [there] might be a very strong conflict."

Hanadi has heard similar concerns. "My family says that we have to move, because the news is very bad and most people travel to their villages," she says. "Our neighbors here travel [south] to Aden. Many of them we see travel [north] to Sanaa, [including] my uncles and my cousins. All of them travel because they feel that that is a scary moment in Hodeidah."

"It is very difficult now to live like normal," says Yeslam, who works for an import-export business near the Hodeidah seaport. "For example, now whenever I go to work by my car I get checked at each Houthi checkpoint. It is troubling. They stop me, they check my car, they check my bag and everything in the car. Every day [is] like this."

Knights is concerned that delays could prevent a promising strategy from driving the Houthis from the port. "The negative scenario," he says, "is that internationals only bring pressure on the coalition to halt — and none on the Houthis to leave Hodeidah — and that Yemeni resistance forces move forward on their own to liberate the city in a more chaotic manner."

Knights believes that Hodeidah can be secured by a coordinated effort: "There are good plans and good capabilities set against all the military and humanitarian tasks in the Hodeidah operation, so there is plenty of room for optimism. Whether the port gets liberated by military means or demilitarized by international negotiation, it's a positive step."

Yeslam isn't waiting to find out. He's packing up his family and going south to Aden — he says for business — for 20 days.

"I cannot tell you exactly which party's going to win," he says. "But we hope that peace comes back again. We hope things will be settled without any big problems. If the war [breaks] out I think we will delay returning from Aden," he adds. "It will be very risky if I go back to the Hodeidah."

Hanadi vows to wait in the port city and is ready to serve in the wake of an invasion. "I will continue my voluntary work and humanitarian action and I will help as much as I can," she says. "They told us that at the end of Ramadan or after Eid, Hodeidah will be with the Yemeni government. So we hope that."