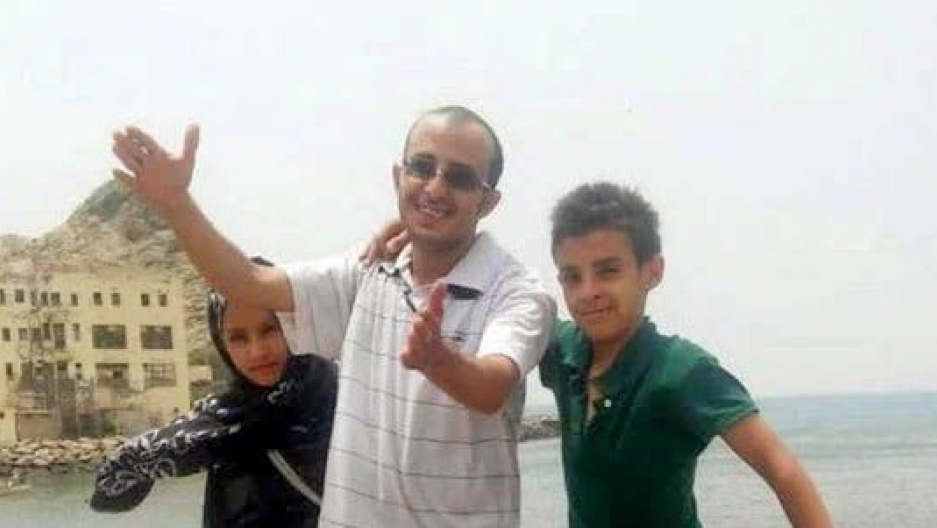 Mahmood Salem and four of his children on a visit to Djibouti in November 2017. Salem's family was approved for visas before Trump took office, but not processed. After the travel ban was announced, the visas were denied.

“There is real pain here,” he said, “there is real suffering. I’m in direct contact with people whose lives have been destroyed.”

Nagi was speaking about the Yemeni community in the US. He recounted story after story of how President Donald Trump’s travel ban has separated Yemeni American families.

One of Trump's first acts as president was to issue, through an executive order, a travel ban to block immigrants and refugees from mostly Muslim-majority countries from coming to the US.

Yemen has always been included in the ban and Nagi has been witnessing the impact firsthand.

Related: Homeland Security decides not to deport 1,250 Yemenis to a war zone

“I just received a call this morning from a gentleman who we’ve been working with for a while,” he said. “His family is in three different parts of the world. His daughter and his wife [are] in Djibouti.”

Djibouti, the small country in eastern Africa, has the closest US embassy to Yemen.

“His older children are with him here in the Bronx, where he owns a cell phone store and he has a little kid that he can’t take care of,” Nagi says. “He’s staying with people in Michigan.”

Nagi goes on: There’s the Yemeni American grocery store owner in New York City whose three small children got visas to come to the US. But their mother didn’t. “Now he’s stuck taking care of the kids and working and paying for the mom who’s not allowed in,” he says.

“You could literally knock on any Yemeni American home and they’d have a story about how their lives have been impacted by the travel ban,” he says.

The travel ban has faced fierce court battles, including challenges brought by the state of Hawaii, among other states, which argued that the ban targeted Muslims and violated constitutional rights. In June, that fight ended in a Supreme Court 5-4 decision that ruled in favor of the government and the latest version of the travel ban, arguing that the ban allowed for exceptions, also called waivers.

“The ban said that there is a case-by-case waiver process through which every individual visa applicant will be considered according to three factors,” says Sirine Shebaya, a civil rights lawyer in Washington, DC.

One, if the applicant can demonstrate they would suffer "undue hardship" if they are denied entry; two,  if the person doesn’t pose a security threat; and three, if granting a visa is "in the interest of the United States."

But immigration lawyers say these waivers are rare.

Shebaya also adds that there is no clear explanation from the government on how the waiver process works.

“It’s become very, very clear that there is no waiver process,” she explains. “People are not getting individualized consideration and they’re not even getting the opportunity to submit documents that would demonstrate that they meet the three criteria outlined in the proclamation for a waiver.”

Shebaya has joined a lawsuit against the Trump administration filed by a group of 36 people whose visa, or that of their relatives, have been denied or held in limbo because of the travel ban.

A State Department official did not answer questions in email from PRI’s The World about criticism regarding the waiver process and the long wait times.

Asked about the number of applicants who have received a waiver, the spokesperson wrote that "as of July 31, 2018, 1,246 applicants from the banned countries were cleared for waivers after a consular officer determined the applicants satisfied all criteria and completed all required processing."

The spokesperson would not provide a total number of people who had applied for a visa from the banned countries during that period, or the number of applicants who were granted a waiver and a visa, as opposed to those who were cleared for them.

Shebaya points out that being cleared for a waiver doesn't automatically mean the applicant receives a visa.

Meanwhile, the stories of families struggling to reunite keep piling up.

Mahmood Salem’s family was stuck in Djibouti for nearly a year.

"He didn’t have a degree or something to work in a good place and to make good money."

Yet Salem remained in Michigan for 14 years, still earning more there than he would in Yemen. He would visit his family as often as he could. Over time, he and his wife had five kids. Three of them became US citizens through their father.

Finally, five years ago, Salem decided it was time to bring his wife and children to the US. He began the visa process. Meanwhile, a civil war broke out in Yemen. There was chaos, food shortages and a cholera outbreak. In 2015, the US shut down its embassy in Sana’a, Yemen’s capital.

"There are airplanes. There is war, a lack of a government,” Nagi says. “It’s like death is awaiting you and if you evade it in one corner, it’s coming to you from the other corner."

Like so many other Yemenis, Mahmood’s wife and children fled Yemen for Djibouti.

But Nagi says the cost of living in Djibouti is skyrocketing. And Salem was already struggling to make ends meet back in Louisiana, where he worked at a grocery store. He would often talk about it with his brother, Mamoon. “[He said], ‘I need a lot of money. I can’t go see them. I cannot take them back to Yemen. I cannot bring them here. What kind of life is this?’” Mamoon remembers.

Mamoon said Salem borrowed at least $7,000 from his brothers to pay his family’s bills in Djibouti.

And his wife and five children waited.

What is upsetting to Salem’s family is that his wife and children were approved for visas less than two months before Trump took office. Their visas weren’t processed. The Trump administration announced the travel ban and the Salem family’s visas were denied.

Lawyer Shebaya says this is happening to many Yemeni families.

"There are dozens of cases that I am aware of where people had been approved for visas or even had their visas stamped in their passports that were then revoked," she says. "This is an ongoing problem, especially for the Yemeni community that’s stuck in Djibouti."

Then, last month, in a video call with his family in Djibouti, Salem found out that his daughter is sick.

“His daughter was in the hospital and they don’t have enough medicine in Djibouti,” Mamoon says. “She had rashes … a lot of red places on her skin.”

A couple of hours after that phone call, Mamoon says, Salem took his own life.

It’s difficult to know what exactly led to his death. But it came just as Salem was struggling to cope with the stresses of his family’s visa situation.

Lisa Fortuna, a psychiatrist who works with refugees in Boston, says that for many of the refugees she sees, their main goal is to bring their families to the US — often away from war zones or refugee camps. It is a desire that the travel ban greatly complicates.

“In the last few weeks, after the ban was upheld [by the Supreme Court], I had a lot of families come in very distressed, very depressed and I think it adds to a level of hopelessness and that becomes a very significant risk factor for suicidal behavior … that there’s not going to be any resolution of the separation from your family,” Fortuna says.

Paul Spiegel, who directs the Center for Humanitarian Health at John Hopkins University, says immigrants and refugees have always been prone to depression and anxiety, often linked to trauma they experienced in their home country or during the journey to the US. There is also the additional stress of starting out in a new country and learning a different language.

“I think what is different now is the uncertainty,” he adds. “The changing of the rules and the laws. The aggressiveness of ICE [U.S. Immigration and Customs Enforcement]. There was more certainty in the past and I think that will exacerbate mental health issues and can even create some mental health issues.”

After Salem’s death, Julie Goldberg, a lawyer with offices in New York City and Djibouti, helped bring attention to his family’s case.

In the end, they were granted visas but not in time to attend Salem's funeral.

Mamoon, his brother, who is taking care of the family for now, said their first days in the US were rough.

"His son started looking around and he cannot see his father."

He said they’re still coming to terms with what happened while restarting a new life in the US without their dad.

If you or someone you know is experiencing suicidal thoughts, text the Crisis Text Line at 741-741 or call the National Suicide Prevention Lifeline at 1-800-273-8255.