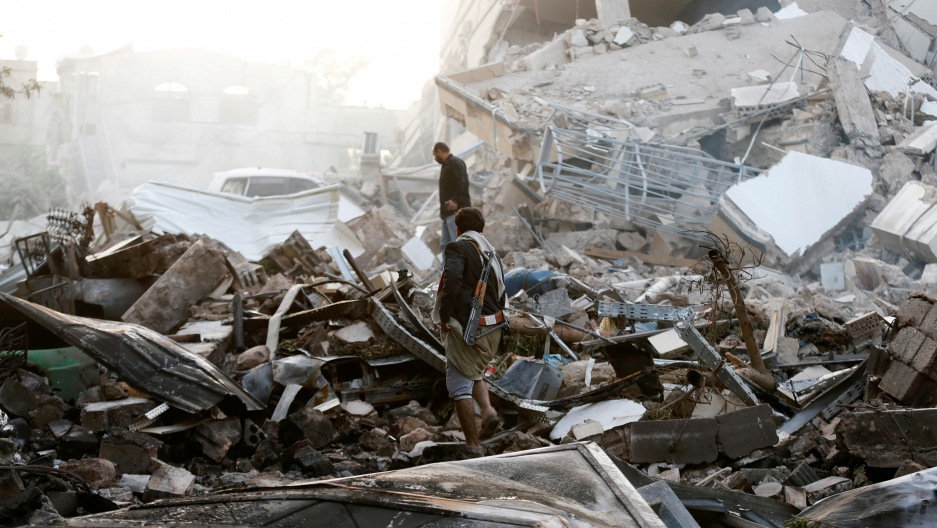 Guards walk on the wreckage of a building destroyed by air strikes in Sanaa, Yemen, on June 6, 2018.

Editor's note: At 1 p.m. ET on July 5, 2018, after this report was filed, Homeland Security announced that it will be extending Temporary Protected Status for people from Yemen. Those immigrants will now be allowed to stay until March 3, 2020. A press release said Secretary Kirstjen Nielsen reviewed conditions in Yemen with interagency partners and determined "that the ongoing armed conflict and extraordinary conditions that support Yemen's designation for TPS continue to exist." The agency will decide whether to extend TPS for about 270 people from Somalia by July 19.

July 5 is the deadline for Kirstjen Nielsen, secretary of Homeland Security, to decide whether to allow Temporary Protected Status for Yemenis to expire. If it’s not extended, the Yemenis working and studying in the United States under TPS will have to leave or face deportation in September.

“To send a Yemeni back to Yemen at this time, it is simply a death sentence,” says former US Ambassador to Yemen Barbara Bodine. She is one of the four former US ambassadors to the country who signed a letter to the departments of State and Homeland Security calling for an extension of the Yemeni TPS program.

With TPS, foreign nationals who are already in the US when the designation is made are eligible to work and travel and to not be detained by the Department of Homeland Security because of their immigration status.

TPS was first offered to Yemenis fleeing their country's civil war in September 2015. Major fighting had just begun. The US had evacuated its military and diplomatic personnel from Yemen and relocated the US Embassy to Saudi Arabia. Yemenis in the US were given the opportunity to apply because, according to the DHS at the time, “requiring the return of nationals of the state would pose a serious threat to their personal safety." 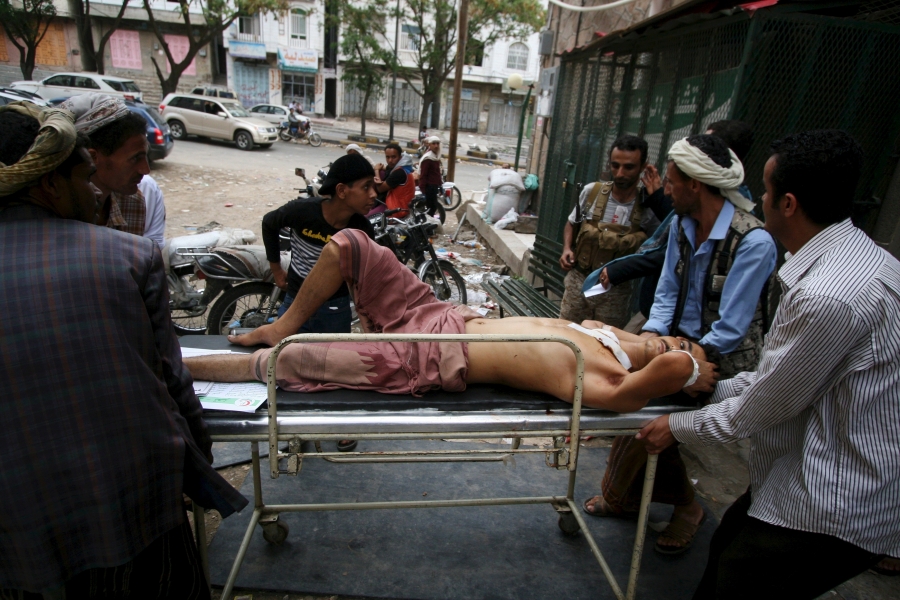 Fighters of the Popular Resistance Committees rush a comrade to a hospital after he was injured during clashes with Houthi fighters in Taiz, Yemen on July 10, 2015.

“The conditions compared to September 2015 are very different,” says Bodine. “They are markedly worse.”

Bodine, who was appointed ambassador to Yemen in 1997 by President George W. Bush, says war has made an already poor country into the world’s worst humanitarian disaster. “The war is comfortably into its fourth year," she says. "Twenty-two out of 29 million Yemenis are drastically food insecure. They are on the verge of famine.”

Stephen Seche, who was US ambassador to Yemen from 2007 to 2010, says the country's infrastructure has been damaged and water systems have been "completely destroyed," he says. "A humanitarian catastrophe has unfolded, and the notion that we could now forcibly return Yemenis to a country that is falling into chaos because of conflict and all the attendant disasters that have accompanied that completely bollixes my mind. I cannot imagine how we could do that.”

TPS currently allows people from El Salvador, Haiti, Honduras, Nepal, Nicaragua, Somalia, South Sudan, Sudan, Syria and Yemen to temporarily remain and work in the US rather than return to face armed conflict or major natural disasters. The administration is ending the program for almost all of these countries, affecting over 300,000 people. It extended protections for people from Syria and South Sudan and is expected to decide on Somalia in addition to Yemen this month. Somalia, Syria and Yemen are also affected by a travel ban which bars most people from gaining visas to come to the US and has left US citizens and permanent residents unable to reunite with their families.

Yemenis make up less than half of 1 percent of those who currently have TPS.

“That’s the size of a small high school,” says Bodine. “They are students, they are professionals, they are agricultural workers, they are janitors. They are not a fifth column for terrorism. These are people who are trying to get away from the violence, the terrorism, and the humanitarian crisis.”

Some TPS recipients have expressed fear about returning to a country still at war.

In the Yemeni capital Sanaa, for example, people are frequently reported detained or disappeared by Ansar Allah, the rebel group also known as the Houthis. But residents must also endure frequent bombing raids by the Houthis’ enemies, Saudi Arabia and the United Arab Emirates.

“If you go back and stay in Sanaa, you have to decide 'fight with us or you are not with us,'" says Mohamed, a package delivery driver in the state of Washington. He fled Sanaa with his family in 2015. He says the Houthis were pressuring him to join their rebel force, and they would again were he to return. Mohamed — he asked that we use only his first name because he is concerned about his immigration status — says that in areas controlled by the Houthis' adversaries, Yemen’s US-backed government, there is corresponding pressure to join the anti-Houthi fight.

Yemeni men of fighting age have to choose one side or the other, he says. “For both of them, 'if you are not with us, you are our enemy.' You have to be yes or no. We don't have a choice.”

In 2016, the United Nations reported that 10,000 people had been killed in the fighting. While the UN number has not since been updated, the Yemen Data Project, an independent monitoring organization, estimates a death toll now of 44,000.

The US has no diplomatic relations with the Houthi government, but it has important ties with its adversaries, the exiled Yemeni government led by Abd-Rabbu Mansour Hadi and its backers, Saudi Arabia and the United Arab Emirates, which both buy weapons and receive logistical support from the US.

“We are a supporter of the Hadi government and the [Saudi- and UAE-led] coalition now, so we are deeply involved in the Yemen situation,” says Gerald Feierstein, who was a US ambassador to Yemen appointed by President Barack Obama. “And therefore I think Yemenis do have some legitimate expectation that the US would be sympathetic to their plight.” 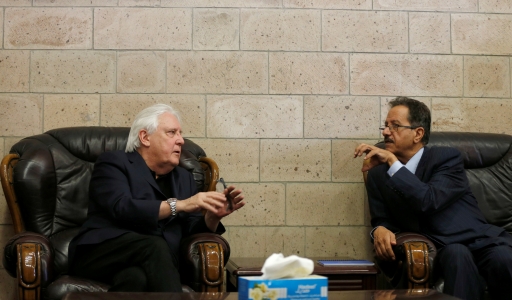 The new United Nations envoy to Yemen, Martin Griffiths, says he has made diplomatic progress in his talks with all sides in the conflict. Griffiths' focus has been on preventing a protracted battle for control of the country's main deepwater port at Hodeidah, where forces loyal to the Houthis and those who oppose them are poised for a showdown.

But peace is not expected by the time the Trump administration needs to make a decision Thursday, or even in time for the program's expiration in September.

“There is hope that the United Nations might be able to get a political negotiation started again maybe later this year,” Feierstein says. “But the conflict has been more or less stalemated since late summer in 2016, and we haven't seen very much change.”

In the past, the US State Department has advised DHS officials about conditions in countries and made recommendations about TPS eligibility. Whether and what it has recommended to DHS in this case has not been made public. A spokesperson told PRI "the authority to make decisions regarding TPS resides with DHS, after consultation with appropriate agencies. We do not discuss internal and interagency deliberations." On Friday, June 29, a spokesperson for DHS said, "The secretary has not yet made a decision."

The State Department does, however, continue to offer a warning on its website for Americans who might consider travel to Yemen.

“No part of Yemen is safe from violence,” it reads. “A nationwide cessation of hostilities deteriorated in August 2016, and high levels of violence, to include armed conflict, artillery shelling, and air strikes, now persist in areas throughout the country. There are also reports of landmines in areas vacated by withdrawing forces.”

More about TPS: As Trump ends Obama-era protections for Salvadorans, a family in Minnesota has few good options to stay together

More about the travel ban: ‘I lost trust in the system,’ says US citizen now unable to reunite with his Yemeni family