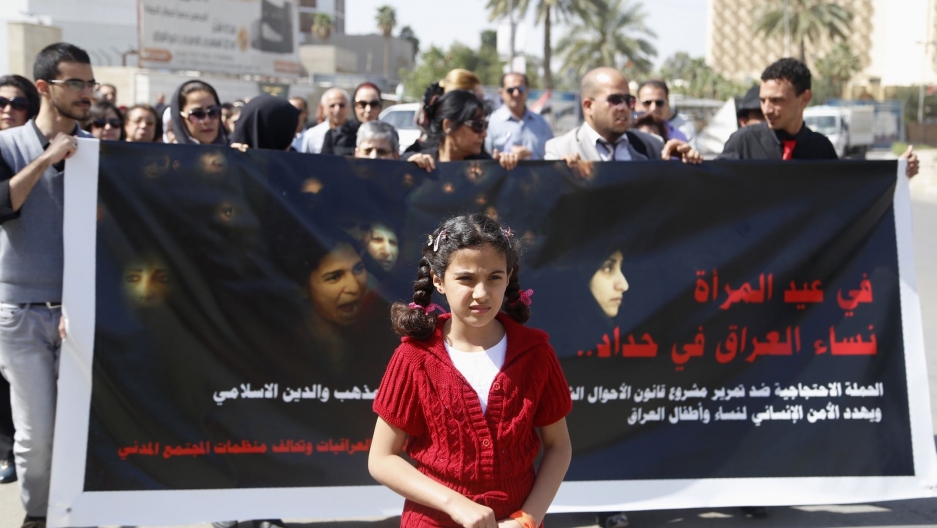 Protesters take part in a demonstration against the draft of the "Al-Jafaari" Personal Status Law during International Women's Day in Baghdad, March 8, 2014. About two dozen Iraqi women demonstrated on Saturday in Baghdad against a draft law approved by the Iraqi cabinet that would permit the marriage of 9-year-old girls and automatically give child custody to fathers. The sign reads, "Women are not for sale or purchase."

For young women like Farah Ismail, marriage was tantamount to a financial transaction.

“My father is a contractor who went bankrupt,” explained 22-year-old Ismail, who is from Baghdad. “We went to live in my uncle’s home. His wife suggested that it would be smart for me to marry her brother.”

“Dad felt this marriage was a way to show his gratitude to that family — it was his way to pay back the favor. I was only 13, while he was 30,” Ismail said, adding that her relatives at the time gave her cold comfort about her imminent wedding night. “On the day when the sheikh came to make the marriage, I cried a lot and loudly. They were just laughing and saying, ‘What’s wrong, he will not take you right now.’”

It's stories like these that underscore how times have been hard for women in Iraq.

Between 2013 and 2017, falling oil prices, the rampaging ISIS and other internecine conflicts shrunk Iraq’s gross domestic product from $235 billion to $197 billion.

In the same period, early marriage for young women and girls skyrocketed and the figures are startling.

In 1997, 15 percent of Iraqi women wed before 18, according to government statistics. That was six years prior to the US invasion that toppled its brutal but secular dictator, Saddam Hussein.

By 2016, two years after the outbreak of a sectarian Sunni vs. Shiite civil war and the rise of ISIS, who by then had imposed a harsh version of Islam on around a third of the country under its control — Iraq’s early marriage figure jumped to 24 percent, including nearly 5 percent who married before age 15.

Now, child advocates worry that the recent, inconclusive Iraqi election and recount — and the disarray it has left in government — will allow advocates of early marriage to reintroduce a popular bill allowing the different sects to set their own age of consent.

About 1 in 5 girls in the Middle East and North Africa marries before age 18, according to the United Nations. The practice varies across the region, from as high as 32 percent in Yemen to 3 percent in Algeria.

“It’s important to underscore the impact of conflict on the incidence of early marriage,” said Ivana Chapcakova, a child protection specialist with UNICEF in Iraq, who runs programs to reduce gender-based violence such as sexual exploitation, female genital mutilation and child marriage, including among refugees and people who've been displaced.

Iraq’s religious and ethnic conflicts have dispersed more than 2 million civilians, forcing families to flee their homes, separating breadwinners from their traditional trades and compelling children to drop out of school.

A 2017 study by the global, anti-poverty group, Oxfam, found a direct correlation between the rise of child marriage in Iraq and war-induced poverty and terror.

Many survey participants said arranging girls to marry their cousins was a coping mechanism to prevent daughters from wedding ISIS fighters. Others said giving daughters as child brides to jihadists would ensure their safety, access to public services in occupied territories and livelihood opportunities for the entire family.

In those circumstances, marrying off a mouth to feed makes sense, said Basma Habib, a feminist activist from Sulaymaniyah, a part of Iraqi Kurdistan where ISIS cells still operate despite the military collapse of the caliphate in the past year.

“There’s a reason we see higher rates for early marriage in displaced persons camps,” said Habib. “Poverty also forces parents to get rid of their daughters, thinking that she might obtain a better life and protection of a man.”

Some Muslim societies place a high value on a woman's “honor" before marriage, she added. “Families want to marry daughters off earlier to get rid of the danger that their girls might get a bad reputation.”

The religious argument for early marriage carried the day in Iraq’s parliament last November when lawmakers favored a measure to allow each of the country’s religious groups to set their own legal age for a girl to wed. For the majority Shiite sect of Iraqi Muslims, that age could be as young as 9. Just 13 of the 170 lawmakers present voted against it.

But there’s the widespread expectation that Shiite Muslim religious politicians will reintroduce the bill when parliament reconvenes this autumn.

Related: Child labor continues to be a pressing problem in Nigeria. Girls are especially at risk.

Islamic Virtue Party lawmaker Hamid al-Khudhari, a sponsor of the Iraqi marriage bill, has declared that marriage is “the best way to protect young women from rape and harassment by giving them the security provided by a husband and the blessings of religious matrimony.”

Critics insist lowering the age of consent for marriage age legalizes child sexual abuse and denies girls the opportunity to pursue education or join the workforce.

“The law violates international human rights conventions and is humiliating to women and enables pedophilia,” said Siham Wandi, a former Iraqi diplomat and child protection advocate. “I see no religious justification for such a law.”

But throughout the Middle East, fundamentalists have moved to try to lift marriage-age restrictions put in place in an earlier era when secular states set limits with the goal of improving the status of women, emphasizing opportunities for work and education aligned with nation-building development goals.

Late last year, Turkish President Recep Tayyip Erdoğan signed the “mufti law,” which allows religious officials to perform marriages once males and females reach puberty. The most recent UN statistics from Turkey show that 15 percent of women in the country marry before the age of 18.

In Egypt, Salafi clerics in rural areas have clamored to lower the marriage age from 18, arguing girls mature earlier.

Women should be younger than the men they marry, said Mahmoud Bahi al-Din, a leader of Ma’zun Sharia, an Egyptian group of conservative Sunni clerics.

“It’s unjust to make the age of marriage identical for men and women,” he said. “A girl’s womanhood develops early, so there should be at least a two-year difference between the bride and groom. A girl doesn’t have to marry a guy her age.”

Egyptian President Abdul Fattah al-Sisi opposes such a measure — in part due to fears in Cairo of a population explosion. Sisi has called on lawmakers to criminalize child marriage.

Still, more than half of girls in the countryside marry before turning 18, according to the National Council for Women, an Egyptian government agency. The country's Ministry of Religious Endowments — the state-funded Muslim authority — suspended an imam in October after learning he had performed more than 20 marriages of underage girls.

“I was wed at 14 in a marriage arranged by my parents,” said Nuha Oum Ahmed, 35, now living in Cairo with her husband and with three daughters. “These matches were considered normal in the small villages of upper Egypt. None of my daughters will marry before they are 18, and I will let them choose their own husbands.”

Reversing the trend will be difficult, said child protection specialist Chapcakova, especially because its victims are often young, uneducated and disempowered politically and socially. “Breaking away from the thinking that there is some benefit to girls from child marriage is going to take a long time and will demand a comprehensive approach,” she said.