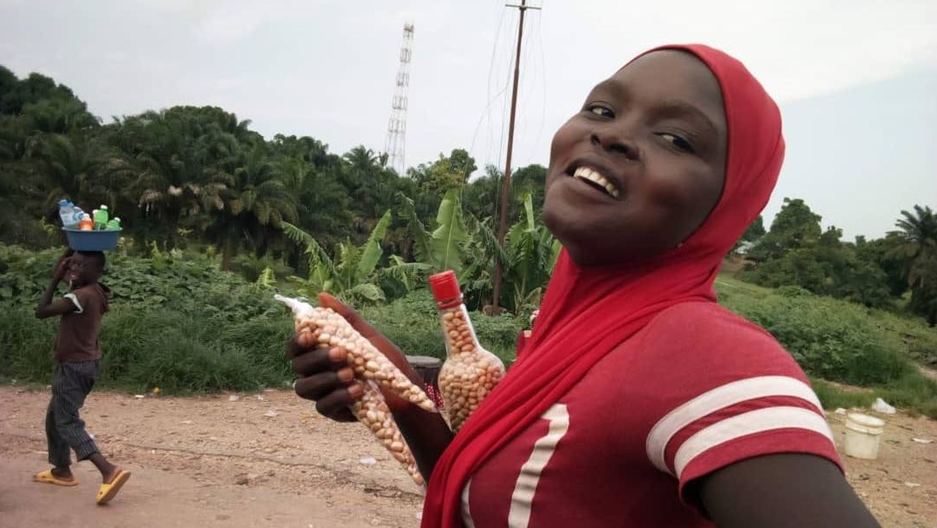 A young girl sells peanuts along the busy Abuja-Akwanga highway where she braves the scorching sun and heavy rainfall on a daily basis and faces the risk of getting run over by motorists, June 10, 2018, in Keffi, Nasarawa State, Nigeria.

Hadiza Musa, 14, carried a bucket of plastic sachets filled with chilled water toward a commuter bus.

“Every day, I stand here by the roadside, come rain, come shine, trying to earn money to help my parents,” said Hadiza. “It’s a risky business as sometimes accidents do occur. Last year, three girls were killed by reckless drivers.”

Hadiza is among several girls between the ages of 10 and 15 hawking at a railway crossing in Gudi, a small, agrarian community along the busy Abuja-Akwanga motorway in Nasarawa State in north-central Nigeria.

She and millions of other kids are why child labor remains a major source of worry in Nigeria, Africa’s most populous country.

More than half of Nigeria's 79 million children between the ages of 5 and 17 are put to work, including in hazardous conditions, according to a joint report issued in February by Nigeria’s National Bureau of Statistics and UNICEF along with a number of other organizations.

It's something to be deeply concerned about, say nongovernmental organizations.

“The high level of diverse and tedious jobs that children execute in dangerous circumstances is particularly worrying,” a UNICEF Nigeria statement says. “These jobs include being street vendors, beggars, car washers or watchers and shoe shiners. Others work as apprentice mechanics, hairdressers and bus conductors while a large number work as domestic servants and farmhands.”

For Fatima Usman, 7, selling chilled water along streets in Lafia, the capital of Nasarawa State, has been a major source of income — helping her widowed mother. Fatima faces the constant risk of being run down by a fast-moving vehicle.

“I have to sell pure water every day to help my mother towards feeding [the family],” said Fatima, before dashing across a busy motorway to sell water to drivers stopping for fuel at a gas station on the Lafia-Makurdi motorway.  “I lost my father two years ago and there is no one looking after us. We survive mostly from this. My mother does domestic chores to earn money.”

“They stand the risk of being abused, emotionally and physically,” said Usen, who is coordinator of the Child’s Protection Network. “Sometimes, they can get knocked down by vehicles. Sometimes, people lure them into uncompleted buildings and rape them. Sometimes, even in their houses, they offer to buy the whole items the girls hawk, and in return, they violate these girls.”

Only recently, Usen said, four men lured an 8-year-old girl selling peanuts on the streets of Gombe in northeastern Nigeria and gang-raped her.

According to a joint report of the Nigerian National Population Commission, UNICEF and the US President’s Emergency Plan for AIDS Relief, approximately 6 out of 10 street children experience some form of violence; 1 in 4 girls and 1 in 5 boys experienced sexual violence.

“There are several dangers these children face out there on the street,” said Usen. “People can deceive them; they can be abducted, kidnapped. Sometimes, they can get infected with HIV/AIDS. The prevalence rate is still high, and some people believe that having [a] sexual relationship with a minor is a cure. That’s a myth but they are doing it.”

Fatima, 13, of Angwan Rairayi in Lafia, experienced those dangers while selling Madidi, a local corn snack. She's a minor and a rape victim, so we're not using her last name.

“I was going about hawking Madidi one afternoon a year ago in September,” Fatima recalled. “I was approached by a man who indicated interest to buy the snacks. He asked me to follow him to his house. When we got there, he brought out 2,000 Nigerian naira [about $6], saying he’s paying for all that I was peddling but that he must have sex with me.”

When she refused, the man raped her several times, she said.

It's incidents like these that have child advocates so desperate to get these children off the streets and back into schools. But they say they are fighting a losing battle as people become more desperate due to falling oil prices hurting the economy.

In fact, Nigerian officials say widespread child labor in Nigeria, particularly in the northern part of the country, is due to widespread poverty, rapid urbanization and a breakdown in extended family affiliations.

At the same time, advocates say it's also the north's largely Muslim population that is resistant to the Child's Right Act and is why the act has not been fully adopted in Nigeria: The act protects children and sets punishments for offenders of child trafficking, child abuse, forced child labor and other violations of children's rights.

Rotimi Olawale, executive director of the African Youth Panel, a youth advocacy organization, says that 26 of 36 Nigerian states have adopted the act, with all 10 resisting in the north because parents see the act as Western in origin and contrary to their culture and religion.

That has led to predictable consequences, he added.

“It’s not strange that the ratio of out-of-school girls is high in the north compared to other [parts] of the country,” said Olawale.

Gombe State University political scientist Abdulkadir Saleh says the Boko Haram insurgency is a major reason girls don’t go to school but hawk on the street: Besides disrupting families, villages and local economies, there is fear of going to schools, a major target of the extremist group.

He added that the Muslim practice of polygamy was also a factor.

“This increases the burden on the family because if you have two wives and many children, of course, you may not be able to cater for their needs,” said Saleh. “They sometimes provide for themselves.”

Olawale said his organization is working in collaboration with local officials in the north to adopt the Child Rights Act and improve the situation for children.

Girls like Hadiza hope for that, for a better future.

“I would like to go to school and become a teacher,” Hadiza said, with a sparkle in her eyes. “I want to be able to work and earn enough to take care of my mother.”