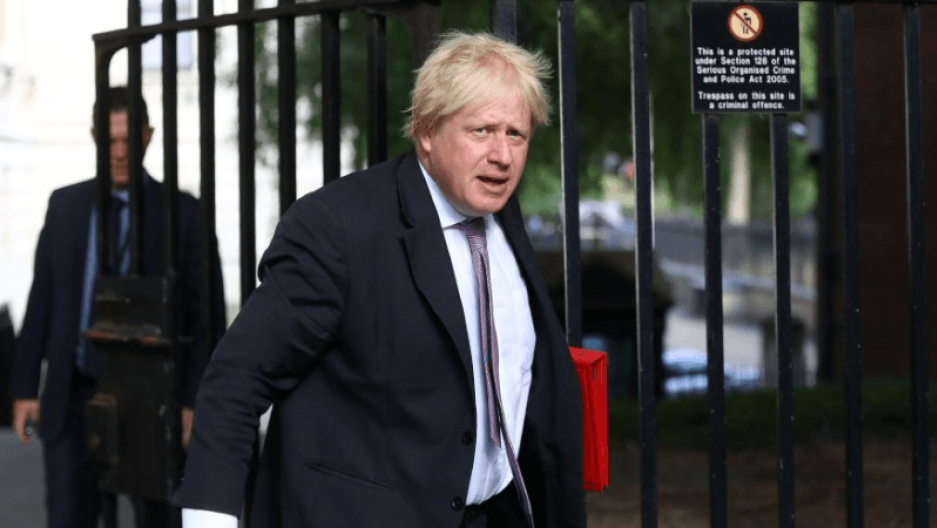 After a day when the eurosceptic foreign secretary canceled meetings for crisis talks at his official residence in central London, Johnson decided to walk from his job — just hours after May's Brexit minister David Davis did the same.

The two resignations leave May badly exposed at the top of a government unable to unite over Britain's biggest foreign and trading policy shift in almost half a century.

It also puts a question mark over whether the leader will try to weather the resignations and stand firm in her commitment to pursue a "business-friendly" Brexit, or will be faced with more challenges to her authority and calls to quit herself.

"This afternoon, the prime minister accepted the resignation of Boris Johnson as Foreign Secretary," May's spokesman said in a statement. "His replacement will be announced shortly. The prime minister thanks Boris for his work."

The departures raise the stakes for May, who believed that she had secured a hard-won agreement with her deeply divided cabinet of ministers on Friday to keep the closest possible trading ties with the EU.

But it soon began to unravel, when Davis resigned late on Sunday and launched a no-holds-barred attack on her plan, calling it "dangerous" and one which would give "too much away, too easily" to EU negotiators, who would simply ask for more.

With Johnson's resignation, a noisy rebellion among the ranks could gather steam. Many Brexit campaigners in her Conservative Party say she has betrayed her promise to pursue a clean break with the EU.

She now faces a decision — whether to change her proposal or stick by it and hope that she can face down the dissenters.

With less than nine months before Britain leaves and just over three before the EU says it wants a deal, May has been forced to show her cards that she will commit the country to pursuing the closest possible trading ties with the EU.

Her earlier reluctance to spell out her strategy was for fear of encouraging exactly this — angering one of the two factions in her Conservative Party that have sparred with each other since Britain voted to leave at a 2016 referendum.

Many eurosceptics accused her of siding with the "Remainers" in her cabinet — those who voted to stay in the EU and have been lobbying for a Brexit that would preserve the complicated supply chains used by many of Britain's biggest companies.

They fear a clean break would cost jobs.

But on the other side of the party divide, they feel that her words have not been matched by her deeds, proposing to negotiate a deal which could leave Britain still accepting EU rules and regulations without being able to influence them.

"I'm proud of both David Davis and Boris Johnson for standing by their principles," Scottish Conservative lawmaker Ross Thomson said on Twitter.

"The decisions we take now will shape Britain's relationship with the EU and the rest of the world for a generation. It's imperative we do Brexit right, no half measures!"

Earlier May's spokesman signaled that the prime minister would not back down over her agreed negotiating stance, saying May would now focus on moving the Brexit negotiations forward — a step EU officials and businesses have long called for.

"An agreement was reached by the cabinet on Friday and now we are moving forward to negotiate that plan," May's spokesman told reporters. "As the prime minister said ... we have set out our position and it is now the EU's turn to move and that she wants the EU to get serious in these negotiations."

Elizabeth Piper and William James of Reuters reported from London.