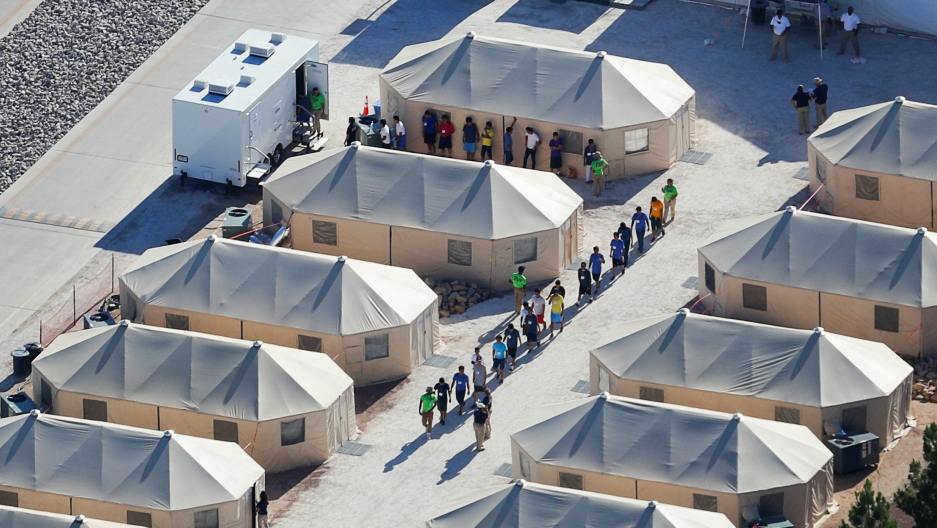 Immigrant children now housed in a tent encampment walk in single file at the facility near the Mexican border in Tornillo, Texas, June 19, 2018.

Shares in private prison operators CoreCivic Inc and Geo Group rose on Friday as investors bet on increasing demand for their services after US authorities asked about available capacity for the detention of immigrant families.

The US Department of Homeland Security's office of Immigration and Customs Enforcement (ICE) issued a request for information on Friday afternoon about potential facilities from different providers to accommodate up to 15,000 beds, ideally in several locations.

The move came after U.S. President Donald Trump issued an executive order on Wednesday aimed at ending his controversial policy of separating immigrant children from their parents caught entering the country illegally.

Under the order, which is likely to be challenged in court, families will now be detained together for the duration of their criminal and immigration proceedings. The latter can take months or even years to complete.

Shares in CoreCivic closed up 3.95 percent at $23.39, a nearly five-month high, in an unusually active trading day on Friday. The stock has jumped 11.2 percent in the last four days.

Rival Geo, which has gained 6.6 percent since Trump's executive order was issued, closed up 1.6 percent at $26.48, in a fifth straight day of gains.

The Oklahoma Board of Corrections is due to meet on Tuesday to discuss approval of a contract with Geo for its Lawton Correctional Facility, according to a notice on its website,

"It's more and more demand that continues to get snapped up, so states will be forced to get off the sidelines and get capacity under contract before it goes elsewhere," he said.

Immigrant families are currently housed in facilities in Pennsylvania and Texas that have a total capacity of about 3,300 beds and are now at 79 percent capacity, according to ICE. The U.S. military has been asked to prepare to house up to 20,000 immigrant children.

Geo and CoreCivic were not immediately available for comment.

‘They didn’t explore the world,’ says physician who cared for toddlers separated from their parents at the border

For a child migrant, days feel like a lifetime when you’re imprisoned and alone